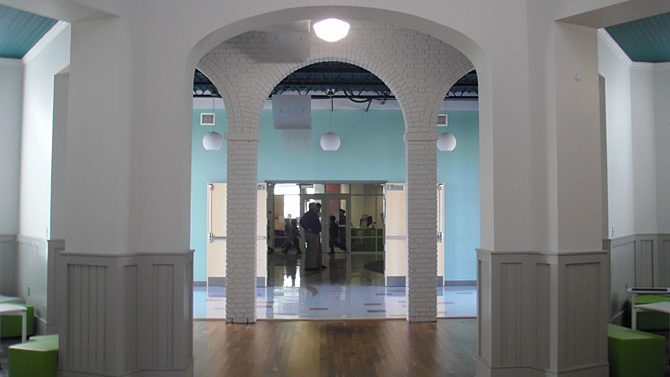 Not having kids, Barrow Elementary School only factors into my mind in regards to remembering to BYOB to nearby Cali N Tito’s—at least until I learned that the historic school building had just been renovated, and Principal Ellen Sabatini offered me a tour.

Built in 1923 and added onto shortly after, Barrow is one of the longest-standing schools in Athens-Clarke County. (Chase Street Elementary is the oldest, dating to 1922.). The 50,000 square-foot original building was renovated and an 84,000 square-foot addition built for $14.4 million during the 2012-2013 school year.

The original 1923 building is the rotunda in the center and the two wings radiating from it. At the time, the front of the building faced Rutherford—it now faces Pinecrest—and the entrance was a triple-arched arcade with a few steps leading up to it. In 1925, the back of the wings were added, though in the current orientation, that addition is on the front of the school. It almost doubled the number of classrooms.

Over the years, the school was expanded repeatedly, including large additions in the 1950s and early 2000s. Those later additions were made to solve the problem of an overflowing school and were not necessarily made with historic integrity and preservation in mind.

The later additions were demolished during the most recent renovation. All but the 1923 and 1925 portions of the building were removed, and since the 1925 addition blended rather seamlessly with the original building, it is generally considered to be original as well.

During the renovation to the historic rotunda, school officials discovered the beautiful truss work and several oculi (round windows) that had been covered up for years. The rotunda is now a beautiful focal point with the trusses and oculi left uncovered, visually reminding students, faculty and guests that the school is indeed historic.

Radiating from two sides of the rotunda are the original wings of the school, which house pre-K through first grade classrooms. The original ceilings, floors and windows, like the rotunda, had been covered up for years, so it was a quite a surprise when the original maple floors and board ceiling were found to be in great shape. It turned out that the carpet and drop tile ceiling had preserved them.

In addition, the original windows on the interior of the halls were discovered, too. The windows, found at the top of the walls, would have been propped open for air flow and used to help cool the classrooms before air conditioning. Since propping open windows is no longer necessary to cool off a hot and humid classroom, the windows were replaced with single-pane, nonmoving windows, and while they are not used for temperature control they do allow more light into the classrooms. Windows on the exterior of the building were replaced with historically accurate multi-paned double hung sash windows. The original plaster walls were covered; while they’re no longer visible, there is now space in between for modern wiring.

At the school’s original entrance, the triple-arched arcade and steps had been covered up by the 1950s addition when the front entrance was enclosed. Like the other historic pieces of the building, the arcade was in good condition. Painted white, it physically and visually leads one into the new section of the building.

The new sections of the school radiate from the rotunda just like the original school did. The new entrance to the school is nestled between the original wings; it is clearly a new addition, but a tasteful one. The 2012–13 additions replaced the previous additions over the years and still added enough space for nearly 450 students, containing second through fifth grades, the library, cafeteria, gym, a conference room, media center and several non-traditional learning spaces.

The school colors of turquoise and lime green are abundant throughout the school and are bright and lively. The library is fronted with glass walls and is bright and airy. The bookcases are only about elbow height but full of all the classics. They are also moveable, allowing for the library to grow and be rearranged as needed while making it easier to gather large groups of students for learning activities. Bright orange stools have convex rubber bottoms that give them bounce, allowing students to expend pent-up energy while reading.

Other features also make learning fun and interactive. The floor of the rotunda has a beautiful compass stained in different colors to teach students directions. There is also a large tile map of Georgia in one hallway that illustrates the state’s rivers. Another tile map shows Athens-Clarke County, and just down the hall is a cross section of a gigantic oak inlaid into the floor.

All this is because, in 2011, parents and preservationists came together to save the building when the Clarke County School District was considering demolishing it. As a result, Barrow Elementary received the Athens-Clarke Heritage Foundation’s President’s Award last summer.