Is the Chain Gang Taking Over Downtown Athens? 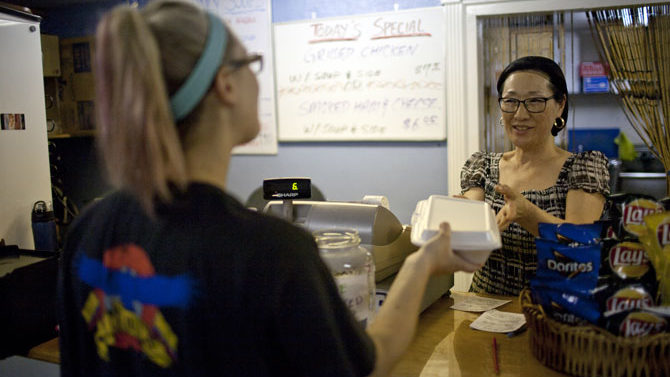 When I first moved to Athens more than 10 years ago, it seemed like almost every business downtown was locally owned; sure, Starbucks and Wild Wing Cafe were downtown and Gap had just moved out to the mall, but still, downtown was by and large local. It definitely gave Athens a unique quality that made it stand out in comparison to other towns. It was probably what made me and many other people fall in love with the city.

But locally owned businesses—Helix, Cookies & Company, Lee’s Wig Shop, Farm 255, Echo, Five Star Day, Sunshine Cycles and, this fall, Junkman’s Daughter’s Brother, just to name a few—have been closing or moving out of downtown the past few years. In some cases, they’ve been replaced by corporate chains that some believe are turning Athens into Anytown, USA. Others, though, believe that chains can complement the locally owned businesses so many Athens residents love.

Rents are rising downtown, according to Athens commercial real estate consultant David S. Dwyer, but only in what he calls the premium “Main and Main” locations, like Broad Street, College Square and Clayton Street. On the outskirts, they’re still affordable for many less-trafficked businesses, he says. “I would say that retail rents downtown vary widely,” he says. “Naturally, they’re going to be at their peak at the busiest intersections and most visible locations.”

In some cases, corporate chains may be the only ones who can pay the rent for prime locations and space in swanky new developments. “I think you need a good mix,” says Mike Hamby, an Athens-Clarke County commissioner and Athens Downtown Development Authority board member. “Some of those chains can pay the rent and be sustainable.”

The aforementioned Cookies & Company space on College Square, after a brief stint as a frozen yogurt shop, is now occupied by a locally owned Subway franchise. The West Washington Street parking deck includes nothing but chain restaurants on the ground floor: Yoforia, Waffle House, Fuzzy’s Tacos and Brixx pizza. Urban Outfitters is moving into a Clayton Street storefront that’s currently a sporting apparel store and once housed the Gap.

Shelby Clayton, a University of Georgia student from Stockbridge, says she always takes family and friends to local restaurants “to share that experience with them.” Emily Curl, a senior from Dallas, GA, says some of her “favorite memories with friends and family come from trying and hanging out at local restaurants downtown.” Catie Kill, a senior from Marietta, says, “I love exploring new places to eat and shop, because it makes the experience much more intimate and memorable. I’ve also found that employees tend to be much more accommodating and engaging at locally owned businesses.”

During the furor over a Walmart potentially opening in the Selig development downtown a few years ago, opponents feared that the retail giant would kill smaller downtown businesses. Some downtown business owners, though, don’t see chains as a threat. Aok Boyd, who runs the College Square sandwich shop A-OK Cafe, says she’s seeing increased traffic since Subway opened next door. She believes her regulars will continue to patronize her establishment because of the quality food she serves at great prices.

“In some ways, local businesses and consumers can benefit by the addition of reputable chains,” says Janet Geddis, owner of Avid Bookshop on Prince Avenue, a couple of blocks from downtown. “Businesses of all sizes tend to up their game when competition is introduced. It’s likely that consumers will end up with a better experience at chains and competing local spots once there’s more competition.”

While a little competition is healthy, Geddis also worries about “national chains coming in and taking over spaces once rented or owned by local businesses.” Some cities, such as San Francisco, restrict or even ban chain stores in certain areas, but that is not a step Hamby thinks is necessary here. “Chains bring people downtown,” he says. “It’ll make it to where the local business beside them can bring more people in as well.”

Developers know that downtown Athens’ uniqueness is their bread-and-butter and don’t want to do anything to hurt that quality, says Dwyer, who’s overseeing the mixed-use development under construction next to SunTrust Bank at Lumpkin and Clayton streets. “We’re in discussions with a lot of local tenants,” he says. The chains—including a grocery store Dwyer is “working fervently” to get—will complement locally owned downtown businesses rather than compete directly, he says.

The SunTrust development will benefit surrounding businesses by drawing more people to the area and replacing a surface parking lot that discouraged people from walking farther west past the Georgia Theatre with an unbroken line of pedestrian-friendly storefronts, Dwyer says. “If you bring more people downtown, you create a healthier business climate for everyone,” he says.

With consumers still conscious of how they spend their money in today’s economy, their decisions may not be based on whether a business is locally owned. Jason Ellis, co-owner and chef at The Branded Butcher, says he “likes to see people support businesses because they are a quality establishment, whether local or not.

“The economic environment over the last few years has created a new kind of consumer,” he says. “People aren’t necessarily afraid to spend money, but they are deciding where they’re happiest spending that money. I think it makes businessmen try harder, appreciate people more and be more concerned with quality products, service, atmosphere, etc. Fortunately for Athens, those businesses are, a lot of times, the local guys.”

Of course, the local guys are growing, too. Chains cut both ways. For every Fuzzy’s (a Texas-based chain with 78 restaurants in 10 states) or Brixx (with 20 locations in the Southeast), there’s a Barberito’s or Jittery Joe’s—small chains that started in downtown Athens and expanded into other cities. Athens has plenty of fabulous businesses that have reached well beyond the borders of our town to spread some of Athens’ charm to places not fortunate enough to be Athens.