What Not to Say to Ladies

I was jaywalking at 3 a.m. when an intoxicated young man expressed deep concern for my welfare.

“Whoa, whoa, whoa,” he slurred, stopping my progress. “What are you doing? Why are you walking alone?”

Taken aback, I smiled and shuffled on, amused at his words and relieved he was not one of the predators whom he evidently feared for my sake. He had a point—when I walk to my car after work, any man might be a creep. I keep my keys in hand “just in case,” but a more persistent threat than physical assault is verbal harassment.

It happens everywhere and at all hours, but downtown is something of a catcall hotspot. Back in May, after my first late shift at my new job, I walked toward my car—and a gaggle of men loitering outside of Toppers. Cue discomfort. 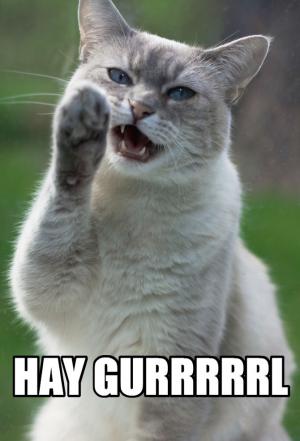 “Hey, girl. What’s in the bag?” one said, referring to the sack of bagels in my hand. I ignored him. “What’s in the bag, girl?” he demanded again, louder. “What, you’re not gonna share?” his buddy piped up. A third voice: “I’ve got something I’d like to share with you.” Laughter.

Now I go out of my way to avoid those guys. But of course, those guys are everywhere. Last week, a posse of pubescent boys decided I was their “baaaby.” Alright, teeny-boppers. Who lets you out past midnight, and who is teaching you how to approach women?

Needless to say, all the hollering has been getting to me. So I, being a millennial, changed my Facebook status. I asked my friends if they had any creeper stories to share. Of course they did.

Morgan Davis was awaiting a late-night bus at the Arch when she was accosted by a drunk man of moderate age and misplaced lust.

“He kept scooting closer and closer to me, and he said, ‘Hey,’” Davis says. “I ignored him because he was giving me the creeps, so he scoots way closer and is almost touching me at this point, and he says, ‘You’re a youngun, aren’t ya?’ I decided it was time to book it home, no bus needed, but my roommate took a second to pick up on that. Before she started leaving, he scooted up close to her too and said, ‘She’s a runner. Are you a runner?’”

Ew. I don’t know if a successful come-on has ever included the word “youngun.” Second, of course they run from you; you are creepy.

Adina Solomon has met a few weirdos in her lifetime. She has a special technique for dealing with them.

“I was hanging out with a friend, and we’re just walking down the street, and a guy comes up to us and starts telling us how beautiful we are and all this other stuff,” she says. “He’s like, ‘You guys are gorgeous,’ and we’re like, ‘OK’ Then he asked us our names, and I gave him a fake name. I have a fake name I go to. I think everybody should have a fake name.”

Some guys aren’t just creepy talkers; they’re creepy stalkers. Solomon was walking downtown when she noticed a man following her. She ducked into another store and emerged once she’d lost him. Keeping a moniker for street-side chatterboxes is a good way to ward off unwanted friend requests, but it doesn’t do much good in situations like that.

Davis, too, has been detained by the manly pursuit of beauty. Walking back from Ciné after a Gonzorrific showing, her friend (the same one as before) was detained by a middle-aged man (a different one from before).

“A man grabbed her by the arm as the rest of us crossed the street and told her she was beautiful,” Davis says. “He held her long enough that she had to jog to catch up with the group after she pulled away.”

Cailin O’Brien was leaving downtown when she met her first almost-fiance.

“It’s really not an OK excuse,” she says. “I have been drunk, and I’ve never, when I was drunk, had the urge to be super creepy or grab someone… and say something to them that I knew would be creepy. I don’t know how drunk or gone you have to be to do that. I think they’re creepy people getting drunk and using it as an excuse to do creepy things.”

But at least O’Brien’s, erm, suitor had manners (sort of). Killian Ross wasn’t so lucky.

“I was walking alone to meet some friends downtown, and a guy who looked homeless was like, ‘Hey. Do you wanna have sex with me?’ really gruffly,” she says. “It was scary.”

Ross gave him the finger and moved on, but there wasn’t much more she could do. Confronting creeps is frustrating that way; what’s a girl to do, reason with them? Hope a bystander speaks up? That doesn’t happen much. Nah, we just put on our sternest faces and avoid man-clusters at crosswalks.

Jaywalking is endemic in this town, but street harassment probably worsens it. Not only have catcallers turned otherwise innocuous women into key-wielding vigilantes with pepper spray guns, they’ve made us into street-crossing outlaws too.

Maura Friedman was walking near the Snow Tire building with her boyfriend on a Saturday afternoon when a driver honked his horn and shouted at her. Her boyfriend was upset, but she was unfazed.

“I don’t remember the specifics now, but I know it left no room for interpretation as to the intention of the honk,” Friedman says. “It reinvigorated in me how not-OK street harassment is because, as a woman who lived downtown and commuted exclusively by walking, I was so used to being hollered at that I was sort of numb to it.”

Women frequently warn one another not to walk alone at night. Rape statistics and urban legends are thrown around like sacred, scary parking lot scripture. “Travel in groups,” we’re repeatedly told. “Avoid alleys.” “You’d better get some pepper spray.” I wonder if boys receive this much instruction from men on the subject, if they are continually told to avoid doing things that might get them mace-faced late at night.

It’s not that hard; the difference between a compliment and harassment is pretty clear.

“I get that there are plenty of social situations in which one may or may not want to be approached—bars, parties, etc.—and that those can be sticky situations for people trying to meet others and be respectful, but yelling at a woman on the street is never OK,” Friedman says.