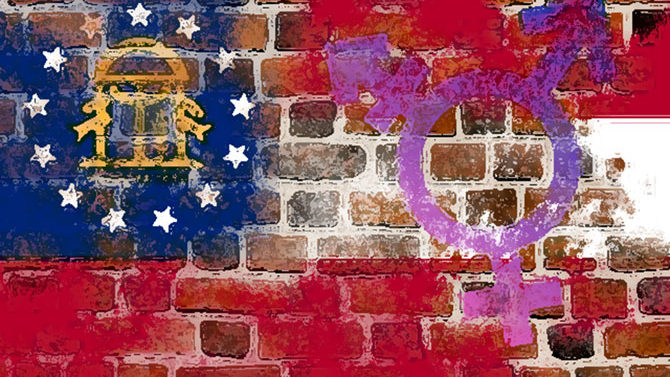 For Caden Cruze, each day is a struggle to claim his identity.

Cruze, a 2012 UGA graduate, began his “official” transition to living as a man last spring. “In various ways I realized I wanted to be male long before that, but I never had the words for my feelings,” he says. “I was such a tomboy growing up, but I never knew it was possible for me to live as a boy until the past few years. It got to a point where I just knew I couldn’t go on any longer without becoming a man.”

It’s not an easy journey. Cruze says some acquaintances continue using feminine pronouns around him. Every day brings new challenges to living the life he was meant to live.

“I will still have to inject myself with testosterone once a week, every week for the rest of my life,” Cruze says. “So there are constant reminders that I was not born into the person that I want to be—I have to fight every day for who I am.”

Athens isn’t the worst place to be trans, but it isn’t the best place, either.

“I think that, relative to other places in Georgia, trans people have a far better chance of being accepted, treated well and feeling welcome in public spaces,” says DeeDee Kane, who chairs the lesbian/gay/bisexual/transgender rights group UGA GLOBES. “Atlanta and Athens are probably the safest places for a trans person to be visible in Georgia, but that may not be saying much.”

Many people have trouble separating gender, sex and sexuality. And even when someone recognizes the difference between gender identity and biological sex, the concept that gender exists on a spectrum can be mind-boggling for those who’ve never questioned theirs.

“Gender is a social construct, and sometimes people have a hard time wrapping their heads around that,” Cruze says. “Gender is so ingrained in us. What’s the first question a woman hears when she says she’s pregnant? ‘Is it a boy or a girl?’ Try to have a conversation and not mention gender. You can’t have the simplest interaction and it not come up.”

Cruze says no one close to him was particularly shocked when he came out as trans, but he decided to change jobs upon beginning his new gender expression. “Ultimately, I think making a huge life change and beginning a new job just made the most sense,” he says. “I didn’t have a history of being female at my new workplace. I got to shed my old identity—that I never felt comfortable as—and start fresh.”

Being trans means facing prejudice. Trans people deal with everything from shameless stares and verbal harassment to physical violence, all because of other people’s—even strangers’—opinions about their gender identity.

“I think there is, of course, a lot of misunderstanding in the general UGA/Athens community,” says recent UGA grad Vyvyan Dickens. “And no, I don’t feel safe going downtown or things like that, ‘cause I’ve had a few kinda rough experiences with strangers. But I think it’s kind of a common thing with trans women out in public. People will police your gender, call you out for your gender expression.”

Compared to the general population, violence against trans people is very high. A 2014 report by the National Coalition of Anti-Violence Programs revealed that, for the past five years, transgender women and trans people of color have disproportionately been the victims of deadly violence.

Even basic things like finding a doctor can be difficult, Kane says. “I do know that trans people have to be careful about who they choose for a health provider and how open they are in those spaces even, so Athens has a long way to go in understanding how to welcome people and their differing identities—like much of the United States.”

While any trans person is likely to encounter prejudice at some point, trans women have a separate set of challenges. “Our experiences are very different,” Dickens says. “A trans woman, their experience is one at the intersection of womanhood and transness, or misogyny and transphobia. So trans men gain access to certain privileges by transitioning, whereas trans women are in a lot of danger for being who they are. And violence against trans women is very different from the violence that trans men face.”

On the other hand, being a transgender man can come with unwelcome benefits. “I’ve noticed I benefit from white male privilege when I pass as male. I pass almost 100 percent of the time these days,” Cruze says. “Male servers at restaurants and male employees of grocery and retail stores, etc., call me ‘man,’ ‘bro’ and other ‘dude’ terms. The men that I encounter just seem nicer to me now. I don’t know if it’s a brotherhood-type thing or what, but I get treated better now that people don’t read me as a butch lesbian. I’ve also noticed that women are quick to get out of my way—at the grocery store, for example—and apologize for being in my way.

“I think if strangers knew I was trans, I might get treated differently or badly sometimes, but I’m lucky because I usually pass as a cisgender man now,” he says. “As messed up as it is, I usually get treated better now that people see me as a man. And being a white man helps, which is something that really bothers me. I now benefit from racism, misogyny, heteronormativity and patriarchy. It’s unsettling.”

In addition to experiencing harassment, many trans people find themselves the victims of discrimination in the workplace. A 2009 survey by the National Center for Transgender Equality and the National Gay and Lesbian Task Force found that 97 percent of respondents reported experiencing harassment at work, 47 percent had experienced an “adverse job outcome,” and poverty and unemployment rates amongst respondents were twice those of the general population.

“There are colleges, corporations and government agencies all over the place that are instituting protections, rights and equal access to people of all genders,” says Diego Wolf, another university alum. “Yet many of the hate crime prevention and protection acts that are in effect across the U.S. fail to include gender identity as a qualifying attribute. I find that extremely disturbing.”

“I never made it to the drug test,” he says. “Once the background check revealed that I was not legally the gender I presented, the offer was gone. It was later disclosed to a friend of mine, the one who got me the interview, that the ‘official’ reason I didn’t get hired was that I failed the drug test—the one I never took.”

Although Athens is certainly less dangerous for and more accepting of trans people than other cities in the Deep South, UGA is the real hub of acceptance. While the Equal Opportunity Office and Office of Institutional Diversity are obvious resources for any UGA employee, GLOBES is an independent organization composed of LGBT and allied faculty and staff. The university’s LGBT Resource Center serves queer students, and Lambda Alliance is a student group dedicated to supporting the LGBT community at UGA and in Athens. These organizations provide advocacy opportunities and safe spaces, and through them many trans students are able to find a sense of community.

“It really allows you to be around supportive people,” Dickens says. “I think that’s incredibly vital. I’ve been really intentional about surrounding myself with supportive people in a supportive space and trying to avoid that discrimination or hatred that you can come across.”

As awareness of and sensitivity to trans issues increase, members of Athens’ LGBT community look to the city and UGA to lead the way in creating a safe and welcoming environment for trans people. Gender-neutral student housing is one place to start, Dickens says, and it’s important to make sure trans women are welcome in women’s spaces on campus.

“And teachers,” she says. “If someone comes up to them and says, ‘Hey, this name on the roster is not my name—this is my name,’ that the teacher won’t fight them over that.”

One need everyone seems to agree on is gender-neutral bathrooms.

“That may sound ridiculous to some people, but before I passed as male 100 percent of the time, I didn’t know which bathroom to use so as not to make other people uncomfortable,” Cruze says. “I was scared I wouldn’t pass in the male bathroom, and I would get weird looks and rude comments from women… I used to just never use the restroom in public, and I can’t tell you how uncomfortable that is.”

UGA has already begun providing gender-neutral bathrooms in some buildings, and members of the university’s trans community say the school seems open to further progress. Larger external challenges, though, may be tougher to overcome.

“Specialized training focused on how to successfully interact with transgender people should be a requirement for all government positions regardless of level,” Wolf says. “Many of the issues that transgender people face are not things that can be instituted or managed on a local level—but those that can be, should be.”

Harmful ideas about gender are related to other harmful ideas about sex, sexuality and race. They may only stop persisting through a long process which challenges deeply ingrained assumptions and changes individual minds. “I doubt there will ever be a unanimous global acceptance of one another,” Wolf says, “but we can hope.”

Interested in learning more about gender identity and how to discuss it? There’s a lot to learn, but here are a few terms to get you started. All definitions are adapted from the GLAAD Media Reference Guide.

gender identity — (n.) the internal sense of one’s gender. Most people identify as either a man or a woman, but for some, their gender identity does not fit neatly into either of those choices.

transgender — (adj.) an umbrella term for people whose gender identity and/or expression differs from what is typically associated with the sex they were assigned at birth.

cisgender — (adj.) describes people who are not transgender.