Parkour Catches On In Athens, but It’s Not All Fancy Flips 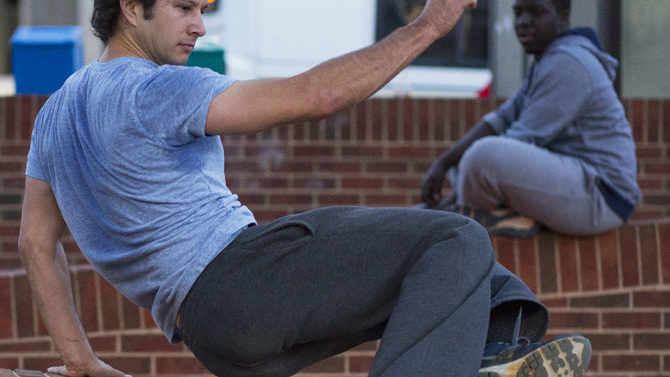 MTV and YouTube hooligans might lead one to believe parkour is all about conquering tall buildings, risky jumps and flashy flips, but Athens practitioners keep their heads a little closer to the ground.

“The definition, by the books, is efficiently moving through an environment,” Jimmy Hansen says. Sometimes getting from point A to point B requires running, jumping or climbing over obstacles, but efficiency is the goal.

As parkour has grown more popular, however, the emphasis has shifted to personal expression. “It’s really evolved so much more than that,” says Ernesto Thomas, a university student and Athens Parkour Club member. “Now it can be whatever you make it. It’s really about adapting to your environment and expressing yourself through your own movement.”

Hansen, a UGA web developer and Athens Parkour adviser, embraces club members’ creativity. “I kinda teach people to get really good fundamental functional strength,” he says. “What they do with that is really up to them. And I love seeing different flavors.”

Hansen began practicing parkour at UGA in 2007. After a year and a half, the small group began to fracture. “So even though I felt really unequipped to, I led the group back then,” he says. In the years since, he has improved his own skills while training many new practitioners in movement.

As the Athens Parkour Club’s de facto but reluctant coach, he leads the group in drills and games. Namely, tag—hill tag, zombie tag, amphitheater tag, regular tag, “any kind of tag in some fun environment.” There is also “rail shambo”: “We’re all standing on a rail, and the last man standing wins,” he says. “So you can imagine some of the crazy stuff we do to knock the other guys off.”

These games have a purpose. “What hill tag amounts to is HIIT, high-impact interval training, and what [rail shambo] amounts to is balance,” Hansen says. “When you’re wobbling around doing your best to stay up. So it’s really a disguise on getting a whole lot of exercise and having fun.”

But before any new parkour-ers, known as traceurs, attempt such shenanigans, they are schooled in falling technique and good form. “I really try and train for safety,” Hansen says. “I train people at ground level. I’m kind of like the grandma—I start people really easily. But some of these young guys, they don’t have a good risk assessment yet, and they may just do things that they’re unprepared for.”

Ankle sprains and bruises happen, Hansen says, but in general, members of the group know their limits. “When I first started, I was definitely capable of a lot more than I did at first, but I was really just terrified of falling. It held me back so much,” Thomas says. “And once I started to gain confidence, I saw a huge spike in my skill. But yeah, I’d say fear is a huge part of it. And like in any sport, the fear doesn’t ever go away—it just gets easier to deal with.”

With many Americans’ parkour exposure limited to YouTube show-offs or that one episode of “The Office,” misconceptions prevail. Thomas says the most common question he gets is if he can do a flip. “That’s not really my thing,” he says. “I guess people associate parkour with flips and flashy stuff like that, and that is a part of parkour, but it’s not what parkour really is.”

French naval officer Georges Hébert was the original traceur. His personal motto, “être fort pour être utile,” has become a tenet of modern parkour. “It means ‘being strong to be useful,’” Thomas says. “That’s kind of the whole philosophy I like to abide by in parkour. It’s more about functionality for me.”

Functional athleticism is just one of parkour’s appeals. The sport attracts problem solvers, adrenaline seekers and folks just looking for a workout. But Hansen says dedicated practitioners have some things in common.

“My job is finding patterns, and I’ve noticed one amongst all these years and all these people,” he says. “People typically have spontaneity, they like adventure, they like taking risks, they love being outside, they love moving—there’s a lot of energy involved. At least, those are the ones that stick around.”

The Athens group, which trains on campus, has a good relationship with UGA police. “I love the whole scene here,” Thomas says. “The cops are really chill about us jumping around and stuff like that.” 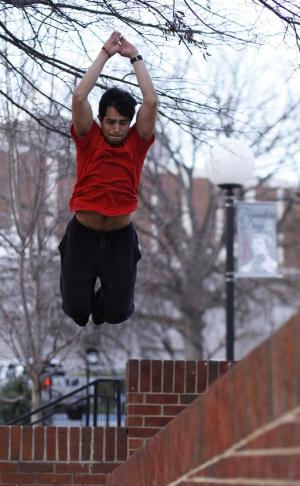 A concerned citizen or two has directed cops in his direction, but for the most part onlookers aren’t alarmed, and law enforcement knows not to worry about groups of young people balancing on and jumping over handrails. “It’s mostly when I’m alone that I get approached by an officer,” Thomas says. “I guess it looks sketchy, seeing somebody jumping around. But if it’s in a group, [passersby] will just stare at us and walk away.”

Julian Hames, a former Athens traceur who now lives in Sandy Springs, doesn’t have it so easy. He trains at buildings like the CISCO and Wells Fargo headquarters, where people are less accustomed to the sight of baggy-pantsed youths performing feats of creative athleticism.

“A lot of people don’t understand what we’re doing. We kinda look like we’re loitering sometimes, just kinda standing around in sweatpants,” Hames says. “I’ve noticed so far, if I wear maybe tighter sweatpants and my Ninja Quest shirt, and it’s just me, I usually don’t encounter too much [opposition]. But if I bring some of my friends with me that have, you know, backwards hat, baggy clothes—we tend to get kicked out of places. At first I was really resistant to getting kicked out, but now we just move to another spot, give them space and come back later.”

Being mistaken for trouble-seeking hoodlums is frustrating, but it’s part of parkour’s history as a discipline traditionally performed in public settings. Some practitioners even feel that the emergence of indoor training facilities conflicts with parkour’s focus on adaptation, creativity and freedom. But in urban environments, the sport’s image is often associated with delinquency and vandalism.

“I think what people think is that we’re there to break stuff and destroy stuff,” Hames says. “I think what they don’t realize is if we break it, we can’t use it. So I mean, we don’t want it to break either. We have a huge respect for the architecture, because we’re jumping around on it.”

Although parkour competitions occur overseas and in Canada, they’re not so big stateside. Athens’ traceurs aren’t too competitive, anyway. “Here it’s more of everyone is just training together and having fun,” Thomas says.

Athenian parkourians may keep it simple, but the sport is popular enough that Red Bull’s international Art of Motion competition is nearly a decade old. The comp, which most recently occurred in Greece, focuses on parkour’s acrobatic aspects. “It’s more free running, trick-based,” Hames says. “Of course when Red Bull gets into it, they’ll take whatever’s popular, not so much what the activity is.”

Americans are slowly getting in on Europe’s parkour psych. Pros like Jesse La Flair and Cory DeMeyers are becoming YouTube and stunt-world famous and embarking on nationwide tours, with documentaries like From Here to There and shows like “American Ninja Warrior” piquing interest in the sport. “It’s already a lot bigger than it was when I first started,” says Hames, who has been sprinting at obstacles since 2010. “When I first started, it was all forum and Internet-based. You kinda had to be a nerd to know what it was.”

Increasing popularity has led to the creation of parkour gyms. Hames works as an instructor at Ninja Quest Fitness, a parkour gym in Marietta that began as an “American Ninja Warrior” training facility. Gym clients vary in age, fitness level and motivation. “At first when I got started, I thought it got the adrenaline-junkie type person, but not anymore. I’ve seen so many different types of people get into it.” he says. “It can appeal to everybody—everybody wants to progress,” he says.

“When I first started, a couple years in, I wanted to be the best, just like any athlete, I guess. I wanted to be like, the LeBron James of parkour,” he says. “I quickly realized that some people have better genetics than me. Some people are gonna be bigger and stronger, and there’s nothing I can do about that. So now I just wanna be the best coach.”