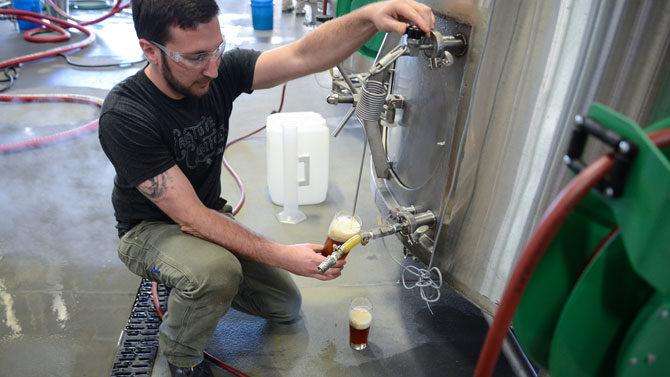 Creature Comforts’ David Stein pours a beer from a tank.

Craft beer brewers have reached a deal with alcohol wholesalers that will allow breweries to essentially sell beer straight to consumers, according to the AJC.

The Georgia legislature passed a law last year allowing breweries to include beer to go with tours, rather than merely letting them drink free samples on-site. Craft breweries hailed the law as making Georgia more competitive for this growing industry; most other states already allowed breweries to operate pubs and/or sell beer to go.

However, after meeting secretly with the middlemen in our state’s three-tiered distribution system (producers, wholesalers and retailers), the Georgia Department of Revenue administratively gutted the law, barring breweries from charging different rates for different tours depending on how much beer was included in the package. The change, made without input from breweries, led to widespread confusion, and many of them canceled special events and stopped offering tours that included beer to go.

House Speaker David Ralston had said the legislature would take up the craft-beer bill once again if DOR didn’t change course, but apparently that won’t be necessary.

DOR will issue new rules that once again allow variable pricing for tours, special events at breweries, the sale of food on-site, ticket sales via third parties and the use of social media to inform consumers about where to buy their products or advertise special events, the AJC reported.

Athens Power Rankings for the Week of Jan. 25