Tiny Houses Could Be Huge, but Rules Stand in the Way 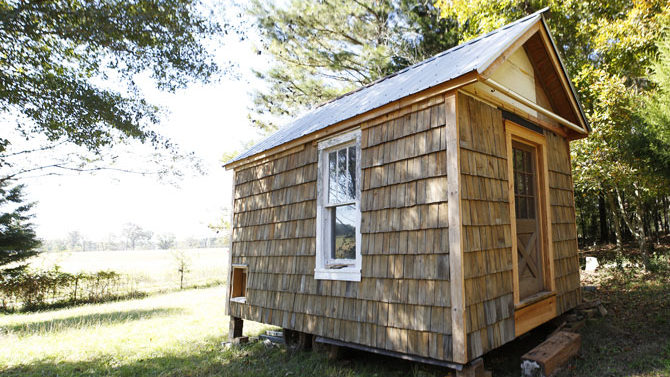 Tiny houses have entered the Pinterest daydreams of many an American over the last few years. Television programs like HGTV’s “Tiny House, Big Living” and “Tiny House Hunters” showcase the benefits of living in small spaces—often smaller than 300 square feet—and tiny house communities have sprung up outside of progressive cities throughout the U.S. UGA is even offering a course on tiny house construction this semester.

People choose to go tiny for reasons of simplicity and environmental sustainability, but John Kernohan says the reason for the lifestyle’s entrance into the mainstream is its financial viability.

For the last three years, Kernohan has shared 304 square feet of living space with his wife, Fin Davies, and their five cats. After gaining an online following by documenting the building of their home near Dublin, GA, online, they founded the Georgia Tiny House Association, which offers support and information for potential and current tiny-housers. In March 2016, the association will host the first Georgia Tiny House Festival, a celebration and showcase of tiny building and living.

Though the worldwide movement is growing throughout the U.S. and in Georgia, Athens’ would-be tiny-housers are out of luck at the moment. There isn’t a legal precedent for how to approach tiny homes, and they don’t fit well into the books. When viewed as houses, they violate building codes about size and mobility; when viewed as trailers, they come into conflict with intown zoning regulations.

“Typically I think where you’re seeing them are very rural lots out in the countryside, out on a farm, something like that, where just in general people are a little less interested in what their neighbors are doing,” says Athens-Clarke County planner Marc Beechuk. “I think that’s one of the other things that is a balancing act for our zoning code—the rights of the personal property owners with what their neighbors are gonna complain about.”

But Athenian proponents of tiny living insist their homes would only benefit the city. Smaller living expenses would mean more disposable income, which would enable greater spending at local businesses, says one of them, Paula Loniak. The houses themselves, she argues, would contribute to Athens’ aesthetic.

“They’re not eyesores. They’re nicely built in most cases,” she says. “I guess there could be some rules or whatever to ensure that they’re not gonna be an eyesore for the rest of the neighborhood or wherever they’re put. But that’s the problem—where are we gonna put them?”

Loniak says she wants to simplify her life by downsizing to a tiny home, but another major draw is the financial freedom of owning a house that, if she builds it herself, might cost as little as $12,000. Athens, with ever-rising rents and property values, is becoming increasingly less affordable for longtime residents.

“It seems like all the building that’s going on in Athens is geared towards the UGA students, and it’s not taking into consideration the people that are gonna be here permanently, for more than four years,” Loniak says. “I want to stay in Athens, and I’m getting priced out.”

The Price is Right 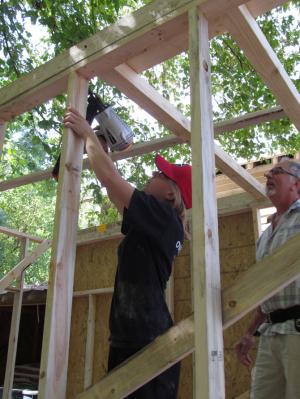 “It’s worsened a bit, because you have students competing with year-round residents for housing,” says Skobba, who studies low-income households and communities and their housing options. She is also one of the professors teaching the tiny house construction class this semester. It doesn’t help that rental assistance programs “haven’t kept pace with the demand or the need, either,” she says.

A tiny house could be just what Loniak needs, and she’s bringing other Athenians on board. There are 68 tiny-housers in her Athens Tiny House Meetup group, and she recently brought up the inability to build tiny at an ACC Commission meeting. If others bring the issue to their commissioners’ attention, she hopes, intown tiny living could become a reality.

“One of my biggest concerns is our intown neighborhoods becoming less and less affordable for regular folks and for our creative class,” says Commissioner Melissa Link, a longtime advocate for affordable housing and an enthusiastic supporter of Loniak’s proposals. “Tiny houses, I believe, could be a very important prong in a multi-pronged approach to affordable housing in Athens.

“The people that put Athens on the map by creating this arts and music scene, part of the reason they settled here is because we had these great neighborhoods intown, near our commercial corridors and right near downtown, where they could all live in close quarters, which is what’s necessary for that creative environment,” she says. “Creative people feed off each other. And they’re getting dispersed to the suburbs, or they’re moving to other cities.”

Even as swanky complexes for college kids take over the downtown area, rents, home prices and property taxes for everyday Athenians continue to rise in many neighborhoods.

“Honestly, I believe that diverse neighborhoods are healthy neighborhoods,” Link says. “They’re healthy communities. And I don’t wanna live in a community where artists and musicians and restaurant managers and schoolteachers can’t afford to live.”

While pre-built tiny homes can cost upwards of $60,000, they can be built for much less, and the utilities are cheap. They are also small enough, Link says, to be placed on lots too small to legally hold conventionally sized houses.

“We’re gonna have to have a real come-to-Jesus moment about our intown density and balancing the preservation of the character of our neighborhoods,” she says. “And what little green space we have intown, versus the desire to pack more people into our intown neighborhoods.”

Some cities are using tiny houses to combat homelessness. Portland, OR has Dignity Village, a community of low-rent tiny homes in what was once a tent city, and the Occupy Madison Build Initiative is building a tiny village for the homeless of Madison, WI.

Link says tiny houses have potential for some of Athens’ poverty problems, too. She cites the example of Oscar Newman, the New York architect who opted in the ‘80s to build townhouses for Yonkers’ poor instead of high-density apartments.

“His theory was that when people have their own, they protect it,” she says. “So when you offer affordable housing that has a front yard and a porch and a backyard, you’re not gonna get all the ills that you see in public housing projects, where you’ve got people living in boxes in the sky. People will protect what they consider their own.”

Tiny homes could be one approach, but they certainly have their limits. “Literally, they’re tiny houses,” Skobba says. “So they really work best for single individuals… To really meet the need, you have to have a larger scale than is probably possible with tiny homes.”

And then, of course, there is the problem of where to put them. Though tiny-house aspirants might like to see a change in zoning regulations, that could be a years-long process. And tiny housing is still so new that it’s hard to say if the demand is here to stay.

“I don’t know that this is a fad, ‘cause this could very well be a trend,” Beechuk says. “A lot of folks are looking to become more economical in their housing choices, and I think this might be one far end of the spectrum of being economical. But the zoning code—it’s a moving body, but it’s a slower moving body, because we’re not just gonna change it every few months because something’s really popular.”

It’s also tricky, he says, that the housing needs of permanent residents are sometimes in conflict with those of UGA students. “Of course, there’s also the balance of the Athens community and the student community,” he says. “It has a lot of benefits but brings up a bit of turmoil.”

Adds Skobba, “We have a very high poverty rate here in Athens, so we have a lot of low wage earners trying to compete in the housing market with college students who have more resources available.”

It Can Be Done

Peter Hartel is a rare Athenian who actually does own a tiny house. The 204-square-foot dwelling sits behind his main house in the Bloomfield district, and to build it he encountered regulations not only from the Planning Department, but also from the Historic Preservation Commission. He worked with both groups to build the house to code, but it was, he says, “a nightmare.”

“I’m sitting here acknowledging that I live in a historic district, and that I had to conform,” he says. “And that’s fine. But in my heart, I would have been better off buying another piece of property and building the house that I really wanted to build.” 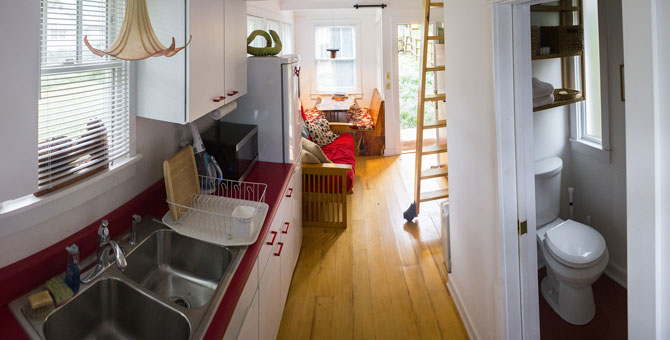 Peter Hartel owns one of the few tiny houses in Athens. He says it was a “nightmare” to get it approved.

Living in a historic district meant Hartel ended up with a guest house that looks very much like the main one. Historic preservation standards forced him to leave out much of the whimsy he’d hoped for, he says, and some building requirements—like a seven-foot minimum ceiling height—seemed arbitrary and unnecessary.

“With regards to zoning, it becomes very apparent very quickly that there are a lot of things that are completely appropriate for building that concern a person’s safety,” he says. “But there are some things in there that make utterly no sense when it comes to building a tiny house.”

Hartel doesn’t live in his tiny home, instead using it to host UGA guests, students and interns. But he sees tiny building as a viable solution to Athens’ affordable housing problems.

“It’s absolute madness to be building these huge homes,” he says. “I mean, here’s what you see going on in Athens. You see one builder after another trying to outdo themselves in size.”

The city’s priority, he argues, should be allowing the construction of practical housing that residents can actually afford. It’s hard to argue with the $10 monthly electric bill for his tiny house.

“Yes, the commission needs to look at the rules and make it easier to build a tiny house,” he says. “Yes, it makes absolute sense from a standpoint of utilization of resources.”

Proponents of tiny living acknowledge that it’s not for everyone. Not everybody is willing to downsize when it means parting with many or most of their belongings, and even those who are may find that they value more privacy and solitude than a tiny home may provide.

“There’s not a place you can be in this house, other than the bathroom, where you won’t see the other person,” says Kernohan, who founded the statewide tiny-house group. He and his wife both work from home, and share their cabin with five cats. “So thank goodness we like to be around each other,” he says. “Because if you don’t, that can be a challenge.”

Still, there is a growing subset of people looking to give tiny living a try, and it all comes down to a question of priorities. “It’s just the mindset of folks, the way the economy has led us, just everything on a whole,” Kernohan says. “I think people in today’s world are a little bit more focused on quality of life, compared to quantity of life.”