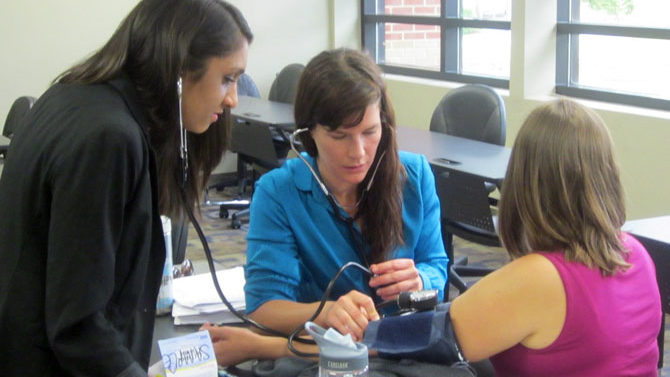 In his 1992 special “Jammin’ in New York,” George Carlin talks about how our efforts to “save the planet” can sometimes be more about feeling good about ourselves than actually helping.

“Save the planet!” Carlin says. “Are these people kidding? Save the planet? We don’t even know how to take care of ourselves. We haven’t learned how to care for one another!”
The fact that we’re not very good at taking care of each other becomes clear when a person who doesn’t have health insurance needs health care. It’s a familiar story: A health crisis can lead to thousands of dollars worth of medical bills for a person whose job probably doesn’t pay very well to begin with.

At best, uninsured patients might be able to convince the care provider to write off some of the cost as charity work. They still have to deal with an unwieldy bureaucratic system and a lot of additional financial stress and uncertainty.

Not everyone in Georgia is going to be helped by the Affordable Care Act, either—at least not anytime soon. The state is turning down federal funding to expand Medicaid. The employer mandate to provide insurance may be pushed back. Georgia’s individual exchange looks shaky at best and may not be affordable for everyone, even with subsidies.

This is where Health Assurance comes into play. Health Assurance is a new program of the Athens Health Network. It’s a safety net of discounted care for people who don’t have insurance. Participants wouldn’t need to wait until an emergency to see a health care provider. Or, a person who is already in the hospital and joins the Health Assurance program can get discounted rates. At that moment, the patient would be told exactly how much services are going to cost going forward.

Imagine being able to look at a menu of fixed costs. No surprises. Period. AHN would have contracts with area providers so that there is a set cost for their services for the uninsured. With this setup, patients without insurance wouldn’t get hit with a surprise cost at a time of crisis.

Enrollment in the program would cost between $20-$40 a month. After that, all the costs for health services would be clearly stated by the providers ahead of time and paid up front by the patient. For example, an annual checkup would always be the same price. So would a CT scan, a chiropractic appointment or a trip to the podiatrist. The prices for each health care provider would be freely available to patients before they even set foot in the office.

Uncertainty is what drives people away from seeking medical care, says Delene Porter, a board member of AHN and CEO of the Athens Area Community Foundation. “It takes the mystery out of going to the doctor,” she says. “I think a lot of people avoid going to the doctor because they’re afraid of how much it’s going to cost.”

Patients won’t be the only ones who benefit. Physicians and hospitals are drawn to this model because it cuts out the complications of dealing with an insurance company, says Allie Chambers, executive director of AHN. “They liken it to the old days of doing medicine where you dealt directly with the patient,” she says.

Chambers is now in the pivotal stage of recruiting providers to sign on with the program. She says that she also hears from them that the program would systematize a lot of the free care that they’re already giving. Knowing exactly how much everything is going to cost beforehand saves everyone the headaches they go through under the current system.

The Health Assurance program would be only the second one like it in the nation. To reverse the complicated mess of our healthcare system, it takes a lot of planning and cooperation from the community. AHN had its origins back in 2008 as the anti-poverty initiative OneAthens’ health team. Chambers started working on finding a solution for the uninsured residents in Athens as a master’s student working with this team. Her research led her to Access to Health Care in Reno, NV, which has been going for about six years now and became the prototype for Health Assurance.

Although Chambers is spearheading the effort in Athens, she’ll be the first to tell you it’s a group effort. So far, there are 27 members in the network, including representatives from Athens Regional Medical Center, St. Mary’s Health Care System, the Clarke County Health Department and several University of Georgia units, including the colleges of pharmacy, public health and journalism.

“Nobody has left the table,” she says.

It has taken a lot of people to get the program to the stage where it is now, but the community effort isn’t over. The journalism school has played a particularly big role in continuing to bring people on board. Pat Thomas, a UGA professor who teaches health reporting, has been closely involved with the effort and sent students out to Reno to study the model. Chambers says media attention from the trip has led to callers inquiring about the program.

While the timing is in their favor because health care is on people’s minds, Health Assurance just happens to be rolling out at the same time as the Affordable Care Act is starting to kick in, Porter says. “We were percolating ideas at the beginning stages of health care reform, and it looks like [without a single-payer system] it will still be very needed” she says. “These people were falling through the cracks, and unfortunately they’ll still be falling through the cracks. So this will be that safety net for them.”

AHN hopes to be signing people up for Health Assurance by late spring of 2014. It’s taken a lot of hard work for them to get this far, and it looks like it is still going to take a lot more.The program has caused many different groups in Athens to work together. Even George Carlin would be impressed.