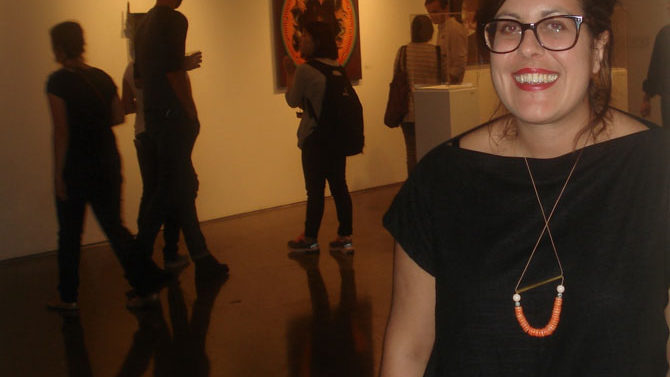 After mingling among some of the world most celebrated artists, collectors and art scholars, Katie Geha still has a contagious enthusiasm for the way art connects people on a basic communal level.

Before taking the job as gallery director of the Lamar Dodd School of Art, Geha was most recently in Austin, TX, but her experience in the art world extends far beyond liberal towns in conservative Southern states. She grew up in Ames, IA and studied art at the University of Iowa.

So she went to New York and got a job at the renowned Pollock-Krasner Foundation (as in Jackson Pollock and Lee Krasner). However, she knew she wasn’t ready to settle into a career yet. She went on to get her master’s degree in art history at the Art Institute of Chicago, after which she ended up working at the Ulrich Museum of Art in Wichita, KS, where she was responsible for traveling around the world, meeting artists and purchasing pieces to bring back to the museum. “It was an amazing job for a 25-year-old” she says.

That was before she got her PhD at UT-Austin, a town she says is similar to Athens. “Austin has such a, for lack of a better [term], DIY aesthetic,” Geha says. “If someone wants to do an art show, you do an art show… There’s this sense of, if we want to do it, let’s do it, and get it done… I feel like Athens might have that DIY aesthetic as well, and that appeals to me.”

At the opening for the Lamar Dodd faculty exhibition on Friday, Aug, 16th, professors and other members of the community sipped red wine and browsed through the faculty’s work. Geha sees this exhibit, which runs through Sept. 16th, as a great opportunity for students to come and connect with their professors as artists.

Having the professors connect with their students through their own work sets an example for how Geha hopes the students will use the space to connect with one another.

“I want to try to encourage students to propose shows to curate their own exhibitions,” she says. “They could propose their own work in an exhibition, or they could be like, ‘I want to pair my work with a friend of mine.’ I want people to feel like this is their building.”

Walking down the art school’s tall white hallways, she points to the walls and says, “Right now, it’s so white. It’s so kind of sterile. This is an art school! This should be a testing ground for all kinds of things. I don’t want this to be just like a sterile space.”

Geha also wants to connect the downtown to the school of art. “I think that’s one of the challenges at the Lamar Dodd,” she says. “How do we bring people that aren’t necessarily tied to the school, just because we aren’t located downtown? So I think that’s definitely something I have to be thinking about. How do we garner an audience over here? How do we make sure that people recognize that this is a place that is going to have very vital, cross-pollination type performances where we might have a dance performance at an opening. Or we might have an experimental sound performance. How can we try to create that integration with both the city and the university?”

She eventually hopes to strengthen Athens’ connections to the major centers of the art world, like New York and L.A., through an artist-in-residence program.

“We have a really, really strong program here of bringing in visiting artists to give lectures, which is awesome, and they bring in really top notch artists,” she says. “But why not use that a little bit more, and have them come and live in Athens for five weeks and create a project, and use [some of Lamar Dodd’s] space for their studio?”

Geha thinks bringing in top artists is a great opportunity, not only for students to learn from the artists, but also for the artists to learn about Athens. “I hope that what they find out is that the Lamar Dodd, the University of Georgia and Athens [are] a thriving arts community, and say, ‘This is such a cool place! You have to come visit.’“