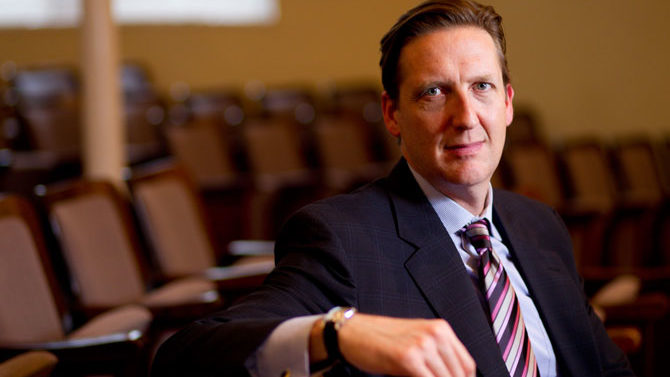 Hosting a television show was not something Alan Flurry ever imagined for himself. He’s a lot of things: a novelist, filmmaker, producer and the director of communications for Franklin College, but not a talk show host—until recently.

At his office in Old College, Flurry is sitting behind his desk with some of his films pulled up on his computer. As he works, he listens to a French radio station which, since he is a self-declared Francophile, he keeps playing to stay sharp on the language. Behind him is a wall of books on a range of topics, from biographies of Carl Jung and Albert Einstein to works of some of his favorite novelists: Tolstoy, Dostoevsky and Proust. Although his highbrow interests may seem to make him an unlikely candidate for a talk show, they’re acturally the key to the job.

Maybe that’s because it’s a different approach to TV. Flurry describes “Unscripted with Alan Flurry” as a way to share his conversations with experts visiting the University of Georgia in a format that gives them room to explain their ideas. “[It’s not] this dramatized, fragmented, super-intense newsy thing, but it’s actually informative,” Flurry says. “It’s long-form old media, and in a lot of ways [our culture is] past it. It’s not sarcastic. We’re not making fun of anything. We’re not breaking things. It’s not a reality show in that way.”

The idea for the show came together when Fred Newman, a UGA alumnus who performs the live sound effects for NPR’s “Prairie Home Companion,” was visiting the university for a week. Flurry was scheduled to interview him on behalf of Franklin College. When he went to Newman’s speech at the UGA chapel, he quickly saw that Newman’s showmanship, sound effects and outsized personality would be lost in a print interview. So he hired a film crew, not knowing how he would use the video. That ended up being the pilot that got him his own show on WUGA TV, the UGA-owned Georgia Public Broadcasting affiliate.

During the interview with Newman, Flurry discovered that visiting experts are anxious to talk about their fields to a broad audience. “I led him there, and I got out of the way,” he says.

This is the formula he continues to follow, but doing so requires a delicate balance of preparation and spontaneity. “I try to get 50 percent prepared, so that I can be prepared and have some potential questions to ask them, but it also allows for whatever’s going to happen to happen.”

Flurry’s ranging interests allow him to jump nimbly among differing fields. A few guests from past shows include Alan Garda, a legal expert on segregation in public schools; Barry Smith, a philosopher and neuroscientist; and poet and activist Anne Waldman. Since these guests are well known in their fields, they are also comfortable on camera. It’s a credit to Flurry’s scholarly dexterity that he’s able to educate himself in the weeks leading up to the interviews to talk to people from such far-flung fields.

The show’s producer, Melissa Jackson, says that it’s not the typical interview approach that you see. “It is not the usual commercialized, eight-second soundbites from a guest. It’s where you can really sit down and get an in-depth interview,” Jackson said. “Just about everyone we’ve interviewed says [to Alan], ‘Wow, you’ve really done your research.’ And this is a welcome change for a lot of these guests. They find it’s a luxury to really sit down and tell in-depth what they’re doing.”

But just because the conversation is elevated doesn’t mean viewers should be intimidated. “Everybody can take part in an elevated discussion,” Flurry insists. “It doesn’t have to be arcane or too technical… I mean it’s broad-cast. It’s by definition supposed to be broad.” He says a big part of striking the balance between informative and accessible is picking the right first question. “You have to pick some place that respects their expertise and is also conversational.”

So far, nine episodes have aired on WUGA-TV (Channel 6 on Charter and UGA cable) in the course of a year. There is no set schedule for the show, and they are aired whenever an episode is edited and completed. They are frequently re-aired on WUGA-TV after their initial run. Past episodes are also available on Youtube.

Flurry says there are plenty more in the can that haven’t been edited or aired. The upcoming episode will change the format slightly by including two 15-minute interviews in one episode, an experiment he says he’s open to trying again in the future. Whatever the final format, he’s looking forward to bringing some of UGA’s best campus visitors into people’s homes.