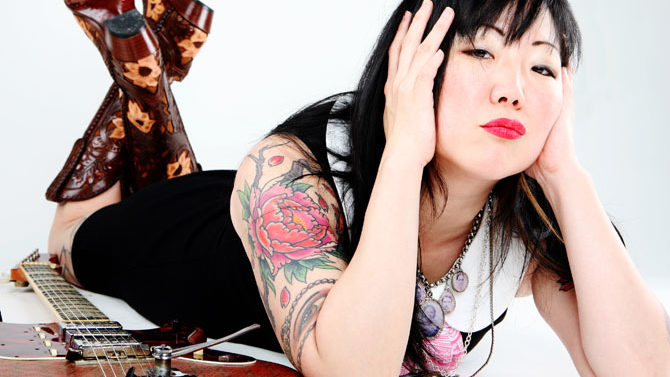 Although Margaret Cho hasn’t spent a lot of time in Athens, she feels a connection with the place because of her political views and, of course, the music. In advance of her four upcoming sets at The World Famous, the comedian and actress talked to Flagpole about what it’s like shooting a show in a conservative part of Georgia, her thoughts on same-sex marriage, her tattoos and her hope to star in another Asian-American family sitcom after her short-lived stint in one in the mid-90s.

Flagpole: Are you still living in Peachtree City?

FP: Have you gotten out to Athens at all?

MC: I haven’t been there for a number of years even though I’m so close. I haven’t been able to go because I get really busy. But I love so much stuff from Athens. I love the music. I love of Montreal, Neutral Milk Hotel. And of course I love R.E.M. and the B-52’s. And so, for music, it has a long tradition of bands I love, so it’s great to finally be able to go and do a show there. I have so many ideas about what I think that Athens is like in my mind, but I’ve only been there like three times. And its been a long, long, long time. I’ve been invited to of Montreal volleyball games [laughs]. I’ve been kind of invited into Athens life, but I’ve never actually been able to participate. That’s amazing in Georgia to have a place that’s so unique and so liberal. The bands are like some of the most profoundly outrageous and very modern in terms of sound. Even though it’s Georgia and the South, it’s almost like its own planet.

FP: Are you excited about the Supreme Court decision striking down The Defense of Marriage Act?

MC: Yes! But, I mean, what does that mean for Georgia? I love it, and I’m super excited, and I have a universal ministry card [so] that I can marry people. I’ve been deputized by California, the city hall in San Francisco, to marry people there, but I don’t know what that all means for gay marriage in Georgia. Is it now legal in Georgia? Or is it going to be? What’s going to happen?

FP: Yeah, I don’t think anything’s going to happen yet. But I was going to ask you about your license to [marry people]. Are you planning to go to California to marry anyone anytime soon?

MC: Yes, and also in New York and also hopefully in France. I can do it anywhere in the world. I’ve been asked to do a lot, but I’ve just been working so I haven’t gotten a chance to step out and do that, but I really love doing that. So, that’s something that will be happening later this year, and hopefully I will be doing it somewhere in Athens [or] in Georgia somewhere. I’m legally equipped, I just don’t know what it means state-to-state.

FP: So, this interview is going to be printed in Flagpole’s fashion issue. I wanted to ask you about your tattoos. Tattoos are kind of a recent thing for you, right? Like in the last decade?

MC: Yeah, well, I started getting them like 12 years ago. But I always thought I would get them, because I grew up around people who were getting them. I grew up around [tattoo artist] Ed Hardy as a child. My father would sell his books at the bookstore. So my family had a relationship with Ed Hardy for many years.  And all the people that he was tattooing, I really kind of grew up with. I love tattoos, I have about 150, but they really are pretty hidden, so you don’t really see them much. I don’t show a lot of skin anyway. They’re all kind of under my clothes. You can’t really show them when you’re an actor, so in a way they’re a bit of a mystery, but I really love them.

FP: How does that process work? Does it just come to you, [the tattoos] you want to do next?

MC: No, I don’t actually have any choice. I basically have all these friends of mine that are tattoo artists whom I’m really close with. They decide, “OK, you’re going to get this there, and this is going to happen there.” And I trust them. I don’t actually decide on the images.

I’m getting a crew tattoo with Damien Echols, who was one of the West Memphis Three, whom I helped get released from prison last year. He and the guys from Sacred Tattoo in New York were all getting a crew tattoo so I don’t know where to put it. So I’m going to get the same thing that Damien designed. That’s sort of a thing in tattooing. If you have a crew, like a bunch of your friends, you all get the same tattoo. So I need to find some space [on my body].

FP: You’ve become a star and TV has changed a lot since [your 1994 ABC sitcom “All-American Girl”]. Have you ever thought about doing another show?

MC: Yes! I’ve been wanting to do it forever! It’s something that I think really needs to happen. I want to do another Asian-American family show. I want to do a show where I could write it and star in it and really show what I think of this idea of Asian-American identity. So, yes. I’ve been trying to do that for a number of years. I think that would be great and I would love to see that happen.

FP: Who are some of your [standup] heroes?

MC: I opened for Bill Hicks. I opened for Jerry Seinfeld. I opened for Paula Poundstone, who’s a massive hero. And then there’s people who are in comedy and people who are in music also, in my mind [who] are sort of both. Like Billy Bragg, who’s very political but also very funny too. I’m also a member of Wilco [laughs]. I’m going to do their festival soon, and I’m going to be a one woman tribute band: Wil-Cho. I play all right enough, but I have to learn 65 songs. Yeah, I love that band, so that’s my crowning achievement at this moment—that I finally got to join.

WHERE: The World Famous