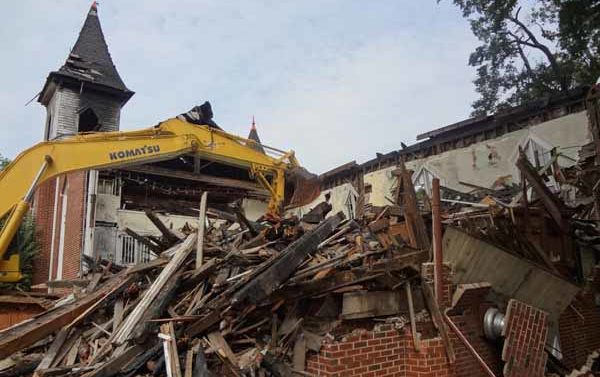 Workers starting tearing down the shell of Oconee Street United Methodist Church (which burned down in April) today in preparation for building a new church on the same spot.

The church was a total loss. When asked whether any of the structure could be salvaged, rebuilding committee chairwoman Maxine Easom said, “We’re saving some of the bricks, but pretty much no. It’s all burned up.”

Demolition will take two or three days, Easom said, but I’m not certain when construction will start. Joe Dennis, the church’s PR coordinator, said it “will begin in the next few weeks” and take 18 months. Easom, however, said it will take four months to finish designing it, then a year for construction. The new church will have the same footprint as the old one, she said.

Since the fire, Oconee Street UMC members have been worshiping at Tuckston UMC on the Eastside after a brief stint at the smaller Young Harris on Prince Avenue.

When the new church is completed, Action Ministries, the nonprofit that runs Our Daily Bread, won’t be returning. The soup kitchen has been operating out of First Baptist Church downtown, where it has more space, and members voted Sunday to let it stay permanently, Easom said.

Watch the Album Trailer for Shonna Tucker’s A Tell All