UGA Wants to Get Rid of Its Coal-fired Boiler 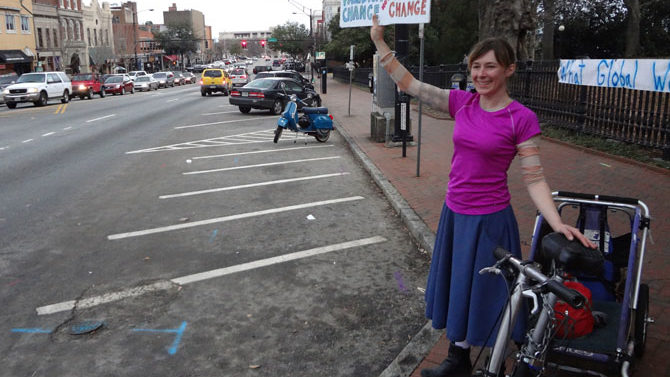 University of Georgia administrators hope to say bye-bye to the last remaining coal-powered steam boiler on campus, but they can’t yet say when that will be.

UGA asked engineering firms to submit ideas by Apr. 1 to explore the options. They’ll interview three or four firms this spring, and then one firm will create a final feasibility plan that will evaluate possible replacements—along with pricing—by Oct. 1.

“We want enough of a study to give recommendations about what we can do to replace the coal boiler,” says David Spradley, UGA’s assistant director of energy services. “We’d also like to evaluate whether it makes economic sense to generate electricity of our own on campus.”

The final decision will come down to economics and reliability, Spradley says. Some northern universities that generate electricity were able to keep their campuses going during Hurricane Sandy, which is an attractive idea. “But we’d never be able to generate all of our own power here,” he adds. “No way. We’re too big.” 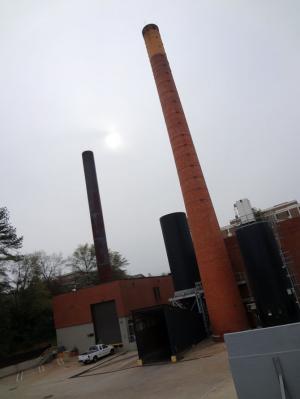 A coal-fired boiler at UGA’s physical plant is the largest single source of pollution on campus. Officials hope to phase it out in the next few years.

For now, the focus is on the the coal boiler, which is nearing its 50th birthday and ready to retire. The boiler runs about four months per year, mostly during the winter. Three natural gas boilers, which pollute less than coal, carry the load for most of the year, and UGA officials want a new backup source of energy.

“We don’t have a time frame for this, so it could be five to seven years down the road depending on the economy and state budget cuts,” Spradley says. “But the key is that when the time is right and we can advance, we don’t have to take two years to evaluate where we are and what would work best.”

This is a step in the right direction, say a group of students who have campaigned against the university’s use of coal for years. “The language used in the proposal certainly sounds like coal won’t be an option, and that’s exactly what we wanted,” says Laura Toulme, an executive board member for Beyond Coal.

The group drafted a letter to UGA administrators to thank them for taking the step and to ask officials to make a more public announcement about the bid. “We hope they’ll acknowledge that they don’t want coal and that at some point soon they’ll retire the boiler,” Toulme says.

The Beyond Coal campaign will continue on-campus petitioning for their initiatives, especially for student representation in the final decision-making process. “Students frequently play a role in committee searches for positions, so it’s not an unreasonable request to have direct involvement with what happens on campus,” Toulme says.

The students also want to push for a final date to retire the boiler. The group is hosting a movie screening at the Tate Theater on Apr. 15 to discuss coal mining and hold another petition drive with campus climate groups. “It’s important to keep this process accountable,” she says. “It’s time-sensitive, and we don’t want the ball to be dropped on this.”

“Many options out there would be very sustainable, but the scale of the technology hasn’t developed to the point where it can be implemented for our size,” Johnson adds. “We can’t afford to be experimental in what we’re doing.

“This is a significant investment in the future of the university,” he says. “What we have in place now has been there for decades, and we envision the next technology will be there for a minimum of 25 to 30 years.”

The university’s central steam plant produces saturated steam for the campus that is used as hot water in dorms and offices and for sterilization, cooking and research purposes. Lab researchers rely on consistent hot water to conduct experiments and to care for animals and plants housed on campus. Because of this, reliability is a main concern, Spradley says.

A study released in August by North Carolina State University for the U.S. Department of Energy’s Southeast Clean Energy Application Center looked at UGA’s steam plant and new heat and power scenarios. It identifies several possible replacements, including biomass created from wood left over after timber harvests. It notes that two particular natural gas technologies were “the best financial and environmental, especially in the form of carbon dioxide reductions for campus.”

That study provides an “airplane view” of the situation, Spradley says. The new study will be more precise with equipment requirements, energy efficiency and pricing.

University planners want the new technology to be efficient when electricity costs are at their highest—during the sweltering summer months in Georgia. For example, by turning steam into chilled water, they can better cool campus buildings on hot days, Spradley says.

“Anything you burn will generate carbon dioxide, including natural gas, so if we can be more efficient, we can reduce our carbon footprint,” he says.

Students involved with the Beyond Coal campaign say that natural gas isn’t the ideal option, but it’s probably the most realistic. Biomass, which isn’t dense, would require toting truckloads of supplies to the central location on campus to generate enough power.

“Natural gas has the negative associations with fracking, so the ideal [solution] would include solar thermal and other energy efficient upgrades,” Toulme says. “But we realize that would involve the decentralization of the steam plant, which isn’t going to happen.”

In addition, solar thermal technologies aren’t usually hot enough to sanitize labs and research areas, she adds. Though some campus buildings use solar panels, such as the one on Jackson Street, the panels only create about 3 percent of the power used in the building, Spradley says.

“This is the opportunity for the university to be innovative and cutting edge,” says Sara Black, a junior involved with Beyond Coal and other campus climate initiatives who was recently named a Udall Scholar, a top honor for environmental policy students. “About 20 other universities in the past five years have moved beyond coal and tried new technologies, and we can join them.”

Changing over the coal boiler is one part of the university’s plan to reduce emissions by 20 percent by year 2020. The boiler released one ton of the 1.59 tons of pollution produced by UGA in the year prior to Jan. 25, according to Michael Odom, air toxics manager for the Georgia Environmental Protection Division. Those figures include 0.893 tons of hydrogen chloride, a highly corrosive gas that contributes to acid rain.

UGA’s Georgia Climate and Society Initiative and the Office of Sustainability are creating a sustainability strategic plan for the campus, which is scheduled for completion in November. The plan will outline ways the campus can become more carbon-neutral, such as monitoring energy use in buildings, buying more locally grown food and tracking student and faculty travel.

“Purchased electricity makes the largest contribution to UGA’s harmful emissions, so one aspect is to be mindful of the electricity we’re using,” says Kevin Kirsche, director of the Office of Sustainability. “Like our parents say, turn off the lights, shut down your computer and unplug the things you’re not using, such as phone chargers.”

The UGA Campus Master Plan already features some sustainability goals, but the new plan will include extensive details. For example, the university’s buildings now use about 13 percent less energy per square foot than they averaged in 2007, but because UGA has grown in that time, the university’s overall energy use is still growing slightly.

“This is an opportunity to infuse more fun in our lives,” Kirsche says. “I know I’m much happier when I ride my bike to work rather than drive.”

UGA’s 2020 Strategic Plan already states, “A priority for the university at large is to design and construct buildings, plaza spaces, hardscapes and other landscapes that embody the latest in environmental advances and to incorporate the increasing social nature of learning today by creating ample spaces for people to interact.”

The Student Government Association’s environmental affairs committee, which includes students from the Beyond Coal campaign and other campus groups, wants to hold administrators to the plan. The committee is already promoting renewable energy in the new Terry College of Business, which will begin construction on North Lumpkin Street in upcoming years.

In addition, the Real Food UGA group is pushing for the dining halls to redirect 20 percent of its purchasing power to local foods within 250 miles of campus. Students are combing through the $10 million annual budget and categorizing the food products to find organic, local and free-range options.

“I think there’s a misconception that students don’t care where their food or steam comes from, so if it’s not broken, then why fix it?” says Black, a Real Food leader. “But students do care, and when we hold petitions on campus, about 90 percent will stop and agree. The dining halls are already great, and I think students would celebrate them if we pushed the bar even more.”

This requires teamwork with students, faculty and staff alike on campus, Kirsche says. About 20 people met in early March to discuss ways to reduce the university’s carbon footprint and what to include in the 2020 plan.

“Emissions reduction shouldn’t be a politically charged discussion,” Kirsche says. “This is about quality of life, improved health and better environmental quality, but it’s often quickly and unnecessarily political.”