Can Georgia Afford to Expand Medicaid—or Afford Not to? 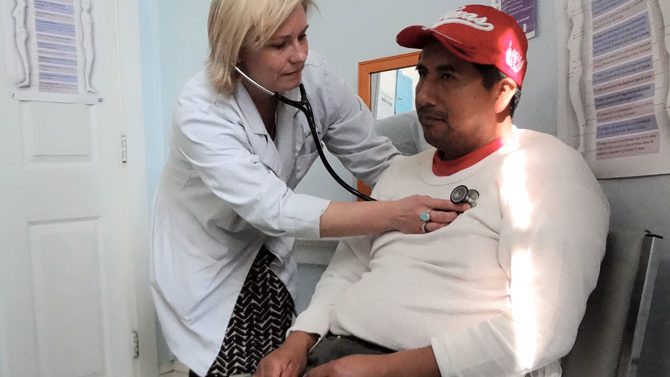 When Tess Jones thinks about Medicaid in relation to herself and the state and federal governments, it becomes a complex question.

Jones, 47, is an Athens resident who visited the Athens Nurses Clinic for the first time recently to ask about an abscessed tooth. Currently unemployed, Jones’ story is echoed by many who have faced financial disaster after financial disaster in the past few years—job changes, car problems and unexpected medical dilemmas.

“I never thought I would be in a job without insurance and then unemployed,” she says. “It’ll knock you off your horse.”

Jones, still on the search for a job, hadn’t yet applied for Medicaid, but she’d likely become eligible if Georgia expanded the program under the Affordable Care Act. As the law moves into place and takes effect by 2014, states can draw down more federal dollars to extend the program to more residents.

“I’m sure it would be helpful, but I also don’t want us to be crazy with the state’s finances,” Jones says. “Even if it benefits me, I want to see it handled right.”

Jones may fall in the middle, but Georgia politicians are divided—Democrats, in the minority, want to take advantage of the opportunity, while the majority GOP is opposed.

“I want to do everything I can to be strong and stable. I think the state should do the same,” Jones says. “Balance is critical and key.” 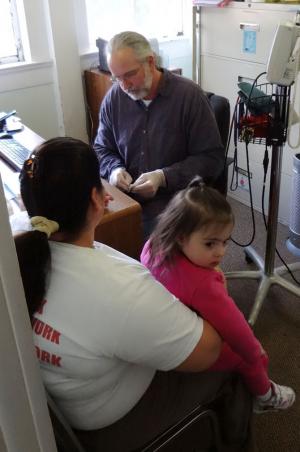 Mark Smith, an EMT and musician, volunteers handling intake at the Athens Nurses Clinic, where many patients are indigent.

Since his State of the State speech in January, Gov. Nathan Deal has held firm in his rationale against expanding Medicaid in Georgia, saying it will cost too much. Other conservative-leaning states, such as Florida, Arizona and Ohio, have decided to take the money, while Texas and Wisconsin remain opposed.

Medicaid currently covers approximately 1.7 million Georgians, an increase of 20 percent since the economy cratered in 2008, according to the Georgia Department of Community Health. In addition, about 27 percent of adults between 18 to 64 went without health coverage in Georgia in 2011, according to Census data released in September.

If passed, the expansion would cover adults who earn wages up to 133 percent of the federal poverty level—about $15,000 for an individual or about $26,000 for a family of three.

The number of Georgians eligible for Medicaid would grow by 100,000 in 2014 and by 500,000 more in the following years, according to the Kaiser Commission on Medicaid and the Uninsured report released in November.

That could mean about $35 billion in federal dollars for Georgia in the next decade, with 100 percent of the expansion paid by federal funds for the first three years and about 90 percent  after that. The governor’s office estimates the expansion would cost Georgia $4.5 billion over 10 years.

In January, Deal and the Georgia General Assembly extended a three-year-old hospital provider fee—often called the bed tax—to fill a Medicaid hole of about $500 million, but Deal is showing no signs of joining other Republican governors who’ve opted to accept more money for Medicaid, even though they opposed the Affordable Care Act.

“We haven’t moved on the issue. We can’t afford Medicaid expansion,” says Brian Robinson, Deal’s deputy chief of staff for communications. “We’re seeing some Republican governors in other states accede to this, but for the most part, those are states with a lower percentage of Medicaid patients.”

When the state’s share kicks in three years from now, it’ll be overwhelming, Robinson says.

“We can’t afford what we have now, much less another $4.5 billion,” he says. “That’s simply money that’s not in our hands. We can’t spend what we don’t have.”

Deal and others are afraid that the state’s share will increase exponentially as the Affordable Care Act brings in complications that the federal government didn’t anticipate. Deal has suggested a block-grant approach, which would limit federal funding to a lump sum but come with fewer restrictions on how states must operate the program.

Even without the expansion, the governor’s budget recommendations don’t include enough funding to cover Georgia’s health care needs, according to Timothy Sweeney, director of health policy at the fiscally liberal Georgia Budget and Policy Institute.

From June 2008 to July 2012, the number of Georgians served by Medicaid increased by nearly 300,000, he says. “Medicaid is designed to serve more people when the need is at its greatest: during times of economic trouble.”

More than 60 medical provider and consumer advocacy groups have formed a group called Cover Georgia, which seeks to promote Medicaid expansion in Georgia. Expansion ‘‘is the No. 1 priority’’ for several of the organizations, says Kathy Floyd, legislative director of AARP Georgia, a member of the coalition.

“We’re already paying for these 600,000 Georgians to have access to health care,” says state Rep. Spencer Frye (D-Athens). “They go to the emergency room for care, which is exponentially more expensive. Instead of saying we can’t afford this, how can we not afford this?”

An estimated 70,000 new jobs would be gained if Deal approved expansion, according to a recent report from Georgia State University’s Bill Custer. The study, commissioned and released by the Healthcare Georgia Foundation, says expansion would produce an economic impact statewide of $8 billion annually.

“As a state, we need to invest into our human capital through health care and education,” Frye says. “If we can increase our reputation as having healthy and educated citizens, we’ll have the reputation as a place to come do business. Plus, if someone offered you $33 for your $3 investment, you’d do it all day long.”

Physicians and clinicians are asking the same questions as Jones, the patient at the nurse’s clinic: What is reasonable? What is effective?

Robinson contends that expanding Medicaid won’t benefit health care workers. “Ask hospitals and doctors and dentists if what they receive back in reimbursement even covers their pulse. It doesn’t,” he says. “It’s forcing industry to provide a service below cost, which will create a market balloon effect and cause those on private insurance to pay that much more.”

In October, more than 200 providers attending the Medical Association of Georgia’s annual meeting drafted the group’s official stance on expanding Medicaid, and after hours of debate, they came down “neither firmly for nor against expansion,” executive director Donald Palmisano, Jr. says.

“The expansion question is frustrating in several ways,” says Paige Cummings, director of the Athens Nurses Clinic. “Medicaid simply doesn’t pay enough, and some patients aren’t able to be seen.”

In Athens, there aren’t enough physicians to absorb the expansion, Cummings says. Many offices are willing to process less Medicaid paperwork, and for the most part, the Athens Neighborhood Health Center is the only place Medicaid patients in Athens can find care. Even then, the patients are referred outside of the county for specialty care.

At the Athens Nurses Clinic, expanded Medicaid would cover 80 percent of patients. About 15 percent have incomes that fall between the 133 to 250 percent of the federal income level and would buy insurance on the private market through exchanges set up by the Affordable Care Act. The final 5 percent are undocumented residents.

“Doctors are already turning patients away, and many say they only get back half of what they spend,” Cummings says. “Add to that the fact that it sometimes takes six months to get reimbursed.”

Cummings is also worried about existing funds for their services, especially the hospitals’ Indigent Care Trust Fund. “We’re afraid that with the health care reform, less federal money will go into that pot,” she says. “Millions of dollars won’t be billed to Medicaid because it’s no longer the law of the land in Georgia.”

As physicians and politicians continue to attack the question, a group of Athens health care providers are trying to make a difference. Athens Health Network, which grew out of the OneAthens health committee formed under Partners for a Prosperous Athens, is developing a “health assurance program,” which will give primary care coverage at a reduced price.

Modeled after a system developed in Reno, NV, the program will help working residents to access care. About 5,000 people in Athens went without insurance in 2010.

“This is for our small businesses and nonprofits that don’t have a large enough risk pool for insurance, our part-time artistic workers, our students whose parents don’t have insurance, and others,” says Allie Chambers, director of the network who developed the model as part of her master’s capstone in the University of Georgia’s College of Public Health.

Under the model, an individual will pay a low monthly fee to enroll in the network and then pay reduced prices to primary care providers and specialists during appointments. For doctors who won’t accept Medicaid, cash in hand is more attractive than paperwork, Chambers notes.

Chambers and others are now submitting grant requests, gathering donations and developing the provider pool, which they hope to have in place by the end of the year. The network is developing focus groups now and will send out a community survey soon to gauge how many Athens residents would sign up, how much they would be willing to pay for services and which services are needed.

“This is for people who are able to pay something, so it’s not an answer for all,” Chambers says. “But it could really help, and we’ve thought it out with the help of Nevada’s successful program leaders.”

Cost of spending to the state: $4.5 billion over 10 years