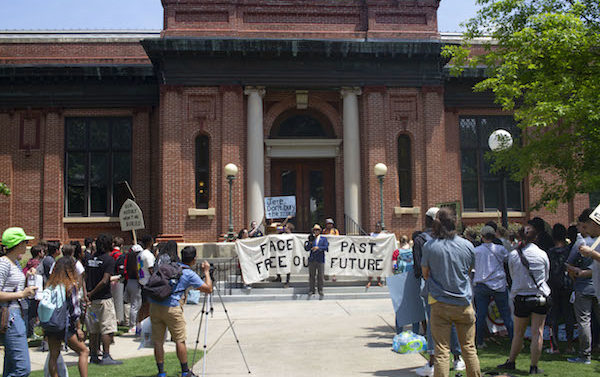 University of Georgia police told protesters they couldn’t enter the Administrative Building at 3 p.m. on Thursday, stating it was not a venue for “engaging in expressive activity,” according to a video of the incident. The building is open until 5 p.m. on weekdays.

After a picnic on North Campus, a small group tried to enter the building to seek a meeting with President Jere Morehead about the how the university has handled slave remains found underneath Baldwin Hall and the legacy of slavery in general. Joe Lavine, a recent UGA graduate who directed the documentary Below Baldwin, captured the confrontation.

According to another video of the incident, shot by Evan Johnson, UGA police physically moved two students, Imani Scott-Blackwell and Zaria Hampton, away from the door in an effort to close and lock it. Then, UGA Police Chief Dan Silk threatened to arrest them for obstruction.

During a protest on Monday, UGA police allowed six people to enter the building at a time. At the end of day, five protestors and a legal observer were threatened to be arrested for criminal trespassing for being in the building past 5 p.m.

The group returned on Thursday after being told by the Office of the President that it would take two to three days to receive a response from Morehead and a representative of the Georgia Board of Regents.