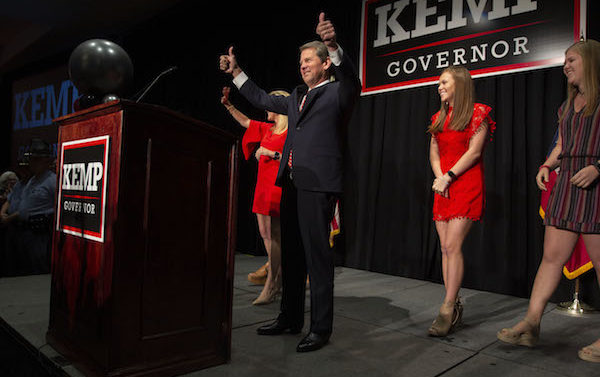 A former candidate for an Athens-area congressional seat was one of five voters who filed a lawsuit Tuesday seeking to force Brian Kemp—the apparent winner in what is still a disputed gubernatorial race—to recuse himself from overseeing Georgia’s election.

Just before a hearing was set to begin this morning in Atlanta, Kemp announced his intention to resign as secretary of state at noon today, rendering the lawsuit moot.

One of the plaintiffs was Barrow County resident Chalis Montgomery, who ran in the 10th Congressional District Democratic primary last spring. Tabitha Johnson-Green of Sandersville won the nomination and lost to Rep. Jody Hice on Tuesday.

“It’s really important when we have suits like this to show a variety of plaintiffs and a multiplicity of concerns,” Montgomery said. “Even though I’m not running for office right now, it’s important to stand up against our democratic norms. We don’t have anything if we don’t have free and fair elections.”

Protect Democracy says Kemp resigned in response to the lawsuit. However, Kemp says he stepped down to focus on transitioning into the governor’s office. He currently holds a slim lead over Stacey Abrams with some provisional ballots left to count, though likely not enough to force a runoff, but Abrams has said she won’t concede until every vote is counted.

“Unfortunately, Mr. Kemp saw the writing on the wall and elected to save face and declare he was resigning to prepare for the governorship,” Montgomery said. She added that the case was “clear cut” and “narrowly tailored,” which could have contributed to Kemp’s decision to step down.

Rather than proceeding with the case, the judge dismissed it due to Kemp’s resignation, Montgomery said.

The lawsuit, Brown vs. Kemp, argued that Kemp could not “fairly administer” the state’s election while running as a gubernatorial candidate. The suit added his role in the election as Georgia’s Secretary of State “violates a basic notion of fairness—that a man should not be a judge in his own matter.”

In addition, the lawsuit accused Kemp of using his office for political advantage, which “violated the constitutional rights of plaintiffs and other Georgia voters.”

Kemp’s resignation was “a huge victory for democracy and the rule of law. It is a basic constitutional principle that a person may not be a judge in their own case and that’s what Brian Kemp was attempting to be here. It was manifestly unfair and it is a credit to the voters who stepped forward… whose bold stand in defense of democracy forced Secretary Kemp’s hand,” said Larry Schwartztol, counsel for Protect Democracy, according to the press release.

The release went on to cite the “exact match” policy and the incident this weekend in which Kemp accused the Democratic Party for hacking the elections—without evidence—and began a state investigation.

The suit also claimed that the secretary of state’s office did nothing to fix cybersecurity weaknesses, citing two incidents where six million Georgia voter records were exposed. Kemp later claimed the incident was a “clerical error.”

“If any other country were to hold elections in the manner we did in Georgia this year, we would refuse to recognize the results. That’s our bottom line,” Montgomery said. “If Kemp was fairly elected, I would be happy to call him our ‘governor-elect,’ but as of now, votes still need to be counted and adjudicated.”

Moving forward, Protect Democracy said votes must be “counted fairly and any other irregularities caused by Secretary Kemp’s conflicted role and multiple egregiously unethical and unlawful acts in the management of this election be addressed to the degree that Georgia voters can have full confidence in the result,” according to the press release.

Gov. Nathan Deal appointed Robyn Crittendon, head of the Department of Human Services, to serve out the last two months of Kemp’s term. A Dec. 4 runoff between Democrat John Barrow of Athens and Republican Brad Raffensperger will determine her replacement come January.

Get to Know: Emily Olson

Lessons Learned About the Dawgs So Far This Season