Lessons Learned About the Dawgs So Far This Season 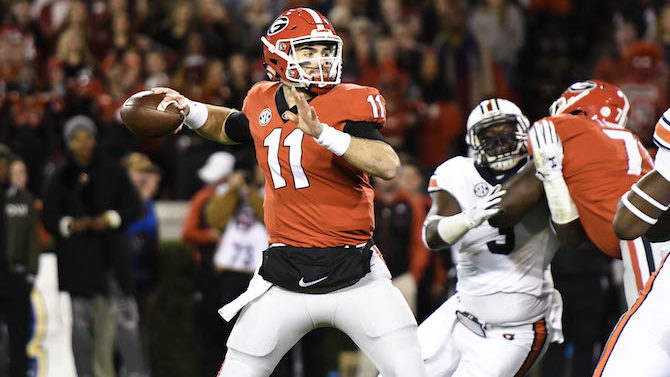 Another SEC game, another underwhelming performance, another victory for Georgia.

The Dawgs beat Auburn 27-10 Saturday night at Sanford Stadium to close out their regular-season SEC slate and finish 7-1 in-conference. But despite the 17-point margin of victory and domination in nearly all major statistical categories, plenty of Georgia’s flaws and weaknesses were on display, much like most of the SEC games the Dawgs have played this season.

While we can and should be happy about their sterling SEC record, it isn’t time for a celebration just yet. For now, everything from this season must be viewed through the lens of what’s still to come. And what’s still to come is a showdown with a seemingly unbeatable Alabama team in the SEC Championship Game.

So while reflecting on the successes from this season and laughing at all the SEC programs swimming in our wake would be a hoot, it will have to wait until the offseason. Instead, we must look back on those eight SEC games and from them glean lessons learned and unlearned.

South Carolina: The Dawgs traveled to Columbia and beat USC East 41-17 in a game Gamecock fans spent an entire offseason convincing themselves they would win on their way to a shocking run to the SEC East title. Now they’re 5-4. The Dawgs led 20-10 at halftime but blew the doors off in the third quarter.

Missouri: Georgia defeated Missouri 43-29, but the 14-point margin of victory didn’t do the Tigers justice. Or, perhaps, it did the Dawgs too much justice. UGA committed seven penalties for 66 yards and almost lost a touchdown on what should’ve been called a goal-line fumble, the second such play through the first four games of the season.

Tennessee: Georgia ultimately beat Tennessee 38-12, but it could have been much closer. Isaac Nauta returned a first-quarter fumble 31 yards for a touchdown, and Rodrigo Blankenship converted an extra point after stopping and resetting during the play.

Lesson Learned: Luck is on our side—at least occasionally.

Vanderbilt: It was an easy 41-13 victory over the ‘Dores, but Georgia did face some losses, as Ben Cleveland and Solomon Kindley left this game injured. It was the beginning of significant injury issues along the offensive line that continue to persist. Luckily, there have been plenty of underclassmen ready and able to pick up the slack.

Lesson Learned: You must be deep along the offensive line to survive in the SEC.

LSU: In the only loss of the season, LSU beat Georgia 36-16 in Baton Rouge. The biggest issue in this game was terrible coaching from Smart and his staff, but Jake Fromm did them no favors with his play, going 16-34 for 204 yards, one touchdown and two interceptions. He’s improved significantly in the games since, and—shocker—so have the Dawgs.

Lesson Learned: When Fromm has a bad game, so does Georgia.

Florida: There were plenty of moments when the final result was in question, but Georgia was able to win the biggest World’s Largest Outdoor Cocktail Party in decades 36-17. And we could have scored more if we weren’t stopped on the goal line SIX TIMES on a single drive.

Lesson Learned: We are atrocious in short-yardage situations, and that may be our downfall.

Kentucky: In an unexpectedly huge game, Georgia defeated Kentucky 34-17 in Lexington to clinch the SEC East. D’Andre Swift had his best game of the season up to that point, rushing for 156 yards and two touchdowns. However, that performance was eclipsed against Auburn, as Swift ran for 186 yards and a touchdown plus 43 yards receiving against the Tigers.

Auburn: The Dawgs beat Auburn 27-10 but that score could have been much more lopsided. Georgia left three touchdowns on the field, getting within five yards of the end zone on three occasions and settling for field goals—or a failed fake field goal—each time.