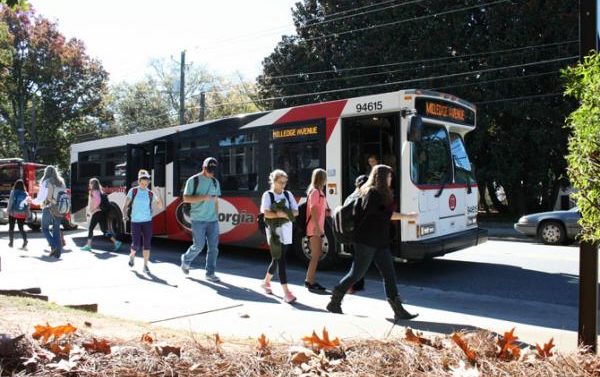 A University of Georgia bus hit a female student on the East Campus Express route this morning. Witnesses said the student was walking across the crosswalk between Grady College of Journalism and Mass Communication building and the back of the university bookstore.

William Peebles, a freshman animal science major, said he was on the bus that hit the woman.

“The bus driver made that right turn right there going up to North Campus and hit her,” Peebles said. “I don’t think she was hit hard enough to fall or anything, but I heard the bus driver make a kind of shocked noise when she made that turn.”

The student did not appear to be severely injured. Peebles said he noticed her holding her hand after the bus hit her.

Greg Trevor, the executive director of media communication, confirmed the incident occurred but did not release further details.

“The driver has been sent home pending the completion of a review of the incident,” Trevor said.

Get to Know: Niki Neiconi