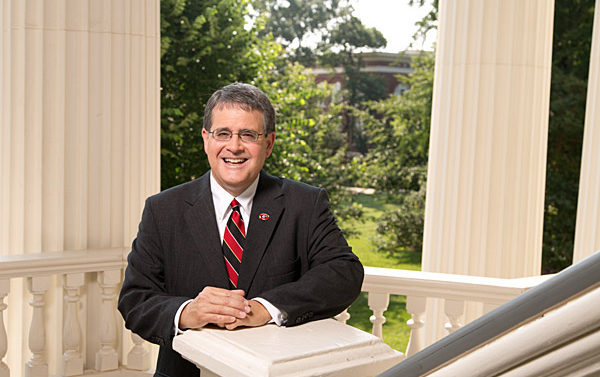 Diversity and inclusion in the student body and various academic disciplines and research initiatives will be the University of Georgia’s priorities, UGA President Jere Morehead said Wednesday during his annual State of the University address.

Of all the achievements and awards the university has earned over the past year, receiving the INSIGHT Into Diversity Higher Education Excellence in Diversity Award exemplified that “diversity and inclusion are core values of this university,” Morehead said. “We will continue to provide support and resources here to become even more connected.”

In order to help recruit students from different financial backgrounds, Morehead introduced the Georgia Commitment Scholarship Program, a scholarship matching program that would generate 400–600 new need-based scholarships. Any gifts in the amount of $50,000, $75,000 or $100,000 will be matched by the UGA Foundation. As these endowments grow, so will the size of the scholarship award.

The Robert W. Woodruff Foundation made the initial donation of $30 million, the largest in UGA history, according to Morehead.

The scholarship program will “ensure academically qualified students have access to UGA regardless of their financial background,” Morehead said. One in four UGA students receives a Pell Grant to assist them in affording their college education, he said, and one in three of those students comes from a family who is unable to provide any significant financial assistance.

Yet according to The Equality of Opportunity—a massive study on college students’ families’ financial backgrounds—the average UGA student comes from a family with a median income of $127,000, second-highest in the SEC. Forty percent of UGA students come from the top 10 percent of wage earners, while just 11 percent come from the bottom 40 percent.

By providing additional financial resources, UGA will preserve its “commitment to a vibrant and diverse campus” and avoid driving students to competing institutions that have more scholarships to award, Morehead said.

Diversity among academic disciplines and research fields is what Morehead said will lead to the university “solving the grand challenges of our time,” another of the priorities introduced. Through a new interdisciplinary seed grant program, grants will be awarded to the winning groups of multidisciplinary researchers who endeavor to solve issues facing the world today, “problems that transcend a single discipline,” Morehead said.

By partnering with the U.S. Department of Commerce’s National Institute for Innovation in Manufacturing Biopharmaceuticals, UGA will participate in interdisciplinary work to develop, manufacture and test new live-saving treatments, like stem cell therapy, with the aim of getting them where they are needed in an “efficient, scalable, safe” manner, he said.

As the qualifications of students involved in UGA’s various fields of study has risen, it has been over a decade since the university last evaluated the rigor and relevance of those programs. The new President’s Task Force on Student Learning and Success, co-chaired by Vice President for Instruction Rahul Shrivastav and Vice President for Student Affairs Victor Wilson, will assess curriculum to make certain that UGA’s classrooms are keeping up with the student body, Morehead said. The task force will also ensure core curriculum and programs are relevant to today’s world “so graduates are prepared for the outside world” in terms of service and leadership, he said. The task force will complete its evaluation by Dec. 1.

The Fish Shack to Open on West Broad in February