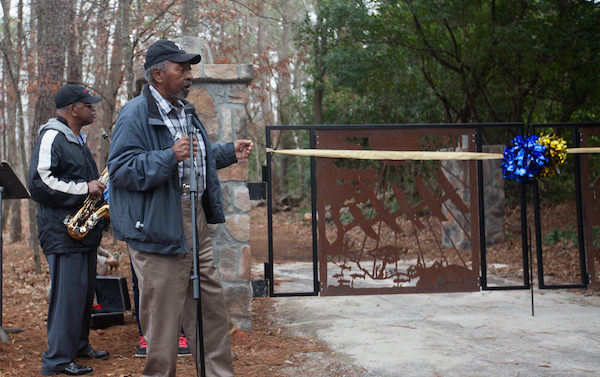 Local artist Harold Rittenberry speaks at the dedication for a gate he designed at Brooklyn Cemetery.

To honor the over 660 volunteers who have worked to restore the cemetery since the restoration project began in 2006, the Friends of Brooklyn Cemetery—along with volunteers, county commissioners, representatives from the University of Georgia and the Athens-Clarke Heritage Foundation—gathered to receive an official proclamation from UGA President Jere Morehead. The proclamation recognizes the efforts of volunteers and stated a “deep and abiding appreciation” for those who have worked to preserve rich cultural significance of the cemetery.

The celebration also officially dedicated an entrance gate designed by Rittenberry. The metal sculpture depicts several different images, including birds which Rittenberry says are like “messengers telling a story,” and someone sitting under a tree reading a book, which signifies the tree of knowledge and “sending up what we learn” to the birds.

“I didn’t need much inspiration, because this used to be my playground,” Rittenberry said. “Today it’s just a ghost of its former appearance.”

Since the project began in 2006, dead trees have been removed, pathways have been cleared of brush for visitors and graves have been uncovered and cleaned up, allowing previously unidentified graves to be marked and tagged.

The restorative work at the cemetery has been done 100 percent by volunteers, said project director Linda Davis. Donations to the cemetery is what allowed them to pay artisans for projects such as the new gate and the stone pillars on either side.

“It has truly become a labor of love,” Davis said, whose own grandparents are buried in the cemetery but graves remain unmarked. “This project is the wind beneath my wings. They deserve a better resting place.”

The preservation of tucked-away cemeteries like Brooklyn and modest mill houses around Athens are just as important as preserving the downtown area and the Taylor-Grady House, said Amy Kissane, executive director of ACHF.

Athens-Clarke County Commissioner Melissa Link also spoke to the importance of transforming the cemetery: “You can’t really know where you’re going until you know where you’ve been.”