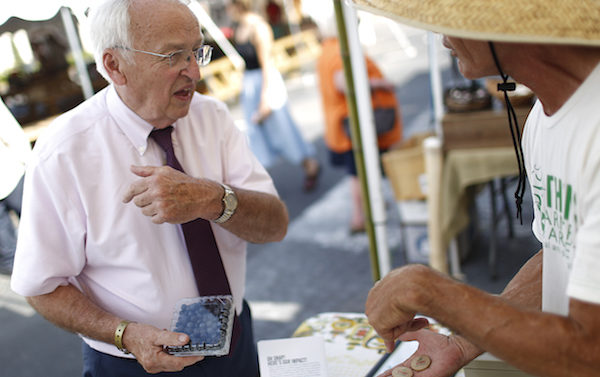 Kevin Concannon, undersecretary at the U.S. Department of Agriculture, toured the Athens Farmers Market and several local community gardens during a visit to Athens on Wednesday.

All to answer the questions of a poultry science professor, Kevin Concannon, a U.S. undersecretary of agriculture, came to UGA last week to discuss the myths and misconceptions about people on SNAP (the Supplement Nutrition Assistance Program, commonly known as food stamps, though recipients now get their benefits on a debit card).

Robert Beckstead, a poultry science professor at UGA, teaches a class about the effects of global agriculture on world culture. As part of that class, there is a project where his students are given the farm bill and asked to cut 20 percent of the budget.

“The majority of the students,” Beckstead said, “whether they were lazy or that’s what they really believed, they said, ‘Well, we’ll just cut 20 percent from [food stamps].’”

After this happened, Beckstead wondered why so many of his students believed that, so, after talking with a colleague, he was able to get Concannon to come down to Georgia to speak about food stamps.

Food stamps were first implemented in the U.S. following the election of President John F. Kennedy, who issued an executive order after witnessing extreme levels of poverty while campaigning in West Virginia. Following his leads, presidents Lyndon B. Johnson and Jimmy Carter both further refined food stamps to nearly the point they are today, save for the technological advances.

Around 45 million people across the country are dependent on SNAP, Concannon explained in front of a group of around 50 people, most of them PhD students.

Concannon outlined some of the eligibility requirements for SNAP, mainly that recipients must be a legal citizen. He was very critical of blogs that claimed the opposite, that undocumented immigrants were obtaining EBT cards and the benefits of those legally.

Not all of the myths are totally untrue, though. People do use EBT cards to purchase things other than the uncooked foods those cards are authorized to be used for. This is referred to as trafficking, and Concannon sees it as intolerable.

Concannon went on to explain that these issues are more likely to happen in smaller stores, rather than supermarkets. Because of this, in the future, the requirements for stores that accept EBT cards may be made stricter in order to avoid this fraud, as it would be harder for the smaller stores to meet these requirements.