A Crackdown on Beer Sales Threatens the Future of AthFest 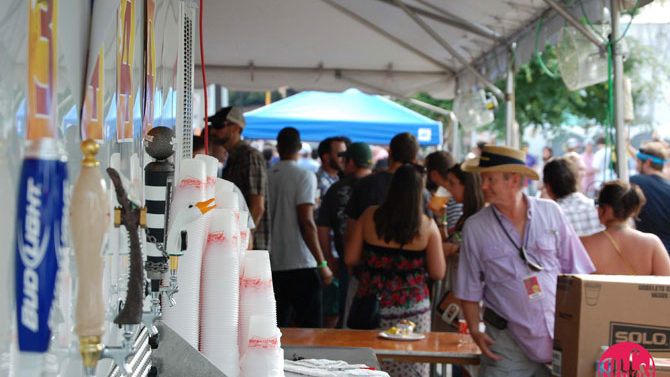 A quirk in state and local alcohol laws for special events has some Athens nonprofit directors reaching for the bottle.

A discrepancy between state and local permitting requirements to serve alcohol at special events shut down the Twilight Criterium’s beer gardens in April, putting the popular bike race in financial peril. They’re also cutting into AthFest’s profits—which will be donated to art and music education programs.

Gene Dixon, the founder of Twilight, says that the State Department of Revenue had determined that the permitting process used by Athens-Clarke County was in violation of the state ordinance. According to Dixon, DOR learned of the discrepancy—he suspects from wholesalers who are involved in a statewide dispute with craft brewers—and decided to crack down for the first time in the race’s 35-year history by shutting down Twilight’s beer gardens.

Combined with the threat of storms holding down registrations this year, the lack of revenue from beer sales means that the city and others will need to increase their financial support for the event to survive, Dixon says.

AthFest is in the same tough spot. In years past, AthFest would serve beer through businesses that had licenses to sell beer and wine by the glass, such as Trappeze. “When Twilight came around this last year,” says Jill Helme, executive director for AthFest Educates, “it came to the city’s attention that they had been enforcing that code incorrectly.” According to the state, multi-day special events, such as AthFest and Twilight, are supposed to sell alcohol not through bars or restaurants, but through licensed alcohol caterers, of which there are about 14 in Athens.

There is a misconception that AthFest produces a large profit, Helme says, but that is certainly not the case. This year, the projected cost to put on the three-day outdoor concert and pub crawl is $220,600. They expect to net around $3,300. With the state rules in effect, AthFest’s costs are projected to increase about $8,000–$10,000. That would put the festival in the hole about $5,000–$6,000.

Helme says she is thankful that AthFest and South Kitchen and Bar—a licensed alcohol caterer— were able to come to an agreement that would minimize the added costs to host the beer gardens through a licensed alcohol caterer. “Because of the graciousness of South Kitchen and Bar and Leon Farmer wholesalers,” she says, “it looks like we’re going to be able to have the beer gardens.”

There has been a big learning curve here, Helme says, so she and her team are working closely with DOR to make sure they are abiding by the proper laws and ordinances required by both Athens-Clarke County and the state.

South Kitchen and Bar agreed to help at a minimal cost, because they believe that AthFest is worth it. It’s not fair to expect that from alcohol caterers every year, however, Helme says.

AthFest has added two new promotions to try and offset the added expenses: soliciting donations in exchange for merchandise through an Indiegogo campaign and, for the first time, selling VIP tickets. This will allow attendees to be able to enjoy the show from the air-conditioned confines of Iron Factory on Washington Street. Iron Factory will be streaming the shows inside while offering drinks and hors d’oeuvres. One-day and three-day passes range from $75–$180.

Even with these added features, however, it is still unlikely that AthFest will be in the black without asking alcohol caterers to work at minimal cost to run the beer gardens. That then poses the question: If AthFest—an event raising money for charity—is in the red, is it even worth it to keep producing AthFest?

Not according to Helme. “The revenue we get from those beer gardens is incredibly important to the profitability of AthFest, and if we’re going to have to continue to take an $8,000–$10,000 chunk out of that every year, it really calls into question whether we can afford to put on AthFest every year,” she says.

A potential loophole, Helme says, is a state regulation that allows for nonprofit organizations to apply for six separate multi-day alcohol licenses for use in public areas, meaning that they would not have to go through the licensed alcohol caterers, since AthFest would be licensed. ACC has a stricter regulation, though. In Athens, nonprofits are only able to apply for two one-day licenses to sell drinks.

So why is it that ACC has such stricter regulations than those of the state? “I know in our community, we’re in a kind of special situation, because we are a party town,” Athens-Clarke County Commissioner Melissa Link says. “And I think there’s always the fear that if we make our rules a little bit too loose, then all of a sudden you get the rowdiest of the rowdy taking advantage of them.”

ACC is working to fix the problem though. “Between the state laws and the city laws, there’s a lot of disparity,” Link says, “and there are definitely some efforts going on behind the scenes to fix the disparity to allow these multi-day events to happen without any conflict between state and local law.”

Following the conclusion of AthFest, Helme says she will be working to petition the city to change this ordinance to fall in line with the state’s, which allows for the six multi-day permits. In doing that, AthFest would be able to run its beer gardens again without having to add on the extra cost of a licensed alcohol caterer.