Descendants of the Poll Tax Are Still Suppressing Minority Voters 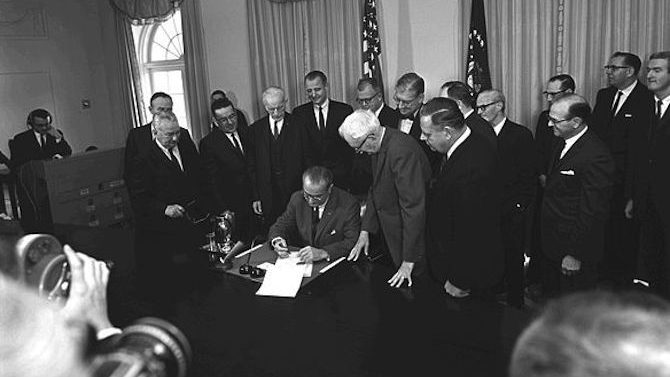 The 15th Amendment to the U.S. Constitution, ratified in 1870, says, “The right of citizens of the United States to vote shall not be denied or abridged by the United States or by any State on account of race, color, or previous condition of servitude.” Eighty-eight years, later the Atlanta Constitution reported on a Georgia General Assembly session devoted to exactly that.

The parliamentary maneuvering pitted allies of arch-segregationist Gov. Marvin Griffin against loyalists of more “moderate” Lt. Gov. Ernest Vandiver. Griffin’s floor leader, W. Colbert Hawkins, tried to revive the governor’s previously defeated proposal for a $1 poll tax by attaching it to a Vandiver bill. By adopting his amendment, Hawkins confidently asserted, “You will have done something for this bill, and you will have done something for the counties of Georgia that have a problem with Negro registration.”

While the amendment was crushed, Vandiver’s more “moderate” bill was no less aimed, as the Constitution reported, at “curbing the Negro vote.” What passed for moderation was a measure requiring any aspiring voter who couldn’t read and write a section of the Constitution to pass a “difficult” 30-question test.

Lest all this moderation give the wrong impression, Rep. Frank Twitty, a Vandiver ally, assured the members that Vandiver was stout on securing the franchise for whites. I can’t improve on the newspaper’s unadorned account of the debate:

“‘There has been some misapprehension on how the lieutenant governor and his friends stand on voter registration,’ Twitty said.

“But Twitty said he did not believe in taxing a man’s right to vote. He said repeal of the poll tax had been a good thing for the state.

“’Let’s tighten voter qualifications, but let’s not put a tax on a man’s right to vote,’ he said.

“He said the [Vandiver] bill would give local registrars the ‘weapon’ they need to combat ‘insidious organizations’ such as the NAACP by keeping off the registration rolls those ‘who ought not to be there.’

“‘Let’s give the local registrars the weapons they need to preserve the Southern way of life as we know it in Georgia,’” Twitty said.

“Rep. Raymond M. Reed… warned that the NAACP would ‘school’ Negroes to enable them to pass the 30-question test proposed by the bill.

“‘But who is going to school the poor white people who can’t pass the test?’ Reed asked. ‘If you want to play into the hands of the NAACP, this test will do it.’

“Rep. William M. Campbell… warned that measures such as the voting bill would ‘drive the Negroes into the NAACP.’

“‘We haven’t got the Negro problem in our county that some of you have,’ Campbell said. ‘We control them and we don’t have to come to the Legislature and ask for help to do it.’”

Now, fast forward to 2014, when then-Georgia Secretary of State Brian Kemp was running for reelection. That summer, the “Negro problem” hung in the air like humidity and gnats, as Kemp warned a Republican gathering that, “Democrats are working hard, and all these stories about them, you know, registering all these minority voters that are out there… If they can do that, they can win these elections in November.”

And when Kemp ran for governor in 2018, the “Negro problem” was exponentially more urgent, because his opponent was an African American, Stacey Abrams. Once again, he clumsily warned supporters: “And as worried as we were going into the start of early voting was the literally tens of millions of dollars that [the Abrams camp] are putting behind the get-out-the-vote effort to their base. A lot of that was absentee ballot requests. They have just an unprecedented number of that… which is something that continues to concern us, especially if everybody uses and exercises their right to vote…”

Meanwhile, the Trump administration had been scheming since Trump’s election in 2016 to include in the 2020 Census an item asking respondents whether they’re U.S. citizens. By a freakish turn of events, we learned that the citizenship question was the brainchild of Thomas Hofeller, a Republican operative who was, until his death in August 2018, a master of partisan gerrymandering. Without getting into the eye-glazing details, according to a May 30 federal court filing, he’d figured out that adding a citizenship question to the Census would allow states to apportion congressional and state legislative representation in a way that would advantage “Republicans and non-Hispanic whites.”

Poll taxes and literacy tests were already on life support in 1958, the former outlawed by constitutional amendment in 1964 and the latter by Congress a year later. While I shudder to think what extra-legislative methods for “controlling the Negroes” Rep. Campbell was darkly alluding to, the bitter reality is that he turned out to be on the side of history. The methods are more subtle, inventive and ingenious now than whatever he favored, but they stand in an unbroken line of “Negro-control” measures and institutions reaching much further back than 1958.

During the early years of the Republic, Americans thought of themselves as a forward-looking people eager to seize the future. It’s our continuing national tragedy that our native optimism has so often been betrayed by those among us who’d rather reenact ancient hatreds than enlist in great projects and enterprises aimed at our common flourishing.