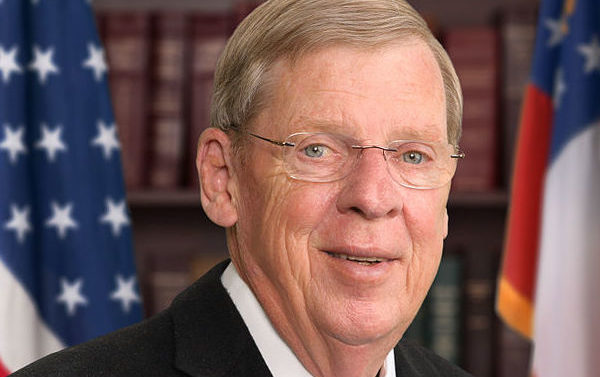 Isakson has suffered from Parkinson’s Disease for several years. He broke four ribs in a fall in July, and revealed in a statement today that he also had a growth removed from his kidney this week.

“In my 40 years in elected office, I have always put my constituents and my state of Georgia first,” he said. “With the mounting health challenges I am facing, I have concluded that I will not be able to do the job over the long term in the manner the citizens of Georgia deserve. It goes against every fiber of my being to leave in the middle of my Senate term, but I know it’s the right thing to do on behalf of my state.”

The Cobb County Republican, 74, is serving his third term, which ends in 2022.

Kemp will appoint someone to fill the seat until a special election is held in November 2020. The AJC speculates that Rep. Doug Collins, whose Gainesville district includes part of Athens, is a possibility. So are Lt. Gov. Geoff Duncan, Attorney General Chris Carr and state Senate President Pro Tem Butch Miller.

2018 gubernatorial candidate Stacey Abrams, who declined to challenge Sen. David Perdue, has already said she won’t run for Isakson’s seat, opting to focus on her voting rights initiative instead.

The format in 2020 will be a “jungle primary.” Because it will be a special election, there will be no partisan primaries, and all the candidates will be listed together on the November ballot. Although Georgia is quickly tilting blue—Abrams lost by just 1.4 percent—the setup could give the GOP the edge because it’s highly likely to result in a runoff. Conventional wisdom holds that Republican voters are more likely to turn out for a runoff than Democrats, as happened when Jim Martin pushed Sen. Saxby Chambliss to the brink in 2008.

Meanwhile, three Democrats—former Columbus mayor Teresa Tomlinson, Clarkston mayor Ted Terry and Sarah Riggs Amico, who ran for lieutenant governor last year—are vying to challenge Perdue in 2020. The junior senator could be vulnerable because he’s tied himself closely to President Trump, whose approval rating in Georgia is about 40 percent.

Democrats must pick up three or four Senate seats to take control of the chamber in 2021, and Georgia is widely viewed as one of their opportunities to do so.

This Might Finally Be the Year the Bulldogs Win It All