The Only Issue This November Is Coronavirus 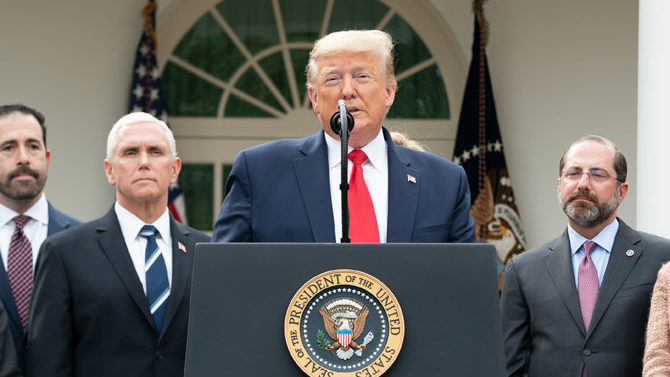 A couple of weeks ago, I wrote a school-marmy essay about Bernie Sanders’ socialism. That’s what I thought a lot of people would be talking about between now and November. Little did I know that Sanders’ campaign would implode and a novel coronavirus would explode a few days later.

I don’t know what we’ll be talking about until November, but I know what we should be talking about in between social distancing, incessantly washing our hands, sheltering in place, strategizing our toilet paper purchases and whatever else it takes to survive a COVID-19 pandemic. The first obligation of any government is to provide for the public health and safety of everybody under its jurisdiction. That ranks ahead of the economy, immigration, the state of the judiciary, the president’s re-election prospects and everything else. Those things don’t matter if the people who normally would have an interest in them are dead or dying in great numbers. I’ve lost track of the number of news stories I’ve seen reporting that the administration was caught flat-footed by the coronavirus outbreak. And even if you dismiss every single one of them as “fake news,” the president himself is on record publicly dismissing the threat as insignificant and the coverage of it as a Democratic Party “hoax.” Then he changed his tune, claiming that he knew all along COVID-19 was a dire emergency.

I leave it for the reader to decide whether Trump’s performance constitutes a failure to discharge the highest responsibility of his office. I have my own views about that, but I’m not here to peddle them. My point is: This isn’t a normal election cycle where we have the luxury of debating the wisdom of socialism versus capitalism, tax policy, the size of government, health care, the environment, discrimination or other similar issues. We have to put all that on hold while we make a national decision about a single question: Is Donald Trump failing in his duty to discharge the highest responsibility of his office?

It isn’t like this thing hit us out of the blue. It won’t be the last pandemic of this magnitude we’ll ever see, nor is it the first. The 1918 Spanish flu killed about 675,000 Americans. That was a long time ago, but the one we’re struggling with now is the fourth since 1957, when the pandemic flu put me down while I was on a Coast Guard cutter somewhere between Cape May, NJ, and Groton, CT. I wasn’t afraid I was going to die. I was afraid I wasn’t. There were two more after that, one in 1968 and another in 2009. These things happen regularly, and as the world’s population gets more mobile, there’s every reason to think they’ll keep happening more often than before.

So I’m thinking that for this election, we should all become single-issue voters. We can’t do the usual balancing tests where we ask whether the fact that a candidate sucks on one of our priority issues is outweighed by the fact that he or she is golden on another. Can’t do that this time, because nothing outweighs public health and safety—that’s the number one job; face-planting on that is disqualifying, full stop.

If anybody reads this, somebody’s bound to say that I’m politicizing a national crisis. To which I say: Damn straight I am. And if you think there’s something wrong with that, it can only be because you’re operating with a corrupt idea of what politics is, equating it with mere craven partisan advantage. But here’s the thing: While the highest obligation of a government is to ensure public health and safety, under our system of self-government, it’s the highest duty of the electorate to elect not Democrats, Republicans or Bull Moose Party members to office, but people of whatever party who are capable of meeting that obligation, and to remove them when they don’t. If Trump gets this all wrong, there are plenty of people he can point the finger of blame at, notwithstanding the famous sign on Harry Truman’s desk that said, “The buck stops here.” That’s a colorful and bracing story. But if you’re qualified to vote and want to know where the buck is really going to stop in November, go look in a mirror.