Why Athens Townies Are Ambivalent About UGA Students

There’s really nothing like Athens in the summer. It’s peaceful but still fun in a way that I am honestly hesitant to describe, lest college kids decide to find out for themselves and ruin it for the rest of us. I really don’t want to be mean here and say, “I love it when you all leave,” but honestly? I love it when you all leave. The change is instant. Suddenly the traffic thins out and all the lines get shorter. Every year in May, there’s a certain morning when I wake up and Athens feels like an actual small town. 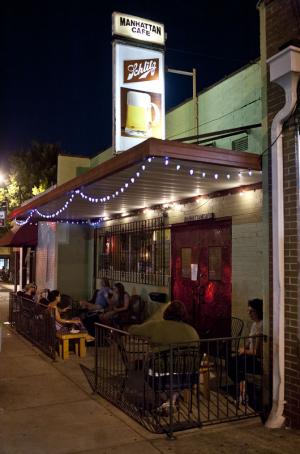 Behave yourselves when you cross Lumpkin.

I’ll have to say goodbye to low-key party nights now that the fall semester is getting ready to start up again, which means that the University of Georgia’s students, our city’s most gracious benefactors, will return. I’ve noticed there’s a beginning-of-year trend of campus Greeks hosting parties with either lame or racist themes, and I know the semester’s underway when I see throngs of girls dressed as Native Americans or “the ’80s” walking up Hancock Avenue on their way to… wherever it is that they go. Soon the quiet patios will be dotted with vomiting Dawgs fans and couples trying to give each other discreet handies under the tables. (I saw this with my own eyes.) But watching a couple be gross in public definitely beats out some of the other stuff that comes along with the return of the UGA student body.

Like street harassment. Athens townies aren’t innocent of this offense by any stretch—let me be very clear on that—but the harassment that I and others have encountered at the hands of college boys is often peppered with a promise of violence that ratchets the experience up from simply annoying to truly terrifying. She doesn’t wanna dance? Fine. Go find another lady to dance with instead of flipping out and calling women bitches to their faces. Did you bump into a lady on the street? That’s okay, just say “excuse me” and keep on walking, unlike the frat boy who threatened to beat the hell out of me in front of Max last year. He was with a throng of loafer-wearing knuckle draggers who were probably all named Tucker or Carter, and they disappeared into that unfortunate house at Washington and Pulaski.

This is the main reason why I love it when y’all ain’t here. Because I don’t have to fear for my life when I’m walking down Washington Street.

And seriously—what the hell are y’all even doing anywhere west of Lumpkin? I promise you there is nothing on that end of town for anyone between the ages of 18–22. Really, it’s just a bunch of laid-back townie bars that do lame things like host sexy art shows and vinyl-only dance parties. The eateries serve totally lame and boring food like award-winning barbecue, Korean-style street tacos and chicken ‘n’ waffle club sandwiches. They make real drinks like Old Fashioneds and Sidecars. Sometimes, there are drag queens, and the bartenders do tacky things like learn your name. That sounds lame, right? It is. I swear: It sucks. Please don’t ruin my vinyl dance parties.

As you can see, those of us who have put down roots in Athens love our little town. There’s a protectiveness that the rooted townie exhibits towards Athens, as well, so students shouldn’t buck back too hard against us. You’ll always lose.

I’ve seen townies intervene on many lecherous dudes with Bieber bangs screaming at women in the street or trying to drag intoxicated girls into buildings and cars that they don’t want to enter. A lot of the worst behavior involves either race or gender (big surprise there) so don’t walk across Lumpkin thinking that you’re gonna make fun of the Asian guy or touch the black woman’s hair. I’d also like to say that the phrase, “I’ve never slept with a black chick before,” is less effective for actually getting a black woman naked than it is for making sure she’ll hate you forever. That’s not to say that the women and kids of color at UGA consider these to be harmless words and perfectly viable pick-up lines. I’m just saying that a self-sufficient person who no longer answers to her parents is more likely to say something back than your typical college counterpart.

I’m not trying to scare you. I’m not trying to threaten you. I’ve spent the past two months swimming almost every day and walking home safely, and soon we’re gonna lose all that delicious downtown parking. I’ve always enjoyed watching street fights from the upstairs bar at Transmet, though, so I guess the return of football season isn’t so bad.

I should probably just take a deep breath, program the numbers for a taxi service and the sexual assault hotline into my phone and be prepared to shove my way through the crowds. Droves of white kids in sombreros and sarapes will be clogging up the sidewalk come August. Welcome back, I guess. I’ll try not to burn anyone with my cigarette when I walk past.