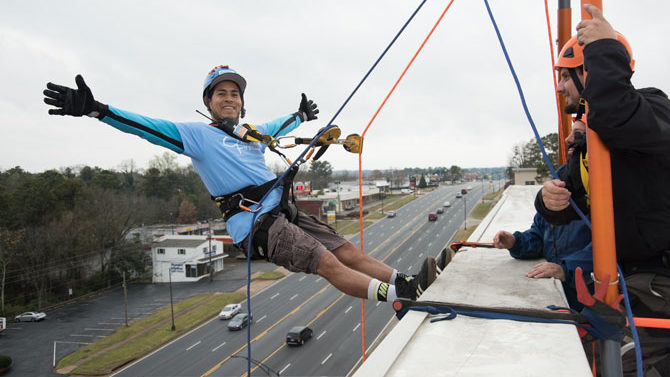 With school in full swing and everybody back in town, local philanthropists are kicking off the fall fundraising season on Saturday, Aug. 25 with three events that reflect Athens’ unique spirit.

The busy day kicks off with Children First Inc.’s biggest event of the year, Over The Edge. Children First is a local children’s advocacy nonprofit, and the $30,000 fundraising goal for the event goes toward the maintenance and development of programs such as Athens-Oconee CASA (an organization that provides qualified special advocates for minors in court proceedings), the Nancy Travis Childcare Project and Interfaith Hospitality Network (a group of churches that house homeless families).

If it’s hard to imagine a rooftop rappelling party, Children First Executive Director Susie Weller describes the event as having the mood of a road race—fast paced, fun and loud.  Participants will be rappelling down the West Broad Street side of the SPARC building from 9 a.m.–2 p.m., and there will also be music, food, a bouncy house, kids games, face painting and more.

This will be Wells’ third year rappelling for the love of local kids, but Mayor-elect Kelly Girtz’s first. “I’ve been on ladders and scaffolding often doing construction work, but the idea of rappelling does have me a bit nervous,” he says, but he intends to dive right in. “Life is for living, so you’d better find things that bring you energy, and balance the work with some fun. I have a hard time saying ‘no’ to events like this.”

Girtz has a busy day ahead of him, because later he’ll be lip-syncing for his life at the 17th Annual Groovy Nights, a Project Safe fundraiser and lip sync battle that aims to raise awareness of (and funds for) the nonprofit’s mission of support and advocacy for survivors of intimate partner violence. Tickets for the night of dancing, vintage cocktail specials, henna tattoos and tarot readings at The Foundry are $25 or $18 for students.

This will also be Girtz’s first Groovy Nights, but he’s being tight-lipped on what we can expect.  “I’ll be lip-syncing a hit from the ’80s… something against type,” he says. “I’ll leave ya guessing.”

That’s a pretty juicy teaser, since Groovy Nights is much more than karaoke or unenthused pantomiming. Participants bring a Vegas-style flair to their performances by going all-out with hair, makeup, costumes and dance routines. A cursory glance around their Facebook page shows that even attendees, let alone competitors, have to bring the heat with killer looks. Someone’s gotta win the costume contest, after all.

Last year saw the introduction of the competitive “’70s vs. ’80s” angle, and this year brings a change of venue from the 40 Watt Club to The Foundry. Attendees vote for the lip sync winners by donating to favorite performers, and those funds go to directly to keeping Project Safe thriving.

Also Saturday, another fundraiser, Will Rock 4 Food, will kick off at Terrapin Brewing Co. at 4:30 p.m. WR4F benefits Food 2 Kids, a Food Bank of Northeast Georgia program. One in five Athens residents are food insecure, according to the U.S. Department of Agriculture, and “100 percent of the kids in all of Clarke [County] receive free or reduced-price lunch due to the extremely high food insecurity levels,” says Susan Dodson, program coordinator for the food bank. Food 2 Kids provides food to local kids who need it, and it even has a waiting list.

The fundraiser happens in Terrapin’s beer garden, and Dodson says they’ve gone all-out for their 10th anniversary event this year. They’ll have over 21 food vendors and bigger raffle prizes, with week-long resort packages on the table. They’ve beefed up their social media presence by getting a Snapchat filter for the event, and local musicians will include Pickled Holler, Spectralite and Ty Manning and the Slawdog Biscuits, and local actress Lisa Mende of “Seinfeld” fame will be the DJ.

That’s a pretty jam-packed 24 hours for local philanthropists. Girtz isn’t headlining WR4F, but he’s known to enjoy a beer, and it ends at 7:30 p.m.—which would leave him just enough time to hightail it over to the Foundry from Newton Bridge Road.