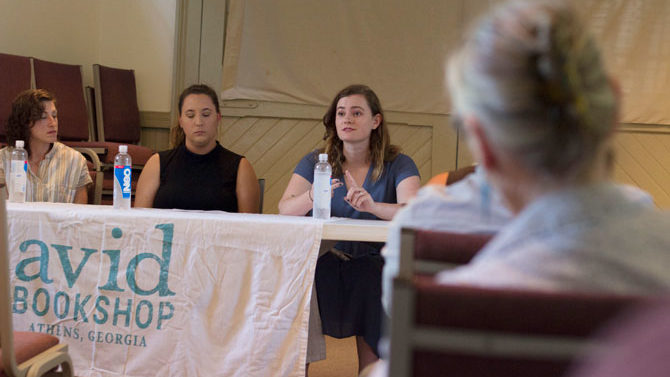 An all-female panel wrangled with issues of misconduct by writers and other creative people, sexual assault and censorship in a discussion last week sponsored by Avid Bookshop.

#MeToo, a phrase coined by activist Tarana Burke in 1997 and recently turned into a hashtag, and Junot Diaz, a Pulitzer Prize winner accused of sexual misconduct, were mentioned at the start—the clear catalysts for this discussion. Survivors now “feel that someone is actually listening to them,” said Kendall Worman, community involvement and volunteer coordinator at the local domestic violence nonprofit Project Safe, “and not saying, ‘Oh, what were you doing, why did you get yourself in this situation where something like this could happen?’ but rather placing the blame on the perpetrators and the parties responsible. It’s really an amazing thing to see, especially with survivors and the historical [response to assault]. They finally have a voice.”

Holding perpetrators accountable comes into play with how academics, publishers, other writers, booksellers and advocates respond to these allegations. Esra Mirze Santesso, associate department head of English at UGA, was an advocate of temperance when it came to judging a person’s guilt, suggesting that it’s best to let current systems of justice make their decision before deciding on a personal response. “We have to put our faith in the legal system and be able to separate between accusation, allegation, carnality, willfulness and lawlessness,” she said.

But the justice system has not always been able to appropriately discipline men for sexually motivated crimes. Plenty of legislation is meant to combat sexual violence, but only 31 percent of assaults are actually reported, according to the Rape, Abuse and Incest National Network, or RAINN. Only 1.1 percent are referred to prosecutors, and only 0.6 percent of convicted rapists ever see any jail time. #MeToo has created an alternative to the systems that have historically failed to provide proper support to survivors, and it also seeks to hold their perpetrators accountable when the legal system can’t or won’t.

To those who cry that moralist booksellers and publishers are stifling future literary classics, Xhenet Aliu, a local author and librarian, said, “All legitimate information has a right to exist, but nobody has the right to be published. I can guarantee you that there are millions of people with valuable things to contribute who will never get a book contract. There’s someone out there who can write just as well [as an abuser].”

It’s more complicated for publishers who wish to distance themselves from abusers, especially where contracts are involved. The academic University of Georgia Press is considering including a morality clause in contracts after director Lisa Bayer said she would cancel the contracts of repeat harassers at a Southern Association of Women Historians meeting. The idea is still very new, according to Jordan Stepp, intellectual property manager for UGA Press.

“We’re still wrangling over the language and how to do [the clause], because on one hand, I don’t want to publish an abuser’s book,” Stepp said. “On the other hand, there’s the legal definition of what constitutes misconduct or something immoral. Just 30 years ago, being gay was considered immoral, so we could have dropped someone for that. All it takes is the wrong person in power to use certain language to censor people. So, it’s a very delicate balancing act of where law and morals meet, because what is illegal isn’t always immoral, and what’s immoral isn’t always against the law.”

Academics have to face a complicated question of their own: Is it right to stop teaching works by known abusers—and just generally bad people—when those works are of great academic or cultural value? “In literary studies, we tend to think that there’s a certain distance between the author and the work that they create,” Santesso said. “That’s when we treat the text in isolation. The question, to me, is what is the relationship between the author and the work they produce?”

Aliu used the example of Diaz. “The misogyny is all on the page,” she said of his works, “but I always read it as a kind of challenge to the misogyny of the culture that he comes from. And then hearing the revelations about him—he’s not challenging misogyny at all, he’s reinforcing it. And so it changed how I responded to that work.” What at first seemed to be a clever way to challenge power structures with marginalized voices turned out not to be that thoughtful at all, and it makes Diaz’s work less interesting and less subversive in hindsight.

“I don’t want you to give them money,” said Kate Lorraine Rascoe, an Avid bookseller, “but I think it’s difficult when you ask, ‘Does this art have this effect on me?’ or ‘Do we want this person to be in the canon 100 years from now?’ My answer is no. We have a chance to not have horrible people in the canon. We can say no right now.”