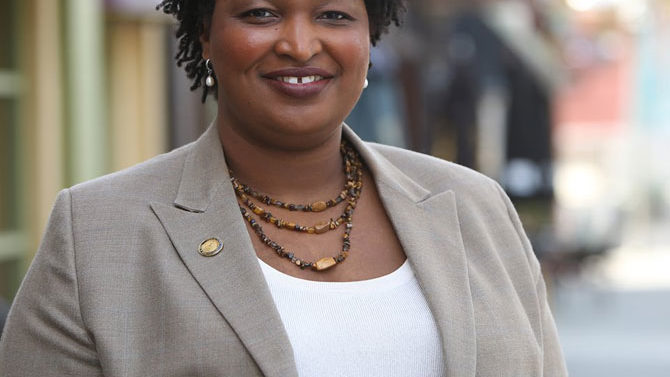 Stacey Abrams is hot right now. Her gubernatorial run gives hope to voters whom the Democratic Party has neglected, much to its detriment: people of color, millennials, the LGBT+ community, immigrants and the working poor. She is riding a wave of political change that follows the fallout from the most shocking presidential election in a lifetime, and citizens from all kinds of backgrounds, with all kinds of identities, are running for—and winning—seats in local and state governments.

People are navigating power structures and systems that were never designed for their participation, and perhaps were even designed to impede their access. Abrams has lots of experience with being the only (insert identity here) in the room, and she’s cultivated quite the skill set for acquiring and holding power where she ordinarily wouldn’t find it. In Minority Leader: How to Lead From the Outside and Make Real Change—which she is promoting Tuesday, June 5 at the 40 Watt Club in an event sponsored by Avid Bookshop—she shares her experiences and lays out techniques for marginalized people to navigate their way to the top of systems and industries that have long been dominated by those who look nothing like them.

Is Abrams fit to give this advice? Absolutely. A Yale Law School graduate and Truman scholar, Abrams worked as a tax lawyer before being appointed as a deputy city attorney in Atlanta. She served 10 years in the Georgia House of Representatives and led House Democrats for six. She’s an accomplished novelist and co-founder of more than one successful corporation, and we can also thank her for helping to bring us the WNBA’s Atlanta Dream. She’s got so many feathers in her cap, you can’t really see the cap. Of course she’s running for governor.

The story of what it took for Abrams to climb to the top is very different from ones you ordinarily find in this type of self-empowerment tome. In Chapter Five, “Money Matters,” Abrams takes on the common recommendation that entrepreneurs seek out “small” personal loans of $10,000 or so to open a business or finance a political campaign. But what if everyone you know is poor? “Wealth gaps are staggeringly wide,” Abrams points out, “and they concentrate in communities.” She puts that gap in stark racial terms with statistics from 2013, when the average white household was worth $142,000, but Latinos had $13,700 and black families $11,000 in wealth. Borrowing thousands of dollars—heck, even being comfortable enough to ask—is a strategy more fit for some than others.

Abrams’ solution is smart money management from the start, side hustles, federal loans and believing in yourself and your venture enough to ask via old-fashioned fundraising techniques. She shares her own stories of horrifying money mismanagement in college and young adulthood—stories told with compassion for her parents, who weren’t able to teach her smart financing because they never made it to a place of financial stability of their own. Abrams is aware of the power systems that impede success for people like her parents, college graduates who did everything right but were never able to get the middle-class lifestyle promised to them by the American Dream. If this is a person’s reality, then who do they ask for a $10,000 personal loan?

It’s refreshing to read about financing in such realistic terms and to be given advice that is actually usable, as opposed to coming off as a way to get my dad to laugh in my face. Abrams’ otherness gives her a unique perspective and experience in business and state politics, and her successes speak to the value of the blueprint she lays out in Minority Leader. Young organizers and radicals will find practical solutions to problems like finding investors or volunteers, coupled with encouragement to dampen the naysaying of our own minds—to be bold and to use the resources available to make change.

This book is certainly written for a specific audience’s very specific need, but anyone wanting to know more about Abrams or the life path of a nontraditional politician would find the anecdotes engaging, funny at times and a little shocking, even. Abrams displays not an ounce of shame when talking about her incarcerated brother, Walter, speaking of him as casually and fondly as she does of her sister, Leslie, a federal judge with two Ivy League degrees. Abrams is nothing like the classic image of a politician, and Minority Leader aims to disseminate the trick to breaking in and getting ahead, for the sake of us all.