The Future Is Bright for Democrats, Thanks to Demographics (and Trump) 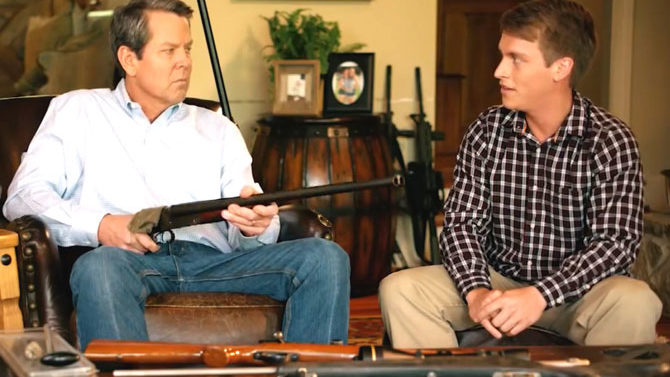 Well, here it is the season again for one of the Ol’ Bloviator’s biannual, unsolicited, coarsely crafted and thoroughly opinionated post-election rant. Despite the O.B.’s expectations that, as is so often their wont, the Dems would find a way to blow the 2018 midterms, their Great Orange Antagonist seemed hellbent on seeing that that didn’t happen.

Accordingly, he focused on the imminent threat to our fundamental institutions, values and very way of life posed by a sinister caravan of hideously diseased gangbangers and dope smugglers, many of them cleverly disguised as small children, and all of them concealing their subversive intent by posing as asylum-seekers. With this vicious, menacing horde scarcely 1,000 miles from overrunning the sovereign state of Texas, the Exaggerator-in-Chief blew up the holidays of several thousand U.S. troops—“Happy Thanksgiving from Mar-a-Lago and Thanks for your Service!”—by dispatching them to our critically imperiled border, where they set up camp and gazed longingly on nearby Whataburgers while munching forlornly on their MREs.

Following the Orange One’s lead, Arizona Senate hopeful Martha McSally dismissed all the Democratic yammering about health care and insisted on talking about the things that “really matter” to voters in her state—specifically, the bloodcurdling menace posed by the caravan. When it became clear that nearly a decade’s worth of polls had been correct in showing that Americans like Obamacare a lot more than ol’ Mitch McConnell and them want to admit, McSally became one of a number of Trump Party representatives who, despite voting to repeal the Affordable Care Act, claimed belatedly to have supported protections for those with pre-existing conditions all along. In the end, it appears that many voters found these deathbed conversion tales unpersuasive.

Of course, it didn’t look that way at first blush, before the real countin’ was by any means done. Early on, with the Dems clinging to a scant House majority and apparently down three seats in the Senate, the eponymous leader of the Trump Party took to the air to mock a selective list of those who ostensibly lost their seats on his side of the aisle by showing insufficient ardor for the one-and-only Him. When the fog finally cleared around the courthouse, however, and the Dems claimed 40 new House seats, it appeared that a great many more “Trump or Bust!” congressional aspirants had, well, busted. If the implications of the final accounting would be officially written off as “fake news” by the Trump White House, they were all too real for the vanquished Trump troops.

Meanwhile, their hard-partying partisan conquerors might have tempered their gaiety over the outcome by acknowledging that, in many cases, the opposition took much of the challenge out of coming across as the lesser of two evils. It is one thing to win an election by scoring lower on the rascality scale than one’s opponents, and quite another to actually govern and lead on that basis. Although House Dems seemed to have lucked out by being matched up against an antagonist whose disapproval rating just hit 60 percent, we might note that their own presumed leader stands in comparable public disfavor.

How much of the scorn directed at Nancy Pelosi is her own doing and how much is the result of damn near a decade of relentless demonizing by the opposition is anybody’s guess, but on the face of it, she seems set up as the near-perfect foil for the master mocker on the other side. On the other hand, there is no contemporary politician less likely to wither in the face of DT’s bluster, and while she also is seen as more than mildly polarizing, she is—and always will be—much smarter than he is, and certainly much savvier about mustering and managing congressional power.

Not all of Pelosi’s challengers stand to emerge from enemy ranks, however. Her newly swollen House ranks include a number of fire-breathing, kale-scorching lefties consumed with a lust for revenge and thoroughly disdainful of the wussiness of compromise. It might seem that Mitch of Many Chins managed to establish sheer obstructionism as a legitimate political end in itself, but obstructing simply for the pure-tee hell of it doesn’t seem as comfortable a tactical fit for the Dems. In this circumstance, however, rather than mere political posturing, making the case that blocking practically any initiative coming out of the White House is simply safeguarding the national interest is more likely to come across as a simple statement of fact.

It wouldn’t do to abandon this harangue without a word or two about what to make of the much-publicized and tenaciously contested Georgia gubernatorial race. By single-mindedly dedicating his tenure as secretary of state to keeping the electorate as white and native-born as possible, Brian “How do I disfranchise thee? Let me count the ways!” Kemp not only paved the way for his own run for governor, but left Georgia standing unrivaled as the nation’s most voter-unfriendly state in 2018.

We could argue all day about how many thousands of legitimate voters Ol’ Briney took down, but the bigger point here is that, after doing his utterly audacious damnedest, he still escaped a runoff with a liberal black woman by some 17,000 votes in a state that, not long ago, looked to be a GOP lock for generations to come. For example, where Republican Nathan Deal carried Gwinnett County in 2010 with 57 percent of the vote, Stacey Abrams claimed precisely the same share this time around. Ditto for Cobb County, where Deal and Abrams each garnered 54 percent support just eight years apart.

Without discounting the importance of Abrams’ strong campaign in the least, the essence of the tale lies in the rapidly shifting demographics of population diversity, which, in a nutshell, suggest why, in statewide elections and presidential contests as well, the Republican numerical advantage over Democrats in Georgia has not only passed its peak but narrowed dramatically. Consider that Deal’s 258,000-vote victory margin in 2010 had slipped to 200,000 four years later, before shriveling this year to an emaciated 55,000 for the voter-erasing Kemp.

To be sure, Kemp’s shotgun-totin’, pickup-drivin’ Gomer guise served him well in 139 rural counties, where his victory margin of 38 percent actually bested Deal’s in 2014 by 10 points. To be just as sure, however, the growth rate in these sparsely populated outposts is but one-third of that in the bigger suburban counties, where nearly 60 percent of Georgia’s voters now reside, and the Democrats’ 4 percent victory margin in 2014 swelled to 17 percent this year. With rural Georgia looking even redder, the Dems ain’t flipping the legislature anytime soon.

Still, if Briney and his ilk mean to keep claiming statewide offices by playing on the same prejudices and fears that Gene Talmadge once manipulated so expertly, consider that the county-unit system—which gave no more than 5,000 voters from any three tiny rural counties the same electoral clout as the city slickers in Fulton—went out well over half a century ago. They’d best get themselves to schemin’ up some better ways to keep more city and metro folks, black and white, away from the polls.

Cobb is the B. Phinizy Spalding Professor of History emeritus at UGA.