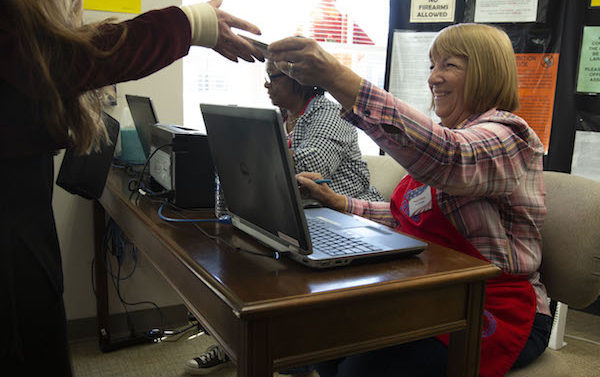 The Athens-Clarke County Board of Elections broke state law when it went into executive session in September to discuss opening an early voting site at Cedar Shoals High School, according to the ACC Attorney’s office.

Tension continued in the Board of Elections on Tuesday as they discussed the closed-door meeting. The attorney’s office concluded the board was in violation of the Georgia Open Meetings act. Assistant county attorney John Hawkins provided the results of the review to board members.

On Sept. 4, the BOE decided to go to executive session to discuss “personnel matters” since more poll workers would be needed for an additional early voting location. Under the Open Meetings Act, the board is permitted to go to executive session if it involved personnel matters. However, other topics were discussed, and the personnel exemption is meant to cover discussions about specific employees or candidates for positions, not hiring more personnel in general.

Hawkins told the board it needed to amend minutes of the Sept. 4 executive session; discuss and vote upon having an upcoming open session to discuss whether to gather data on voting sites for East Athens during the 2019 election; and attend a training session on open meetings and records. Lastly, Hawkins recommended the board ask the county attorney’s office for guidance on open meetings and records if needed in the future.

According to minutes amended during Tuesday’s meeting, the executive session including a discussion about the Cedar Shoals High School as an early voting site and the history of reviewing Eastside locations as possible early voting sites. There was another discussion regarding board member Jesse Evan’s contact with the Georgia Secretary of State’s Office about offering the additional early voting location.

At Tuesday’s meeting, all board members stated they were in favor of adding an Eastside early voting location during the executive session when discussing the minutes. However, Evans said that was not the case, and that not all board members were in favor of having an Eastside early voting location in 2018 during the September executive session. They all agreed on opening one in 2019.

Board Chairman Charles Knapper said Evans had previously mentioned offering an Eastside early voting location; however, the Cedar Shoals location was not brought up until the “last minute.”

Board member Alison McCullick also said that several of the board members felt the Cedar Shoals location was mentioned at the last minute.

“Finding a location is one thing. Preparing a secure election is another,” McCullick said.

Evans said the idea was not pitched at the last minute.

Evans told Flagpole he raised the issue of early voting on the Eastside on Aug. 21 and followed up on Aug. 24 and Aug. 27—69 days prior to Oct. 29, the day the early voting pilot was potentially going to begin, Evans said.

“Now, they’re doing damage control stuff because the very thing they were preventing [from being] public in that executive session is now becoming public,” he said. “They’re trying to give that a facelift so it doesn’t look as bad as it is.”

ACC has never had early voting at Cedar Shoals since the state began allowing it in 2008. Early voting has been held downtown for the past 10 years, and more recently at the ACC Library and UGA’s Tate Center.

The Board of Elections’ next meeting will be Jan. 8.