Like the Great Depression, Coronavirus Could Change a Generation 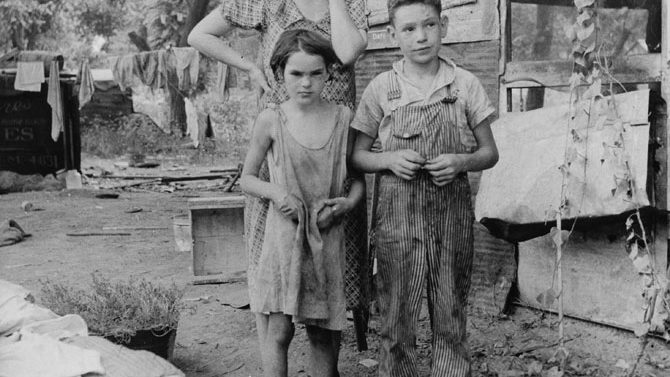 Unemployment stood at 25% and 7,000 banks had folded in the last three years when President Franklin D. Roosevelt delivered his first inaugural address on Mar. 4, 1933. Even as he cautioned his fellow Americans that “the only thing we have to fear is fear itself,” he also conceded that “only a foolish optimist can deny the dark realities of the moment.”

The realities of that moment still appear grimmer than those of the current one. Yet with a staggering 22 million Americans filing for unemployment over the last four weeks, it is difficult to dismiss projections of jobless rates reaching or even eclipsing the Depression-era peak that confronted Roosevelt on that first day of his presidency. The desperate, decade-long struggle to keep their families fed, clothed and under the same roof left an indelible imprint on the mindset of many of the adults who survived the Great Depression. If that historic effect is any indication, we may emerge from our own global crisis to find our habits and lifestyles significantly altered as well—a prospect that runs counter to the blithe assumptions of some politicians and presidential advisers that the U.S. economy will quickly return to “normal” once it’s reopened.

Most Americans continued to trust Roosevelt even when his New Deal recovery efforts faltered: Even after unemployment climbed back into the vicinity of 20% in 1937–38 and his Democratic Party suffered major losses in the 1938 midterm elections, FDR’s presidential approval rating still stood at 54%. Still, a great many of his supporters never managed to divest themselves entirely of the fear that he warned could undermine efforts to promote recovery. In fact, for many of them, that fear endured long after the recovery arrived.

A vital part of FDR’s recovery plan was not simply getting Americans back to work, but persuading them, insofar as it was possible, to resume their normal spending patterns. For example, the Civilian Conservation Corps was expected to preserve and beautify the natural landscape, but its guidelines stipulated not only that the young men it employed were to come from families on relief, but that they must send all but $5 of the $30 they earned each month back to those families, who presumably would have no choice but to spend it. The upshot was supposed to be thousands of mini-stimuli injected into a near-comatose consumer economy, raising prices and encouraging businesses to reopen.

However, as some oral histories reveal, much of the money sent home to parents wound up stuffed in Mason jars or sewn into the corners of sheets. Unprecedented federal spending was aimed at boosting employment and thereby consumer demand; this should have had a net inflationary effect. Yet the years 1930–1940 registered a cumulative 19% decline in the inflation rate—reflecting, at least in some measure, the extreme reluctance of frightened Americans to spend on anything but absolute necessities.

Painfully aware of how abruptly the rhetoric of “permanent prosperity” had turned to ashes in the mouths of the leading economic experts of the 1920s, a great many Americans clung to the parsimonious habits ingrained by their long ordeal of deprivation, even after World War II finally brought the long-awaited economic recovery. Their children and grandchildren will surely recall their steadfast resistance to purchasing any but the cheapest consumer items for themselves. Nor was there any excuse for tossing perfectly good aluminum foil or wax paper after a single use, or any reason to be in a hurry to dispose of paper bags or any jar, bottle or box that might come in handy for storing something one day.

While there is certainly no basis at this point for anticipating that the economic consequences of the coronavirus onslaught will be comparable, in some apples-to-apples computation, with the enormous losses registered between 1929–1933, those who actually find themselves caught up in such crises seldom assess the severity of their situation in purely objective terms. We may have the means to calculate that, adjusted for inflation, the approximately $41 billion price tag for the entire New Deal amounts to roughly 38% of the cost of the initial coronavirus economic stimulus package. But there is no formula for determining how the psychological effects of spending several years trying to stave off absolute impoverishment might compare to those of fearing that you or someone you care about might suddenly fall ill and die while stressing out about your current or possible economic jeopardy.

While we are unlikely to witness anything approaching the enduring parsimony of the Depression generation, once the immediate crisis has passed, an explosive release of pent-up purchasing power may not be in the cards either. Apart from questions of job security, millions of what just weeks ago seemed comfortably middle-class parents will be facing a dramatic shrinkage in the portfolios they were counting on to educate their kids, anchor their 401(k) plans or provide collateral for a loan to buy their dream house. Whatever its duration, a period of  austerity may be in the offing. Throw in the health risks possibly associated with venturing out to malls, restaurants, bars, theaters, etc., and you hardly have the recipe for a post-pandemic surge, much less one while the pandemic is still very much with us.

Much as the economic devastation of the Great Depression brought lasting changes to the consuming habits of an entire generation, FDR’s approach to combating it left its own enduring mark. Federal involvement in certain public-service initiatives, such as disease prevention and social education, had expanded notably during the “Progressive Era” of the early 20th century, but taking action to relieve economic distress was another matter.

President Grover Cleveland declared in 1887 that “though the people support the government, the government should not support the people.” Cleveland’s dictum largely held sway until the sudden profusion of breadlines, soup kitchens and homeless encampments marking the onset of the Depression put the lie to his insistence that “the friendliness and charity of our countrymen can always be relied upon to relieve their fellow-citizens in misfortune.” The severity of the situation finally moved even the hidebound free-marketeer Herbert Hoover to agree in 1932 to set aside $2 billion for loans to banks, credit agencies and other businesses. Though more akin to a drop in an ocean than a bucket, President Hoover’s modest rescue initiative nonetheless amounted to a new precedent upon which his successor would expand and improvise repeatedly as the Depression defiantly dragged on.

After FDR took office, in a five-year whirlwind of legislation ranging from the Agricultural Adjustment Administration to the Social Security Act to the Fair Labor Standards Act, his New Deal established a federal presence in practically every aspect of national economic life. However, Roosevelt had proceeded in such disjointed and piecemeal fashion that, ultimately, even his economic advisor Alvin Hansen was forced to admit that, “I really do not know what the basic principle of the New Deal is.” FDR had effectively, if unwittingly, as the historian Paul Conkin observed, created what amounted to a virtual “welfare state.” Yet because he had given his fellow Americans little reason to see it that way or view it holistically in any sense, succeeding generations were inclined to consider the expanded federal presence in national life largely in terms of how its component programs benefited them. How quickly and completely they had come to take those benefits for granted was apparent in Republican President Dwight D. Eisenhower’s blunt warning in 1954 that setting out to abolish Social Security, farm subsidy programs or other vestiges of the New Deal would be suicidal “for any political party.” Grudgingly acknowledging as much, even latter-day Republican critics of the post-New Deal welfare state have largely spurned ripping it out by its roots in favor of repeatedly hacking away at its branches.

Yet for all their zeal for slashing federal social and economic welfare programs, Republicans have shown no such ardor for the tax hikes or other political compromises, such as expanding Medicaid, that would allow the states to begin filling the void in public assistance created by federal cutbacks. When the coronavirus crisis began, state and local leaders initially turned to Washington for assistance in relieving the healthcare crises confronting their respective constituencies. However, in this case, the response to their demands has been limited and slow in coming, and the extent of the federal government’s obligation to fulfill them has been subject to much debate. Still uncertain of the details and parameters of a constantly shape-shifting federal response, several governors began to forge their own collaborative plans to address the challenges they face. Though he earlier insisted that he was the one with the power to reopen state economies, President Trump himself has more recently declared that decision-making about this facet of the crisis was the responsibility of each individual governor.

The meaning of the New Deal’s expansion of federal responsibility was never spelled out in so many words, but the American people came to understand what it meant for them as individuals. If the coronavirus response continues in its currently contested form, history suggests that today’s citizens will discern that the burden of responsibility is shifting back to the states—and that they may reset their long-term expectations accordingly.

Meanwhile, Americans may not emerge from the current coronavirus siege embracing anything approaching the extreme, self-imposed austerity of those directly impacted by the Great Depression, and no reduction in federal responsibilities in the current situation is likely to take the country all the way back to pre-New Deal mode. Still, it would be unwise to assume that the severe jolt to their sense of physical as well as material well-being inflicted by this crisis will leave no mark on their habits and attitudes going forward.

Like other era-defining historical trials, the Great Depression finally passed. But, both on an individual and governmental level, the end did not signal a return to status quo. While the history of crises past seems to assure us that, one way or another, today’s will eventually recede, that history just as surely cautions us against assuming we can anticipate what the world may look like when it does.

James C. Cobb is the B. Phinizy Spalding professor emeritus of American history at the University of Georgia.