The South’s True ‘Lost Cause’ Was White Supremacy 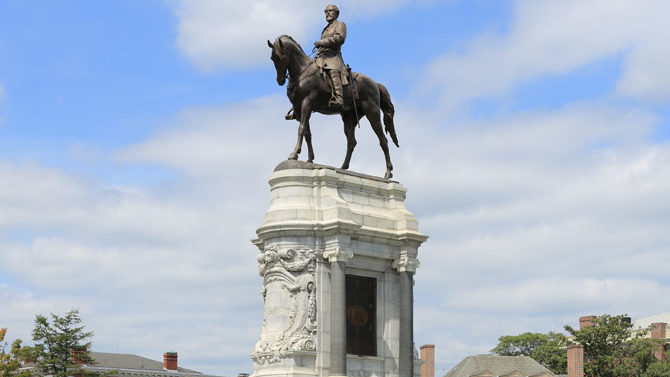 The Ol’ Bloviator has felt much like a meteorologist in hurricane season ever since last month’s horror in Charlottesville, VA, and is still suffering the aftereffects of what he can only describe as “Sudden Onset Relevance Syndrome,” triggered by an unaccustomed spike in interest in his opinion among members of the Fourth Estate. Bombarded with requests for interviews and commentary on this monument mess, he has been pushed to the brink of exhaustion by a steady procession of demands requiring his mouth or keyboard to operate in sync with the erratic discharges of his alcohol-ravaged synapses.

The O.B. has been talking to reporters on a fairly regular basis over the last 30 years or so, but the last few weeks have truly challenged his capacity for saying the same thing again and again while trying to make it sound original each time. He will say, however, that his most recent journalistic encounters have in the main been both rewarding and stimulating.

A case in point is a recent interview with the folks from the weekend version of NPR’s “All Things Considered,” where both his interrogator and the producer were kind enough to give him enough time to connect a few of his thoughts into a commentary that a generous sort might even deem semi-coherent. It was a bit of a different story in that respect with the folks over in London at the Financial Times, but if some 150 of the precious words out of that submitted piece wound up on the proverbial cutting room floor, it must at least be said that they were excised as smartly and skillfully as any of the O.B.’s many bon mots that have met with the same fate. (The caption, on the other hand, reinforces the O.B.’s longstanding perception that the task of writing these is invariably assigned to the biggest dimwit on staff.)

Although the implications of the recent tragedy in Charlottesville are clearly national in scope, it played out on a stage set by the historic insistence of generations of white Southerners on defining themselves by a defeat visited on their ancestors more than 150 years ago. Historian Carlton J. H. Hayes could have cited the example of the American South as those of Spain and Serbia when he observed that “a people may be more united and nationalistic through grief over defeat than through celebration of triumph.”

Even before the 1860s drew to a close, former Confederate president Jefferson Davis and other high-ranking military leaders began to assemble an arsenal of historical documents “from which the defenders of our cause may draw any desired weapon.” The carefully cultivated reverence for the valorous defenders of the South’s” Lost Cause” ultimately made its biggest impact not in writing but the tidal wave of physical representations of Confederate heroes that swept across the South between roughly 1890–1910. Inscriptions on these monuments lauded the brave guardians of “Anglo-Saxon” (i.e., white) civilization in a period marked as well by the rise of legally mandated racial segregation and the political disenfranchisement of all but a tiny fraction of the Southern black population. Not coincidentally, these years also witnessed the lynchings of approximately 2,000 black people, for the campaigns to strip away the civil rights of black Southerners were fueled by highly incendiary racial scapegoating, some of it by staunch advocates of plastering the landscape with Confederate memorials.

Meanwhile, measures like poll taxes or literacy requirements for voting were critical not only in  restoring white supremacy, but in determining which whites would be supreme, because these suffrage restrictions sharply curtailed political participation by both poor whites as well as blacks, the two groups most likely to vote against the conservative Democratic establishment. In the wake of disfranchisement, Republican turnout in South Carolina fell from 28 percent in 1880 to just 3 percent in 1896.

Similar figures from other states suggest that the so-called solidly Democratic, white supremacist South was not born but made, and, if so, Lost Cause monuments and mythology were among the critical construction materials. They are rightly condemned for their connection to slavery, which Confederate vice president Alexander Stephens called the veritable “cornerstone” of the new nation, but such a narrow focus does not do full justice to their pernicious importance to efforts to re-subjugate black Southerners as comprehensively as the rest of the nation would allow.

Sadly, that turned out to be quite a lot, as Northern politicians quickly lost their stomach for efforts to aid and protect the former slaves in the face of surging interest in exploiting the investment potential of a rebuilding region now intent on rapid economic modernization. The northern push for “reconciliation” entailed not only forswearing further interference in Southern racial affairs, but swallowing the Lost Cause propaganda package at a single gulp. Both requirements registered as faits accompli in an 1890 New York Times report on the unveiling of a statue of Robert E. Lee in Richmond, which declared that, just as Lee’s memory truly belonged to “the American people,” the monument was “itself a national possession.” Noting a profusion of Confederate battle flags at the ceremony, an elderly black man seized on the true meaning of the occasion for him when he exclaimed, “The Southern white folks is on top!”

Surprisingly, the flag’s widespread association with avowedly white supremacist organizations emerged only in the mid-1940s, when rising trepidation that the destabilizing forces unleashed by World War II might undermine the entire Jim Crow system. The Confederate banner was both more emotive and much easier to hoist at a cross-burning than a bust of Stonewall Jackson, and it quickly became a fixture at rallies and marches, not only of the Ku Klux Klan, but a variety of postwar neo-Nazi hate groups, not to mention a succession of fire-breathing segregationist politicians.

Despite the Confederate flag’s highly visible presence at the most appalling scenes of violence and bigotry that erupted in the 1960s and not infrequently thereafter, many white Southerners clung desperately to the idea that it actually symbolized “heritage, not hate.” Ultimately, it would take the 2015 slaying of nine black churchgoers in Charleston, SC by a young, Confederate flag-obsessed white man to shatter this long-implausible argument. The various furlings of the rebel banner in the immediate aftermath of this atrocity augured a similar fate for their bronze and concrete counterparts, at least 10 of which have been stripped of their prominent perches in the Southern and border South states in 2017 alone.

If there is anything affirmative to be salvaged from the wreckage of Charlottesville, it is that in descending on the city from all over the country and moving on to such far-flung locales as Boston and Berkeley, CA, the rampaging alt-right hordes may have finally vanquished the wishful notion that racial hostility in America bears the the imprimatur of a single region. At this juncture, certainly, the incalculable harm done by white Southerners who persisted in trying to separate “heritage” from “hate” leaves us only to tremble at the prospect of four years under a president who seldom bothers even to make the attempt.

Despite all the vitriol elicited by conflicts over these monuments, the O.B. has had but little flung at him—on this side of the pond, at least. On the other hand, the more than 200 comments affixed to the Financial Times piece online indicate that he has thrown a good number of the devoted readers of the FT into a state of high dudgeon. The trio that follow represent some of the O.B’s favorites among many excellent examples of the fine art of disparagement. If there is any solace to be taken from such a mass of opinions masquerading as fact, it could be that, as a group, the Brits are almost as ignorant of American history as Americans are.

“The best comments I have seen, and there have been many good ones, are those that address surprise that the FT would publish an article like this, not only incendiary but ignorant of the American South even at a basic level.”

“Don’t know if the author ever lived in the American South, but I expect not.”

And my personal favorite:

“Apparently this guy actually wrote a book about the South. Imagine the poor sods who end up reading it.”