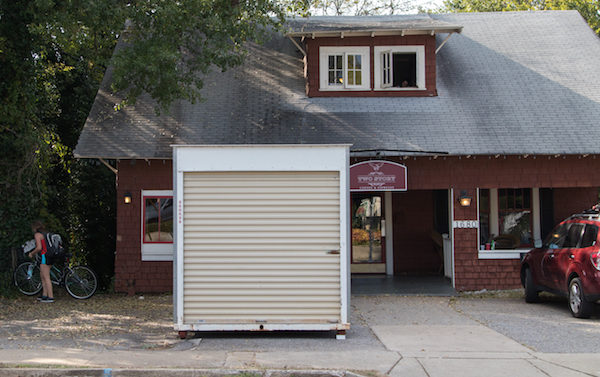 After years at its location on South Lumpkin Street near Five Points, Two Story Coffee is moving.

“It caught us off guard,” said Daniel Luft, Two Story’s general manager. The popular studying spot for UGA students now has until the end of the month to pack up and move out.

A storage unit out front is beginning to fill up, and employees are telling customers the news as they come in.

The business is working on an official announcement this week.

“It’s not the best, greatest timing,” Luft said of the move, just as the season starts to change. “It’s a big bummer.”

While the building will be taken over, likely by a bar or restaurant, according to Luft, the Two Story business will continue.

“People have heard rumors that we’re closing for good,” he said. “It’s not true.”

Management has been looking for a new location, but one property deal fell through. As the business continues to look for the perfect new location, Luft said they’re considering doing “pop-ups” at other locations around Athens.

“We don’t want to go dark completely,” he said.

Luft said the business hopes to relocate to somewhere else within the Five Points neighborhood, but has also been looking all over town, including downtown and in Normaltown.

With the new location, Two Story hopes for a better parking situation and plans to start selling alcohol, mostly craft beers and wine.

“We want to expand our live shows too, and that’s hard to do with just coffee. People don’t really want to drink coffee during a concert at night,” Luft said.

With the deadline fast approaching and no new building nailed down yet, Luft said a lot of things are still up in the air.