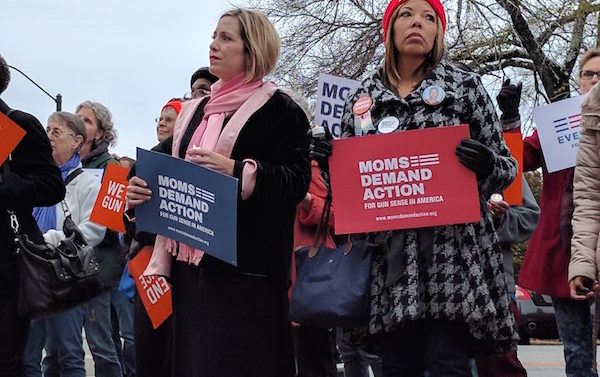 In response to the shooting at a church in Texas on Nov. 5 that killed 26 people, members of the Georgia chapter of Moms Demand Action for Gun Sense in America gathered at City Hall in Athens on Saturday for a vigil for the victims, as well as a call to action.

The event, deeply rooted in faith, began at First A.M.E. Church before marchers made their way through downtown to City Hall. Many of the roughly 40 people held signs calling for an end to gun violence and a repeal of Georgia’s campus carry law. During the procession, the group sang in unison, and was greeted by a church choir on the front steps of City Hall.

At City Hall, state Rep. Spencer Frye (D-Athens) and others local leaders and gun safety advocates spoke to the crowd about the need for a solution to gun violence.

“Leaders are turning a blind eye to the issue,” Frye said. “We’ve had two major massacres in the past, what, weeks, months? I can’t remember, there’s been so many of them.” The church shooting earlier this month killed 26 people, while a shooter in Las Vegas at the beginning of October killed 58 people before killing himself.

Frye blamed “lackadaisical” gun licensing and mental health institutions closing in Georgia, saying mental health is a big issue related to gun violence, and closing facilities do not help the situation. The gunman in the Texas church shooting had a history of mental health issues. Following the shooting, President Trump said the incident was caused by a “mental health problem” and not an issue with U.S. gun laws.

For an hour and a half, various advocates, many of whose children or other loved ones were killed by gun violence, told their stories. Several of them became members of Moms Demand Action and Everytown for Gun Safety after their individual tragedies. Chalis Montgomery, who is challenging Rep. Jody Hice in Georgia’s 10th Congressional District, was among those who spoke at the event, recounting when her cousin was shot and killed.

Those in the crowd were asked to recite a pledge to work for justice and end gun violence.

“Keep fighting the good fight, because people will listen and change will occur,” Frye reassured the crowd.