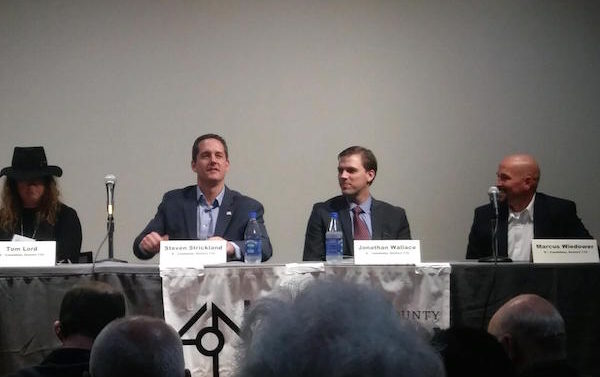 With the Nov. 7 special election drawing nearer, the candidates for state House districts 117 and 119 met Monday night for one final forum, organized by the Athens-Clarke County Federation of Neighborhoods at the ACC Library.

Candidates running in both districts responded to prepared questions from a Federation representative; much to the disappointment of both attendees and some of the candidates, they did not field questions from the audience, nor did they debate the topics.

Republican Houston Gaines and Democrat Deborah Gonzalez took to the stage first, starting out with their legislative priorities. For Gaines, that includes fostering business and economic growth while addressing education and transportation issues; for Gonzalez, improvements to education and public health, she said, would lead to improvements in other areas as well, including crime and mass incarceration.

The two predictably fell along party lines in most of their responses. Gaines stood in support of Second Amendment rights, calling for removing restrictions on where guns can be carried on campus, and advocating delaying health-care decisions until the future of the Affordable Care Act in Washington, DC is more clear.

Gonzalez took the opposite approach to those topics, supporting Medicaid expansion and arguing for a fresh look at health-care costs. “It shouldn’t cost you $285 for a Band-Aid just because you got it in the ER,” she said, while proposing more “community healers” and a possible special purpose local option sales tax for health care.

Both Gaines and Gonzalez agreed that Clarke County has been gerrymandered and supported a solution.

“We call it the Pac-Man district,” Gonzalez said in reference to District 119. “Democrats and Republicans are both responsible for this when they’re in power.” Gonzalez said she supports the idea of an independent redistricting commission. Gaines did not offer a specific solution, but promised to make sure “we don’t go back to what Gov. Roy Barnes and the Democrats did in the early 2000s, which was unconstitutional and thrown out in the courts.”

In his response to redistricting and other questions, Gaines often touted his endorsements and said he would bring a “unique perspective” to the state House. But later, when asked what’s unique about his perspective, he struggled to answer.

Again, the candidates fell along traditional party lines. The Republicans showed support for Second Amendment rights and opposed the Affordable Care Act, while Wallace advocated for greater access to health care and called for the repeal of campus carry.

“When over 10,000 people call the governor and tell him not to pass it and he does, that is government not listening to its citizens,” Wallace said in reference to when campus carry was a bill. “This bill that was passed was a mistake.”

“A gun is a tool, and in the right hands it can save lives,” Wiedower said. “A student shouldn’t have to forgo their right to protect themselves just to get an education.”

The three Republican candidates, for the most part, were similar in their answers, listing transportation and education as their top priorities, but stood out from one another on certain topics. Wiedower, a self-described “constitutionalist,” came off as the strongest supporter of Second Amendment rights and local control. Strickland frequently related the topics back to his advocacy for expanded broadband connections and investment in telecommunication. Strickland also differed from Wiedower and Lord on the solution to redistricting; while the other two believed elected officials should handle redistricting, Strickland sided more with Wallace and an independent redistricting commission, with computer software assisting in redrawing districts.

Wallace said he wants to see every district be competitive, and drawn as close to a 50-50 Democrat-Republican split as possible.

“Every time you step foot in the booth, you have the opportunity to hold our elected officials accountable, and I love that,” he said. Under his idea, he said, elections would be decided by which party gets more turnout.

District 117, between Gaines and Gonzalez, will be decided on Nov. 7, but with four candidates in District 119, a runoff between Wallace and one of the Republican candidates seems all but inevitable.

Race and Gender Are Issues Now in Athens House Race