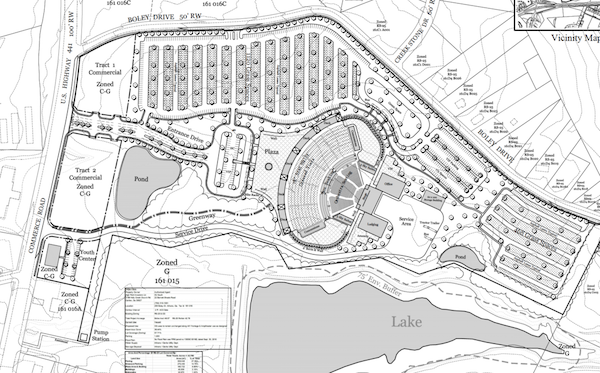 A local developer has filed plans for an 8,000-seat amphitheater off Commerce Road just north of the Loop.

It will host “mid-range bands” that are too big to play the Classic Center but too small for an Atlanta stadium, said James Warnes, the zoning lawyer for the project.

The developer is Clint Larkin, a former University of Georgia football player who lives in nearby Carlton and is also involved in the Hyatt Regency under construction next door to the Classic Center, Warnes said.

Part of the 49-acre parcel—which Larkin’s company, High Point Investors, bought for $250,000 in July—is zoned residential, so the project will require a rezoning to commercial-general. The ACC Planning Commission will get its first look at the project Thursday, Nov. 2.

Construction will take about a year from the time permits are approved, Warnes said.

Assuming the amphitheater is successful, a hotel and restaurants could be built on three commercial outparcels along Commerce Road, he added.

Larkin has not returned a call seeking comment, but ACC Commissioner Kelly Girtz, who represents that area, said he has spoken with the developer about buffering the the amphitheater from the adjacent Creekstone subdivision off Boley Drive.

“It’s set up to minimize any impact on the neighborhood,” he said.

Vehicular access would be off both Commerce Road and Boley Drive, but Warnes said off-duty police will direct traffic, so it should not be an issue. Some concert-goers will also arrive by bus or shuttle, he said, and the plans call for a link to the North Oconee River Greenway across the street.

A multifamily development was proposed on the property about 10 years ago, but commissioners did not want to extend a sewer line up Sandy Creek due to the potential environmental impact.

“This is a use of that parcel that wouldn’t require that level of sewer construction,” Girtz said.

The Athens Downtown Development Authority has kicked around an idea for an approximately 2,500-seat amphitheater on city-owned land near the Classic Center, but the Commerce Road amphitheater probably reduces the odds that the downtown amphitheater will ever be built, Girtz said.

At the same time, Classic Center Executive Director Paul Cramer has been eyeing that adjacent property for an approximately 7,000-seat arena, which he says could host concerts, large conventions, high-school athletic tournaments and possibly even a minor-league basketball team. He has said he intends to try to put the arena on the funding list for the next SPLOST referendum, which is expected sometime in 2019, although Girtz, for one, said he isn’t sold on the idea, and it could be a tough sell after a $25 million expansion in 2011 that barely made the list.

Warnes said he and Larkin have met with Cramer about their plans. “They really complement each other,” Warnes said. “Paul was favorable toward it.”

This Year’s Wild Rumpus Will Be Wilder Than Ever