This Year’s Wild Rumpus Will Be Wilder Than Ever 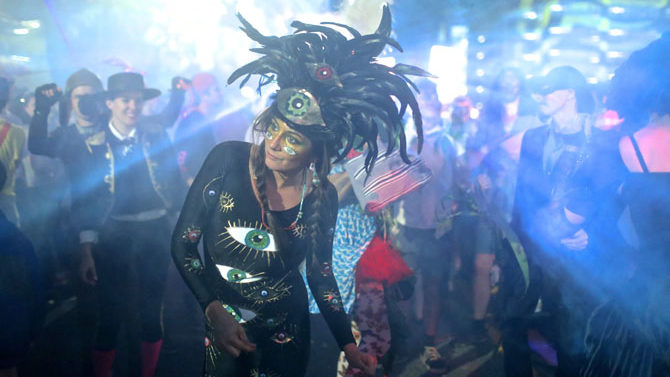 When Athens artist, musician and impresario Timi Conley yells out “Let the Wild Rumpus start!” to his thousands of followers at 8:30 p.m. Saturday, Oct. 28, launching the night-long bacchanal of costumes, music and general mayhem, he’ll be calling out from a new tower built specially for the annual event next to Live Wire’s Rumpus Rally beer garden (open from 6–8:30 p.m.), occupying an entire closed-off block of Hull Street between Dougherty and Hancock. Local bands Five Eight and Oak House will perform at the free warm-up event.

Wearing his be-tailed costume that evokes Maurice Sendak’s beloved character Max from Where the Wild Things Are, Conley will then lead his howling, drumming, high-spirited partiers on a winding parade through the streets of downtown Athens, ending up at Rumpus Land, near City Hall, for a Wild Things dance that will feature a massive sound and light system. Rumpus-ers will be treated to other entertainers, such as trapeze performers and fire artists. Later in the evening, the Georgia Theatre will keep the party going into the wee hours with the Royal Rumpus Ball.

This is the ninth Wild Rumpus that Conley will emcee, and he promises it will be the biggest and wildest yet. It’s a beloved Athens tradition that draws thousands of visitors to the city on Halloween weekend for a playful romp, bringing back fond memories of creative, uninhibited fun that for many makes Halloween the year’s best holiday.

Participants in the parade are expected to wear costumes, and many of them are outrageous hand-made constructions. Highlights of costumes worn for previous Rumpuses include a knot of Monty Python’s silly monks, serving wenches, a variety of Frankensteins and other horror-film characters, royal jesters, Mitt Romney’s infamous binders full of women, glittering popes and even Santa Claus, all propelled by the beat of dozens of percussion instruments. One small group of drummers even sported the red flower pots Devo wore in their “Whip It” video. Meanwhile, unbridled paraders howl and surge and swirl and dance as if no one but the moon were watching.

As Conley puts it, “Wild Rumpus is a primal and animalistic time to come out under the moon with a crazy mob of happy people.”

The festival begins with the Monster Mash, an event for children and their families on Friday, Oct. 27 from noon–3 p.m. at The Foundry, where kids will enjoy a “Mini Rumpus” with live music, a haunted house and a photographer to take pictures of little Wild Things in their costumes. Later that evening, The Foundry will also host a Wild Rumpus kickoff party featuring redneck-vampire psychobilly musician Unknown Hinson.

Over the past decade, the Wild Rumpus has grown from an impromptu parade to a weekend-long series of events. “In years past, the weekend prior to Halloween was unusually quiet in Athens, as many Athenians left town for the Georgia-Florida game,” says Linda Ford, co-director of the Athens Downtown Development Authority, one of the event’s sponsors. “Now, Wild Rumpus brings more than 7,500 people into downtown for a uniquely Athens, family-friendly event.”

Downtown companies and nonprofits are supporting the event with generous sponsorships, including Allgood Lounge, Creature Comforts, Graduate Hotel Athens, Live Wire and many others, including Flagpole. The Wild Rumpus also won $1,500 in the Athens Cultural Affairs Commission’s 2017 Arts in Community grant competition.

Proceeds from this year’s event will go to the Athens Nurses Clinic, a local nonprofit that provides free medical treatment to uninsured low-income residents of Athens and neighboring counties. In 2016, the event’s proceeds of $3,000 went to the Athens-based Georgia River Network.