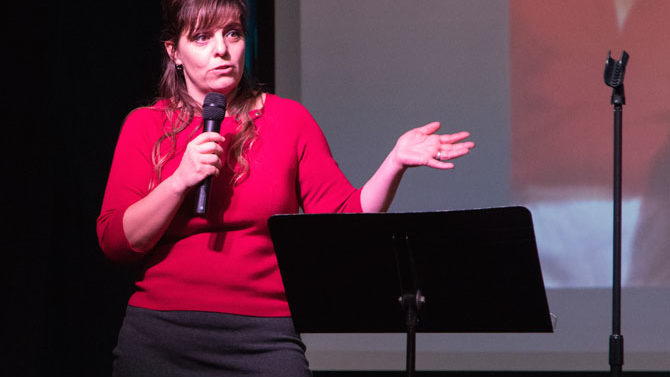 Shannon Martinez always felt like the black sheep in her family. Growing up in the 1980s, she had always been drawn to counterculture—so much so that for four years, Martinez was a skinhead.

Roughly 30 people turned out to Live Wire Athens last Wednesday to hear Martinez’s story of becoming a part, and eventually breaking free, of the white-supremacist neo-Nazi movement. Martinez’s speech was part of the Mediocre Education Hour monthly lecture series, which grew out of a popular local Facebook group for women called Mediocre Ladies.

Struggling with her identity throughout her teenage years, Martinez, now in her 40s and living in Athens, said she often turned to sports, primarily volleyball, to find a sense of purpose and belonging. She and her family moved from Philadelphia to rural southern Michigan while Martinez was in middle school, where she later began attending a private all-girls Catholic high school just across the border in Ohio. When a law regarding out-of-state athletes prevented her from playing sports, Martinez found a new outlet in the punk movement.

“They’re all misfits like me. Maybe I can find a sense of belonging here,” she recalled.

The big turning point was two weeks shy of her 15th birthday, when she went to a party, drank a lot of vodka and was raped by two men. “I didn’t know at the time that would be the pivotal pothole that would change my life trajectory,” she said.

Feeling she could not tell her parents for risk of being blamed for her own sexual assault, Martinez said she instead buried the trauma inside her. That unprocessed trauma eventually began to fester into rage, she said, and she discovered the angriest punk group on the outskirts of the scene—the skinheads. “They are my people,” she recalls thinking. “I wanted part of that rage.”

For the next four years, Martinez became a self-identified skinhead. She shaved her head. She got a Celtic cross tattoo on her leg, which is still there today. She began using racial slurs in her everyday speech. Soon, she moved in with a group of skinheads in Marietta. For her, it was a sense of belonging. “All I had to do to belong and have this sense of family was to say, ‘I hate brown people, I hate black people, I hate Jews, I hate anyone who doesn’t look like me,’” she said.

Living with other white-power people, the home became an echo chamber. “The way that hate works, in order to maintain a life of hatred, it has to continue to amplify,” she said. “You start singing songs, then you start using racial epithets, then you start drawing graffiti.” By the time she got out, Martinez was “running guns and throwing tear gas into nightclubs,” she said.

The white supremacy movement, she said, is built less on a shared ideology and more on the community surrounding it. “It has nothing to do with the ideology,” Martinez said, referring to white supremacist beliefs. “It all centers around the idea of community and value, the sense that I could go anywhere in the country and, because I looked a certain way and said special words, I was accepted.”

Martinez was able to escape the movement when she escaped the echo chamber by moving into her boyfriend’s mother’s house in Houston. By this point, her own family had thrown her out of the house, and while her boyfriend was also a skinhead, his mother challenged Martinez’s ideology and set boundaries. “She began to dream dreams that I couldn’t dream for myself anymore,” she said. “I had lost all personal value. I had all this unprocessed trauma, and I felt worthless. I had no value.”

That meant not talking with any previous friends or colleagues, skinhead or not. As a result, Martinez was often lonely. During one of many late-night drives to occupy her time, Martinez stopped at a church, sitting at a volleyball court nearby and gazing up at the moon, her “oldest friend,” she said. When a couple of other people found her and they all joined in a game of volleyball, one of Martinez’s favorite sports, she felt better. “You need something to fill in [the sense of community’s] place during the transition,” Martinez said.

Martinez later went to St. John’s College for a year, until her father stopped paying her tuition after she got pregnant and decided to have the baby, putting it up for adoption. After marrying the child’s father, the two moved to Annapolis, MD, where they started a family.

Her second child, her oldest son, brought with him a sense of closure, she said. Soon after he was born, the trauma of her rape years earlier finally hit her. “It was cathartic, because it was in the context of love for my son,” she said. Martinez’s seven children led her to strive to heal, she said, something she continues to do everyday, even 20 years later.

Martinez now does volunteer work for Life After Hate, a group of reformed neo-Nazis working to help other people leave white supremacy groups, utilizing her experience to assist others.