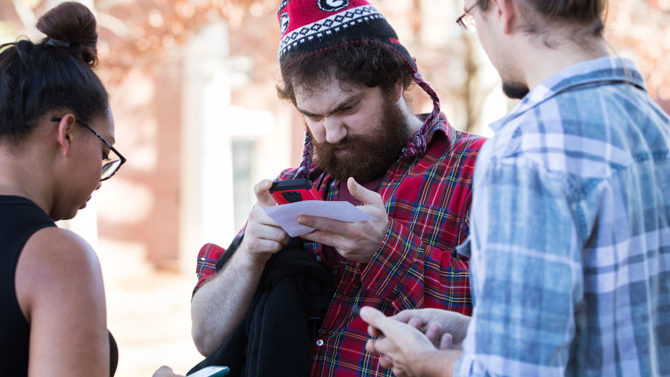 If the U.S. House of Representatives’ new tax bill is signed into law as it stands now, Kelly Peterson might have to reconsider graduate school.

“I would have to seriously consider whether I could continue my career as a graduate student or drop out and get a job,” the ecology PhD student says.

Rather than pay tuition, 44 percent of graduate students at the University of Georgia are involved in research or serve as teaching assistants, and in return receive tuition waivers and stipends, according to the UGA Graduate School. Under the current code, those tuition waivers are not taxed, but under the bill House Republicans passed last month, they would be considered taxable income.

“Our current tax burden is around $5,000,” says Gabe Rubinstein, a PhD candidate in the Department of Biochemistry and Molecular Biology at UGA. “If the bill passes, that would go up to $15,000.”

In an effort to push back against the bill, members of Science Policy Education, Advocacy and Research, a new student organization at UGA, organized a walk-out on campus as part of nationwide graduate student protests. Dozens of graduate students gathered on the North Campus quad last Wednesday afternoon, holding signs saying what their tuition pays for and calling Georgia Sens. Johnny Isakson and David Perdue, asking them to rectify the issue in the House bill.

“I’ve called my legislator quite a few times,” says Peter Smith, also a PhD candidate in biochemistry. “I’m talking to everyone I know about this bill, trying to raise awareness.

“We aren’t even allowed to get other jobs outside our department. It’s completely prohibited within the bylaws of our departmental contracts,” he says. “So there’s no other way for us to get income outside of research, and the tax bill would make it completely unaffordable.”

Professors are concerned as well, according to Smith. “They’re terrified of what this could to to the system we have now,” he says.

James Hamrick, a professor emeritus of plant biology, came out to support the graduate students, recalling the 36 master’s and PhD students he taught in his career, and citing the repercussions the bill and a subsequent drop in graduate enrollment could have. “I don’t know how universities will function without graduate students,” he says.

“I teach three sessions of ecology lab class,” Peterson says. “I think people underestimate how many undergraduate courses at UGA are taught by graduate students, and if it was harder for graduate students to come to graduate school, I think we’d quickly run out of teachers.”

“We’re the backbone of research in this nation. And if this bill goes through and grad students don’t come to college, that it will hurt everybody,” Rubinstein says. “It would set us all back.”

A spokesman for the UGA Graduate School said it is working with the Office of Government Relations to “make members of the Georgia delegation aware of the potential implications of the U.S. House tax bill on graduate education.” An internal email the Graduate School sent out earlier this month notes that the current Senate version of the tax bill does not include the provision affecting graduate tuition waivers.

The House tax bill passed on Nov. 16. In spite of the effect on thousands of graduate students in his district, Athens’ congressman, U.S. Rep. Jody Hice, voted in favor of it, calling the proposed tax code “simpler and fairer.”

The Senate version, which does not tax tuition waivers, was passed Dec. 2 on a strict party-line vote. The House can either pass the Senate version as-is, or the two chambers can try to negotiate a version that’s acceptable to Republicans in both. Activists are hoping the final version excludes the change to tuition waivers.

The expense of paying income tax on tuition waivers would make Athens “unlivable” for graduate students, even though it’s an “extremely affordable” city, says Rubinstein.

“We could maybe afford a terrible apartment and ramen,” says Joshua Marks, a PhD candidate in the Department of Chemistry.

“I couldn’t do that. I kick money back home, so I would just be done,” says Austen Scruggs, also a chemistry PhD candidate.