Sometimes a Little Pomp Is OK In Certain Circumstances 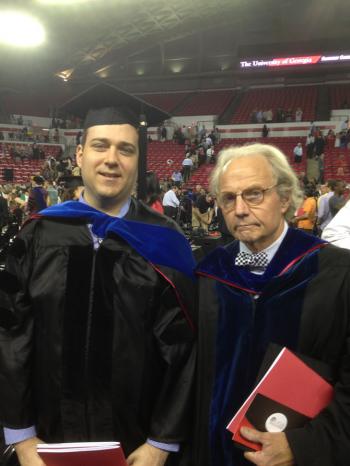 On a recent Friday, the Ol’ Bloviator attended what was surely his umpteenth-plus-several college commencement ceremony. This occasion marked the 21st conferral of the Doctorate on High on a graduate student who had endured the pure un-shirted hell of having the O.B. as a dissertation director. On graduation day, the director is invited to participate in the symbolic “hooding” ceremony that makes the whole business sound more like a Klan rally than an august recognition of great academic achievement. Although a Ph.D. candidate is not required to show up to have this unwieldy piece of academic regalia draped over him or her, the designation “Doctor” seems more authentic this way, as opposed to having your doctorate effectively presented to you by the mailman. (Think about that before you sign up to get one of those six-week Ph.Ds in molecular biology online.) Either way, of course, compared to “Doctor of Medicine,” the “Doctor of Philosophy” is way, way down the cachet hierarchy, but commencement at least gives us a couple of hours of the reinforcement that will be largely lacking in our desolate lives until graduation rolls around again. (Long ago, before he resigned himself to this reality, the Ol’ Bloviator ordered a gas credit card with “Dr.” preceding his name. Why he hoped to gain more respect or notice from gas station cashiers is unclear to him now, but the only time his more exalted identification appeared to really make a difference was when a woman behind the register at an East Tennessee convenience store looked at his card and said, “Doc, can you tell me what this here thang on my neck is?” So much for posing as the kind of doctor who could actually help anybody.)

Given the current job market for Ph.D.s in the humanities, it is unlikely that many of the recently minted variety are going to be bothered by autograph seekers anytime soon. Although the University of Georgia is surely the only institution of higher learning where those clutching brand new Ph.D.s are serenaded with a chorus of “Go, Dogs!” topped off with a solid round of “woofs,” the O.B. can assure you that this summer’s crew walked away with a lot more of their dignity intact than those who preceded them way back on June 7, 1969. The Ol’ Bloviator remembers this commencement with fondness, for it not only marked his receipt of the first of three degrees that would eventually make him a “Triple Dog” (n.b. the O.B. don’t do “Dawg”), but it came roughly twenty-four hours in advance of a much more important ceremony, indeed the single biggest event of his life, aka. his nuptialization with his beloved Mrs. O.B.

This particular graduation was also notable for other reasons, however. The proceedings unfolded in Sanford Stadium on a day with temps in the mid-90s. Attendance was mandatory for all graduates back then; so the stands were jammed with soon-to-be recipients of bachelor’s degrees, many of them clad in no more than Bermudas and T-shirts (if that) beneath their robes, their brains under relentless assault from the likes of “Indian Giver” by the 1910 Fruit Company via the ear plugs from their transistor radios. This is to say that for most of the ceremony, the undergraduate honorees were largely oblivious to the proceedings on the plywood platform especially constructed for this occasion. The platform itself was well-constructed and gave no visible reason for concern, but although gray seemed a suitably somber and institutional color choice, no one had checked to see what sort of finish this particular type of paint would leave, the upshot being that the platform floor and steps were, to put it in scientific terms, slicker than owl poop. It was certainly amusing to see the distinguished speakers making their way to the podium so unsteadily that they might as well been traversing black ice, but for some reason the most frictionless surface of all belonged to the steps from which the just-hooded Ph.D.s were to exit the stage.

Ladies and gentlemen, let me be clear that the O.B. is not talking about several or a good many or even most, when he promises you that not a single member of this unfortunate lot made it down the steps with his or her newly enhanced dignity intact. For the hot and bored candidates for baccalaureate degrees, it was as if they were suddenly watching the “Three Stooges’ Greatest Hits.” The newly invested “doctorati” were falling on their butts, their faces, their shoulders, their ribs and their thighs, each to a successively mounting chorus of side-splitting, britches-wetting, totally out-of-control guffaws. It finally got so bad that they tried positioning sheriff’s deputies alongside the steps to try to catch or at least break the falls of the suddenly humiliated honorees. On at least a couple of descents, the deputies simply could not handle the force generated by the involuntary, utterly unchecked descent of one of the heftier hood-ees, and they all fell sprawling together in a wriggling, thrashing, sweating pile of peace officers and plant pathologists. Needless to say, the undergraduate students couldn’t get enough of this spectacle and eventually even took to shouting out scores, “7.5, 9.5, etc.,” after each tumble. Needless to say as well, this may have been the first and only time a new crop of UGA Ph.D.s left Sanford Stadium more banged-up than the football team.

Sadly enough, faculty are not always immune to the temptations of anti-authoritarian behavior on commencement day. Since he is not quite sure about the statute of limitations on certain offenses in the Magnolia State, the Ol’ Bloviator had best just say that he knows of a certain immature junior professor at Ole Miss who objected to the strong-arm tactics of administrators who, at that point, did everything but demand a physician’s excuse when a faculty member missed commencement. Thus it was that, instead of getting himself all hooded, gowned and mortar-boarded up, at the appointed time, this young firebrand went out for a jog that, not coincidentally, took him past the commencement proceedings just as the faculty processional was forming. When cat-called to account by some of his colleagues in the distinguished assemblage, he proceeded to moon the whole bunch of them.

All of this happened, of course, before this brash and uncouth fellow grew up (albeit just a little) and began to experience the enormous satisfaction of helping some genuinely terrific students through the dark and bloody ground of graduate school and the particularly painful process of writing a dissertation. From what the O.B. understands, this recovering fanny-flasher even came to actually relish the opportunity to attend graduation and be part of the ritual launching of yet another student’s career. Indeed, the word is that, these days, as he slips into his dotage, this one-time rebel-without-much-of-a-cause beams his brightest when talking about the publications and other achievements, professional and personal, of his former students. As to graduations, he maintains just a touch of his former irreverence by steadfastly refusing to upgrade his ceremonial garb from the 1930-something robe given to him thirty-five years ago by an emeritus colleague and held together with staples and Velcro lovingly installed by its proud new owner. Much to the relief of this ol’ geezer’s colleagues, however, he shows no inclination whatsoever to bare his backside at commencement (cue faint strains of “Pomp and Circumstance” here), which has become, for him, a poignant reminder that whatever he may have managed to do for them, it is his students who have truly given him the best years of his life