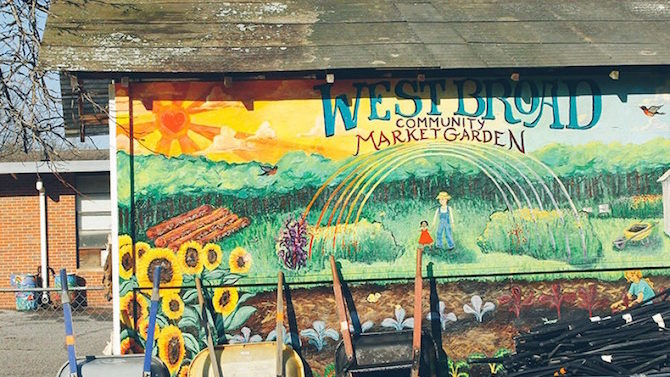 A clearer picture of what development in the West Broad neighborhood might look like in the future is beginning to emerge after an open house Sept. 15. The public was invited to share their ideas and concerns with the design firm, Lord Aeck Sargent, which was hired by the ACC government, Clarke County School District, Athens Housing Authority and Athens Land Trust to conduct a feasibility study to determine which sites within the area—namely the Hancock Corridor and Rocksprings neighborhoods—have the potential to be improved.

“We’re not necessarily saying this is what’s going to be done,” project manager Robert Begle said, referring to the multiplying number of ideas residents had written on a map. “We are looking at individual sites in the neighborhood and the neighborhood as a whole to see how they can be improved.”

Traffic safety and pedestrian/cyclist pathways were among the most popular sticky-note topics. “Clarke Middle students… use Baxter Street sidewalks a lot, so any widening of Baxter would have to include pedestrian safety as top priority,” one said. Another mentioned the difficulty of crossing West Broad on foot, and was tagged with scrawled affirmations of “I agree!!!” and “Yes!!”

One resident, Mary Bette Smith, has been living on Billups Street for 58 years, and said the use of her neighborhood as a cut-through for UGA buses is not only disruptive, but a broken promise. “The buses go up Dearing Street to Broad, instead of Rocksprings like they promised us,” she said.

Comments about the West Broad Market Garden were the most lengthy, especially demands to see the garden and farmers market remain unchanged. (School district administrators are planning to move into the vacant West Broad School and pave over the Athens Land Trust’s community garden.) “The building should be renovated to host local businesses, training facilities, educational kitchen resources for youth,” one said, while another suggested “a beautiful and thoughtful renovation of the school, preservation of the garden, and I’d love to see the building to house an African-American historical museum with stories/recordings of local Athenians.”

Begle added his own notes to the map, including one emphasizing the challenge zoning poses to preserving the “historic fabric, African-American history” of the Hancock Corridor.

The firm is using a 2013 UGA neighborhood study on the Rocksprings area as a point of reference, but because it’s three years old, some of the community’s priorities may have changed. “It’s a matter of determining which issues are still valid and need to be looked into right away, or asking, ‘Do these issues still exist?’” Begle said.

Organizers also asked for potential new names for the neighborhood. “East of Brooklyn,” “West Broad Rockers” and “Jesus Community” were some of the more creative titles, while the majority stuck with “West Broad Neighborhood.” (“Why change the name at all?” one note read.)

Begle said the firm will continue to receive public comment over the next month, and he projects the feasibility study will be concluded by the end of the year or early 2017. As of right now, he said, “this is not a full plan—there are options and priorities we will look at further,” but many of the common themes that are standing out to him are “a lot of the real basic, simple, unsexy things like new sidewalks, neighborhood lighting and new open spaces.”