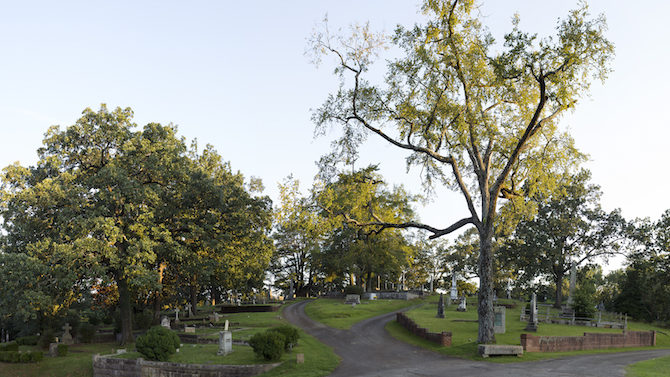 Staff members of the Athens-Clarke County Leisure Services Department and Oconee Hill Cemetery trustees presented plans and photographs of a proposed North Oconee River Greenway expansion through the property at an open house Aug. 30, assuring the boisterous crowd that no final decisions have been made.

The proposed Greenway extension would be an almost mile-long, multi-use path stretching along an existing sewer line that follows the riverbank, skirting the historic cemetery across East Campus Road from Sanford Stadium, where such notables as former U.S. Secretary of State Dean Rusk, Ricky Wilson of the B-52s, early aviator Ben Epps and numerous congressmen, governors and UGA presidents are buried. It would link to other completed sections of the Greenway to the north and south, increasing connectivity for pedestrians and cyclists.

While funding from SPLOST 2005 is already in place, the extension still faced a preliminary vote of approval from the Athens-Clarke County Mayor and Commission Tuesday, Sept. 6. Yet even if the commission votes to approve the plan, “we are at the mercy of the cemetery,” said Mayor Nancy Denson. Regardless of that vote, “if the trustees say no, [the plan] is dead in the water,” said ACC Park Planner Daniel Sizemore.

The proposed path will not affect any graves, Sizemore said, because the existing sewer line is located in the river’s floodplain, where graves cannot be placed. Furthermore, Leisure Services is giving cemetery trustees control over the aesthetic design and placement of signs, fencing and other features, as well as the ability to shut Greenway gates during funerals, he said.

“We certainly don’t want people to think this is a sealed deal behind the scenes,” said trustee Helen Mills. “I have concerns, but I am also excited at the same time about the potential [of the project].” Mills described Oconee Hill as a “living cemetery” because of the activity that already goes on within the area, which is open to cyclists and pedestrians during its operating hours.

“If people can be respectful and enjoy the cemetery as a green space, it could have great benefits,” she said.

For Carol Corina, however, the pathway would disrupt the primary purpose of the cemetery: to visit loved ones. “It’s a sacred place. There should be a reverent attitude. It’s not a playground or recreational area,” she said, citing the recent visits to the cemetery by “Pokémon Go-ers” as upsetting. “I think people can find other places to walk besides the cemetery that I just chose for my husband and myself,” she said.

As the exact route through cemetery property and other details are finalized, further negotiations are expected between Leisure Services and cemetery trustees in the attempt to both honor and protect the historic cemetery and provide a connective green space for the city. As Park Services Division Administrator Mel Cochran said, “Even if all the perfect stars align, we could still be two years away from completing the project.”

For those who couldn’t attend the public hearing, an online comment form is available here.