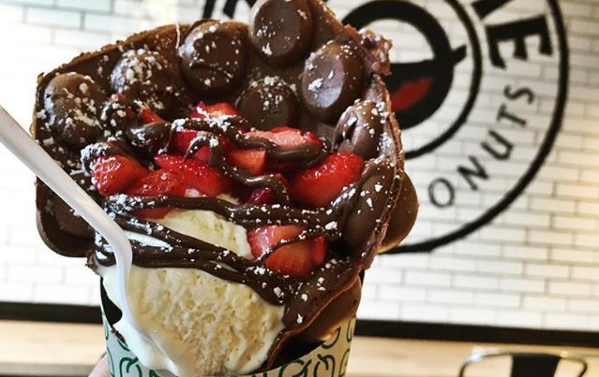 Joe Nedza is an undergraduate management student in UGA’s Terry College of Business. He’s also (like a lot of those students) a budding entrepreneur, but his business of choice isn’t an app or an enterprise solution. It’s waffles.

Nedza’s Waffles doesn’t have a brick-and-mortar location yet or much of a regular gig, but it’s moving in the direction of being more than an occasional pop-up. The waffles themselves feature big half-spheres and are folded into a paper cone, then topped with ice cream, fruit, Nutella and the like. They resemble the Hong Kong street food snack gai daan jai, which makes them eye-catching.

This all started as an idea of something I wanted to taste and play around with. The waffles are extremely unique in their look, flavor and texture. Once I figured out how to make them, I realized how delicious and visually appealing they were. As soon as I tried them, I let me family try them. They fell in love with the waffles.

I then decided to go, with my girlfriend, to any event that would have us and let us sell. We started at a swim meet and sold out. This showed us that we had a really cool product and idea.

Instead of taking things slow, we went from an event with 200 people to an event with 4,000; just to see if we could handle it. Turns out, we did exceptionally well and people loved us. I then decided that this could be something I could do as a real business.

One thing we really love doing is complimenting people, so we decided to write personal compliments on each cup to show people how great we think they are. We are currently doing pop-up shops and festivals. The goal is to have a standing location/food truck in the near future.

Nedza adds that, although so far he’s mostly used sweet toppings and fillings, he has plans for chicken and waffles, as well as a pizza waffle. The waffles themselves are made from scratch, to order.

You can find Nedza’s outside Fuzzy’s Taco Shop on Washington Street downtown tomorrow, Saturday, Sept. 3, starting around 3 p.m. (and possibly running as late as 8 p.m., but more realistically until the batter is gone).