New Rutherford Hall Pays Tribute to the Old One 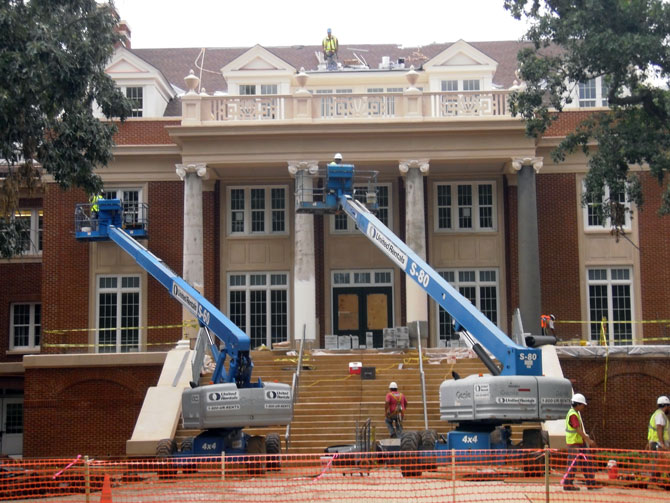 Despite the protests of many preservationists, historians, faculty, students and alumni throughout the country, Rutherford Hall was demolished last June.

The women’s dormitory was built in 1939 by the Public Works Administration under President Franklin D. Roosevelt’s New Deal program. Located on what is now referred to as Myers Quad (though Myers Hall was not built until 1953), Rutherford originally served as a dorm on the Women’s Campus alongside Mary Lyndon Hall and Soule Hall. 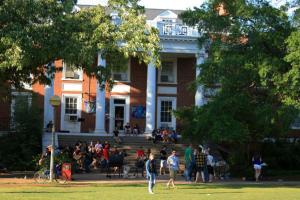 While Myers, Mary Lyndon and Soule were all retrofitted within the past 10 years, Rutherford was not as lucky. Several factors contributed to the demise of Rutherford Hall: The UGA administration determined that it was not well built to begin with, as with many PWA projects. The administration also deemed the cost of retrofitting it to be too high. And, as a dormitory, it had undergone significant damage over its 73-year history.

While many people, including me, were upset to lose Rutherford Hall, I am excited to see the new version, which is scheduled for completion next month.  The new dorm gives a nod to the old in many ways.

For starters, it has nearly the same footprint. Though the new building is larger, featuring 260 bedrooms and housing 100 more students than its predecessor, it still maintains the historic shape, with the main body of the building running parallel to Myers Quad and matching wings running perpendicular to the quad.  It features the same grandiose stairway topped with a columned portico.

When word of the demolition spread, one of the major concerns was the porch. Rutherford Hall was known for its porch, and like any good Southern home, the porch played a vital role in the community and social atmosphere of the dorm. (Russell Hall, while full of freshman memories for me, sadly lacked a porch; instead students were encouraged to gather around the big-screen TV.) The pediment-topped portico on the back, or street side, of the new building also matches the original.

The new building also maintains the gabled dormer windows above the portico but has an additional strip of windows between them to allow more natural light into the building. The new building will also feature dormer windows in the wings. While the fenestration patterns of the old and new Rutherford halls are the same, the new version has wider and taller windows. Like the additional dormers, the larger windows will bring in more natural light. The windows also match those on the addition to Myers Hall and other new buildings on campus, such as Tate II and the Special Collections Library.

The rooms in the new dorm are double and single rooms with private baths. There are also multiple laundry and kitchen facilities, study and computer rooms and a large gathering area for social events. To continue both the social and historic thread of the building, the layout and footprint of the original parlors and fireplaces have been maintained. Though the new fireplaces are not functional, the original mantles, featuring mosaic tiles placed there by past residents, have been refurbished and will be reused. There are also four original paneled doors, taken from former bedrooms, that will be used as wall treatment in the gathering area. The exterior light fixtures and ornamental railing on the outside gardens will also be reused. Although the Office of University Architects wanted to reuse the columns from the back portico, they were not able to, since the columns varied in length from one to another by as much as three inches.

While the preservationist in me always wishes historic buildings could be saved—not only for historic integrity but also sustainability—I am still very much excited at the prospect of seeing the new Rutherford Hall once it is completed. The architectural renderings look great, and I think it’s wonderful that the architects have paid homage to the old building, not only by creating a visually similar building but also by using salvaged elements from the old.  New memories will be created by the students who live in the new Rutherford Hall.