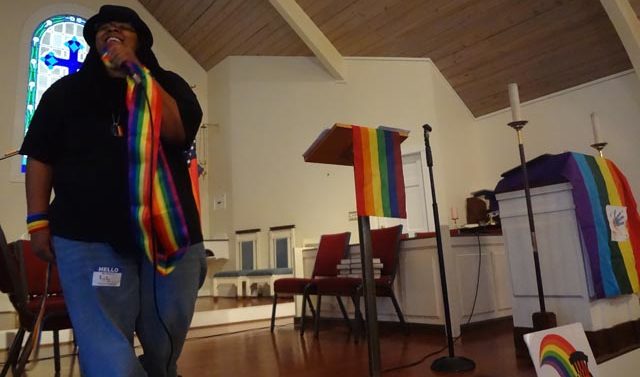 DeeDee Kane’s week started off on a sour note.

The University of Georgia professor and head of GLOBES learned Monday that the UGA Foundation would not fund health insurance for the domestic partners of gay and lesbian UGA employees, including her own partner.  Kane feared the U.S. Supreme Court would deal the LGBT community another setback today by upholding the Defense of Marriage Act.

“This morning, for me, started out with some trepidation,” she said. “Are we going to get some more bad news or some good news?”

It was good news. The Supreme Court struck down DOMA, and more than 50 people gathered earlier this evening to celebrate at the UGA Episcopal Student Center. One activist, Ricky Roberts (pictured above), even broke out into song.

Kane acknowledged that many people feel frustrated and angry that they have to work so hard to win equality.

“In Massachusetts, I had marriage rights and full benefits, if I needed them, for my partner,” she said. “In Georgia, I’m a different person to some people, but not to myself. But as my mother said, ‘Life’s not fair.'”

But she and others were optimistic that they would win in the end. The Rev. Renee DuBose of Metropolitan Christian Church paraphrased Martin Luther King Jr.: The arc of the moral universe is long, but it bends toward justice.

“I believe in my heart we will have marriage equality in the state of Georgia,” said Melinda Sheldon, deputy director of Georgia Equality.

It will require more hard work. Roberts urged listeners to keep pushing for domestic partner benefits and to convince state legislators to pass a law banning workplace discrimination based on sexuality.

DuBose went even further, calling for another vote on the 2004 amendment to the state constitution that banned gay marriage and civil unions.

“Remember how sick and frustrated you were in 2003, 2004?” she asked the crowd. “How you cussed and kicked something? Well, this (the DOMA ruling) is retribution for that.”

It passed with 77 percent of the vote (including 52 percent in supposedly progressive Clarke County), but she noted that support for same-sex marriage has risen to 55 percent nationwide, according to at least one poll, including 68 percent among young people.

“I think we should bring it back up for a vote,” DuBose said. “I think we can beat ’em now.”

Based on Georgia Equality’s polls, Sheldon was not so sure.

“It may not surprise you we don’t have as much support here as we do when you poll all Americans,” she said. “It’s still in the 30 percent (range). So the first step is education.”

Sheldon and other experts are still trying to parse what the ruling will mean for Georgians. Same-sex marriages in other states still won’t be recognized here, and partners won’t be eligible for federal tax breaks for married couples or Social Security benefits because they’re under the control of states, she said. However, Sheldon expects the military to “act really quickly” to offer benefits like health insurance to same-sex partners, and the Obama Administration will make other federal benefits available in the coming weeks, she said.