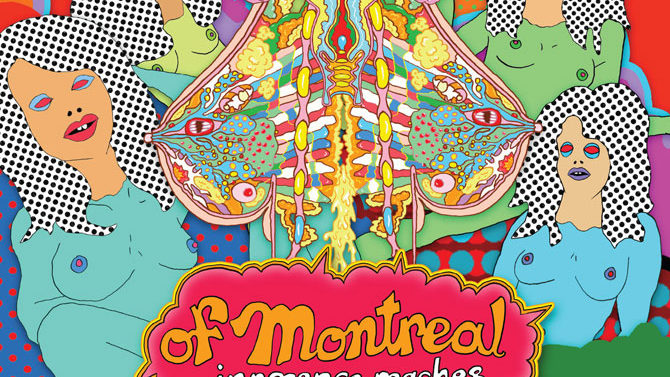 (Polyvinyl) “Am I on the verge of a really big breakthrough/ Or just another meltdown?” muses Kevin Barnes on “Gratuitous Abysses,” the third track on of Montreal’s latest offering. It’s a good question for the prolific band, which has released 14 LPs in 20 years, to ask itself. Here, Barnes takes his cues from revamped rave culture as opposed to artistic indie rock—the sonic palette from which the band initially sprung. Keen listeners won’t be surprised to learn that former members Davey Pierce and Nicolas Dobbratz, who comprise two-thirds of local electro group Yip Deceiver, rejoined of Montreal’s touring unit prior to the making of the record; traces of their trademark skittering dance-pop are palpable throughout.

On “It’s Different for Girls,” Barnes blends indie and EDM while waxing theoretical about gender, announcing that women are “de-personalized, aggressively objectified“ over funk guitars and drum machines. Barnes is at his best when he harnesses those basic electronica tactics, as on opener “Let’s Relate”—another gender-centric electropop treatise—or “Trashed Exes,” both of which channel the mid-career freak-pop of Beck while making statements that are wholly nouveau.

This is undoubtedly new territory for a band that has made a career of never lingering in the same sonic space for too long. So, is Innocence Reaches a big breakthrough or another meltdown? Most certainly.