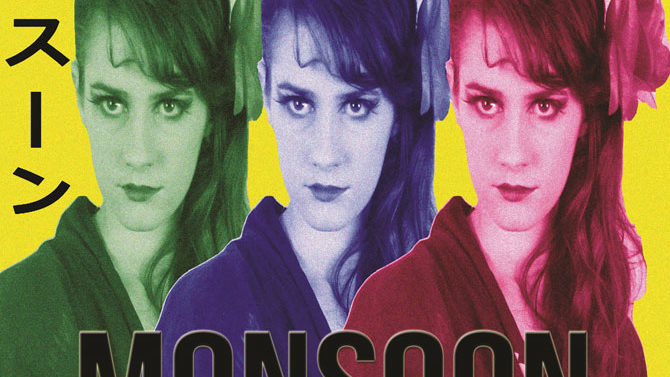 It’s hard not to root for Monsoon. A homegrown band through and through, the group is the ideal of what a music community ought to cultivate. Led by Sienna Chandler and backed by Scott Andrews on bass and vocals and Joey Kegel on drums, the buzzworthy act has garnered plenty of attention in the run-up to the release of its debut, Ride A’Rolla.

There’s hardly a moment on the album when Chandler’s voice isn’t front and center. Her code-switching between Japanese and English on the record’s title track is, at times, a bit disorienting. Still, the vocals stick with you—for better or worse.

Much of Ride A’Rolla harkens back to the tempered aggression of ‘90s pop-rock. Chandler’s “come and get me, boys” lyric, from “Tuck Me In,” explicitly echoes Gwen Stefani’s bring-it ‘tude and vocal tone. Even as distorted guitars blaze behind rollicking drums, the sounds on the record seem at odds with the lyrical content. “The Devil’s Muse” would benefit in particular from being taken to a darker place, instrumentally. There’s also a surprising share of skronky surf-guitar riffs (see “Geriatric” and “Monsoon”).

Ride A’Rolla is messy, but it finds some success, most notably when slop and pop converge. It’s a difficult combination to harness, but the young band finds its stroke when its music gets slightly derailed.

EDITOR’S NOTE: This review originally stated, incorrectly, that Monsoon emerged from Nuci’s Space’s Camp Amped. Though Chandler was a Camp Amped participant, the band formed outside of the program.