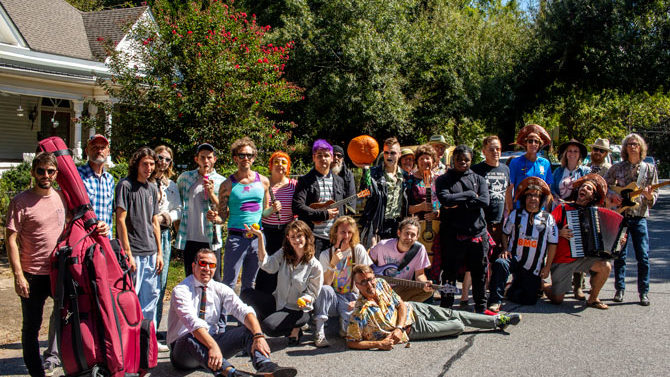 You may be familiar with the “porch festivals” in nearby cities like Decatur, where people open up their front porches and yards to the community to enjoy some live music (and maybe some refreshments and games, too). Well, now it’s Athens’ time to shine. On Sunday, the Classic City, with its rich music history and abundance of local bands, will be home to the first Historic Athens Porchfest.

On Oct. 6 from 1–7 p.m., homes in four local neighborhoods—Boulevard, Newtown, Buena Vista and Pulaski Heights—will host 69 bands. The music ranges across all types of genres, so everyone can be sure to find something they like. The Historic Athens website has an interactive map that gives locations and directions to the performances and is sortable by the hour, so you can plan out your schedule for the day. (The map is also embedded below.)

“Porchfest provides us with an opportunity to celebrate some of the most incredible historic neighborhoods in the Southeast while also celebrating our community’s heritage and music,” says Tommy Valentine, executive director of Historic Athens. (See more about the organization—formerly the Athens-Clarke Heritage Foundation—here.)

All the bands playing Porchfest are either local or have ties to Athens. The main drive for doing this, as explained by Valentine, is to bring together the community to learn more about their neighbors and the creative talent that’s right in their backyard.

“Porchfests are a growing movement around the country to celebrate local culture and musical heritage,” Valentine says. “It really seems to bring neighbors together and give people a sense of who their neighbors are. That’s something that we think there is a real appetite for here.”

Porchfest organizers initially suspected they would have to recruit bands to perform, but after the application opened for musicians to play, they received dozens of sign-ups in just a week, proving that Athens is eager for such a festival. Because of the large number of performances, there will be multiple concerts per hour throughout the afternoon, with a “very special” show during the last hour at Mayor Kelly Girtz’s house, which will be the only performance during that time.

The matching of the porches with the performances was a bit like a blind date. People living in the featured neighborhoods were invited to open up their home to the festival, then the organizers of the event matched the performers to each house. “Each host is encouraged to effectively work with the band to create an experience for the visitor,” Valentine says.

Another notable pair-up will be Athens-Clarke County Commissioner Tim Denson, who will be performing on fellow commissioner Melissa Link’s porch. Denson, who says he originally came to Athens for the music scene, has a musical history of his own, having played in several different bands. He will be performing solo at Porchfest, partly because he says his wife, Jenny, with whom he was formerly in a band, “doesn’t want to come out of retirement.”

Porchfest needed involvement, planning and excitement from many different parties to get on its feet, including performers eager to showcase their talent, fans wanting to come out, homeowners in historic neighborhoods, local businesses to sponsor and volunteers working behind the scenes to plan each detail. Saeed Phillips, a second-year student at UGA and a special event intern for Historic Athens, helped plan the logistics of the event.

“I’m excited because we go to school here, but we don’t really know much about the outskirts beyond, like, the Arch,” Phillips says. “So, I feel that any chance for me to get involved in the community is important to me, considering how much the university reaps the benefits of the local community. We always go these homogeneous UGA events, so I feel like Porchfest is a fresh and creative event that students will enjoy.”

The festival was strategically planned during an away football weekend, so Dawg fans and Athenians can enjoy the event without worrying about missing a game or dealing with heavy crowds. Historic Athens hopes to grow Porchfest every year and make it something that people of all types will mark their calendars for, to learn a little bit more about the people living next door.