Terrapin Is Using the Sun to Brew Beer 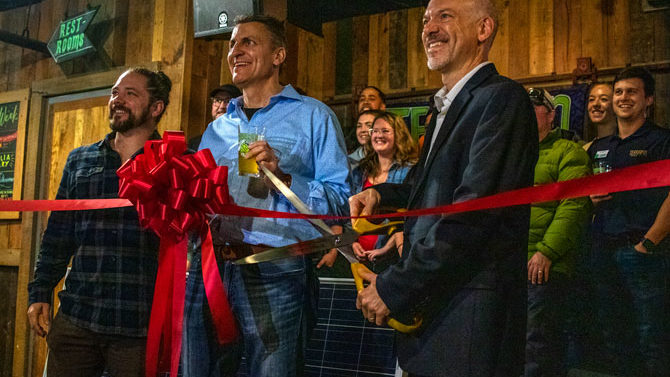 While sipping suds with friends at one of Athens’ local breweries, beer fans can know they’re supporting a company that’s committed to environmental sustainability.

Terrapin Beer Co. has taken steps to minimize its impact on the environment, referred to as “terraprint” by the brewery. Some of the practices the brewery implements in its day-to-day work include recycling, composting and a wastewater pre-treatment facility. Through the multiple terraprint projects, people are “starting to think differently and our behavior is starting to change,” says company president Dustin Watts.

Last year, the Georgia Water Coalition recognized Terrapin in its “Clean 13” report, recognizing “individuals, businesses, industries, non-profit organizations and governmental agencies whose extraordinary efforts have led to cleaner rivers, stronger communities and a more sustainable future for Georgians.” Breweries use more water than most businesses, but Terrapin has reduced its water usage by 20%.

It’s also working with Atlanta-based Cherry Street Energy—chosen in consultation with the UGA Office of Sustainability and Athens-Clarke County Sustainability Officer Andrew Saunders—to install solar panels on the roof of its Newton Bridge Road building and solar panel sunshades in the parking lot. In contrast to something like pre-treating wastewater, “solar is kind of a sexy thing,” Watts says. “It’s easy to understand what it does.”

Once installed, the panels will provide Terrapin with 30% of its total energy. “It’s solar brewed beer now.” Watts says. That means up to 339 tons of the greenhouse gas carbon dioxide won’t be released into the atmosphere—the equivalent of saving 362 acres of forest or taking 65 cars off the road.

Terrapin’s solar array will be the largest of any craft brewery in Georgia, as well as the largest of any business in Athens, according to Watts. “We want to be bigger than beer,” he says. “Beer is a huge part of who we are, and beer is great because it brings people together. With this terraprint project, it’s showing how we are bigger than beer.”

And, says Cherry Street founder Michael Chanin, it’s the first installation in Georgia where a company is buying solar energy directly. Cherry Street was founded to take advantage of a 2015 state law that allowed third-party vendors to sell solar energy, and has installed solar arrays for the cities of Atlanta and Macon. In Terrapin’s case, Cherry Street is installing solar panels at no charge to Terrapin and selling the power they generate to the company at a rate less than what Georgia Power charges, Chanin says. In the future, Cherry Street will expand the array and add batteries.

Terrapin isn’t the only brewery in Athens taking steps to create a greener environment. Creature Comforts has made steps to run on more sustainable business, as well.

According to head brewmaster Adam Beauchamp, Creature Comforts is committed to sustainable practices by complying with all applicable environmental regulations, preventing pollution whenever possible, educating staff and empowering them to contribute to its sustainability program, and to continually improving over time by striving to measure environmental impacts and settings.

Because Creature Comforts is located in two historic buildings—the old Snow Tire facility downtown and Southern Mill in Boulevard—there was no need to use all-new materials to construct a new building. The design of the brewery itself also has tons of natural light, which cuts down on the usage of indoor lighting. And when they do use lights inside, they’re all LED. Creature Comforts also has an internship through the UGA Office of Sustainability, which brings in students to brainstorm new and better sustainability practices for the company. One of their recent projects was cutting down on the usage of hot water. The company has invested in more energy-efficient equipment, such as a natural gas-burning boiler that burns 10–40% less natural gas than a standard boiler.

“A typical brewing system may be 80% efficient in terms of how much sugar is able to be extracted from the barley. This system is 95% efficient,” Beachamp says. “It actually saves about 1,000 pounds of barley for every 85-barrel batch of [flagship IPA] Tropicalia we brew over our old system.”